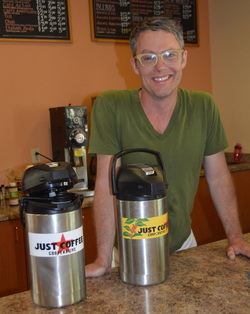 In May of 2013 I travelled to Madison Wisconsin to learn about cooperatives and Fair Trade in that city.  It was my pleasure to meet with Matt Early, co-founder of Just Coffees.  Mat is a close friend of Chris Treter, founder of Higher Grounds Coffee of Traverse City Michigan. (See entry #14 of January 11, 2011 below about Higher Grounds.)   Both men are committed to Fair Trade as a vehicle for economic and social change, and each supports and speaks highly of the work of the other.   What is special about Just Coffees and Higher Grounds?   There are many attributes, but as an introduction I will focus on the words of Matt Early:  ‘It’s all about Transparency, Cooperatives, and Small Farmers.”

Complete Transparency:  The Just Coffee website, gives the price per pound paid to producers.  In addition, Just Coffee posts contracts, invoices, bills of lading (that give shipping costs), and organic certification documents.  Currently there is a number on each bag of coffee that allows the consumer to look up the origin of that coffee on the company’s website.  Soon, the company will offer QR (Quick Response) codes, readable on a smartphone,  on the bags to give consumers an even easier way to get that information about the product.  For more information about Just Coffee, its mission, practices, and projects, see http://www.justcoffee.coop/.

Leaders of many mission-based Fair Trade organizations, including Just Coffee and Higher Grounds, are deeply concerned that Fair Trade USA’s new policies show that Fair Trade is being co-opted by conventional businesses that have entered Fair Trade for profit-based reasons.   This is part of why Just Coffee and High Grounds are no longer using Fair Trade USA certification and turned to the new Small Producers Organization, which launched a “Small Producers Seal (SPS) in 2010.  The organization is devoted to increasing the visibility of small producers in the Fair Trade marketplace.  For more information about the Small Producers Association and the SPS see http://fairworldproject.org/voices-of-fair-trade/small-producers-organizations-at-the-forefront-of-fair-trade/

Cooperatives? That’s a BIG topic that I will talk about in another blog soon!

I am a mom, teacher, learner, writer, lawyer, violinist, environmentalist in process, traveler, and avid reader. My professional title is Professor of Sustainability and International Business Law, and my passions are interwoven with my professional work in sustainability, Fair Trade, microfinance, and related areas.