Medical advice—long under the authority of doctors and public health officials—is now freely available on the Internet, and nowhere are the effects of this trend more visible than around the issue of vaccines. The web provides easy access to the kinds of criticism of vaccines that was once available only from fringe natural-health booksellers and alternative medical providers. In an effort to counter these claims, mainstream healthcare providers offer orthodox scientific and medical information to consumers on the Internet. The result is a set of competing claims online that are nearly impossible for parents to reconcile into a coherent plan for vaccinating their children.

Reports of two court cases have recently emerged online that powerfully demonstrate how readers on either side of the debates over the safety of vaccines are armed with evidence to support wildly divergent views. Among mainstream medical providers, the widespread consensus is that there is no causal link between vaccines and autism. However, over the last several weeks, news has circulated on alternative medical sites about two federal court decisions that “confirmed … that there is a link between the MMR [measles, mumps, and rubella] vaccine, autism, and stomach disorders.”  Citing court records, news reports (which have also been published in mainstream sources like the Huffington Post) purport to show “repeated admissions by drug companies and government alike that vaccines do in fact cause autism.”

Here are the facts of the cases: The federal court that hears cases of people allegedly injury by vaccines has recently decided in favor of the parents of two children who say that their children developed symptoms of autism because of the adverse side effects of vaccines. The so-called“vaccine court,” which was established by the 1986 National Childhood Vaccine Injury Act, is charged with resolving vaccine injury claims and provides compensation from a trust fund that is financed by a 75 cent excise tax on every vaccine. Vaccine manufactures are protected from lawsuits because the vaccine court hears claims and pays injured parties from the trust without ever assigning fault. The court typically pays out between $100 and $200 million per year.

In the first case, the court decided that a 10-year-old boy from California named Ryan Mojabi suffered a “severe and debilitating injury to his brain, described as Autism Spectrum Disorder”that was caused by brain swelling that occurred after he had been vaccinated with MMR. As a result, Ryan now suffers from the symptoms associated with autism. He was awarded an undisclosed amount that could total $10 million or more.

In a second case, which had been in and out of court for nearly a decade, 15-month-old Emily Moller had developed a high fever and seizures after being vaccinated with the combined vaccine against diphtheria, pertussis, and tetanus. She has been diagnosed on the autism spectrum. Late last year the case was settled, and Emily will receive an estimated $9 million in compensation.

These cases provide a tremendously powerful rhetorical weapon to those who claim that vaccines can cause autism. Reports of the cases are circulating widely on the web, and they add fuel to the online debates that confront new parents as they seek out information on vaccines. Both children had suffered from rare but documented adverse side effects from being vaccinated, and in both cases serious long-term damages are evident. It is doubtlessly unfortunate that these children were injured in the course of receiving routine vaccines, but cases like theirs are very rare, and vaccines safely protect the vast majority of children against diseases that once caused considerable death, injury, and discomfort.

How, then, did we end up in a situation where incredibly uncommon cases like Ryan’s or Emily’s have so much rhetorical power?  And, what are we to make of these two cases?  The problem, I submit, does not reside in the vaccines themselves, but in the fact that we have failed to have honest conversations about difficult issues related to vaccines.

Today’s concerns about vaccines can be traced to allegations that emerged in the late 1990s of a link between vaccines and autism. In Britain, a preliminary report by a research team suggested that the MMR vaccine might sometimes damage children’s digestive tracts, which in turn might lead to developmental disorders associated with autism. At about the same time, as part of an overhaul of the Food and Drug Administrative, reports emerged that a mercury-laden preservative—Thimerosal—had long been used in childhood vaccines. The symptoms of mercury poisoning share many similarities with autism and public health authorities had long warned parents of the dangers of heavy metals like mercury and lead, so parents were shocked to learn that their children had been injected with vaccines that contained mercury.

Both of the scientific controversies that alleged an association between vaccines and autism were resolved by 2004. Today, the consensus of the scientific and medical communities is that neither the MMR vaccine nor Thimerosal is responsible for the recent rapid increase in the diagnoses of autism. Instead, most authorities point to increasing awareness, relaxed diagnostic criteria, and a number of social and economic incentives for diagnoses to explain the increasing rate of diagnoses.

While the scientific controversy over the alleged link between vaccines and autism has been resolved for almost a decade now, the political controversy has continued to rage. Advocates of the claim that vaccines cause or trigger the symptoms associated with autism have developed an alternative set of news sources to provide evidence to those who believe that vaccines are unsafe and that the government and mainstream media are covering up the evidence. As the potentially complicated discussions about the merits and potential problems of the modern vaccine schedule have become confined almost entirely to the vaccines-cause-autism debate, advocates on either side of the issue promulgate irreconcilable claims. 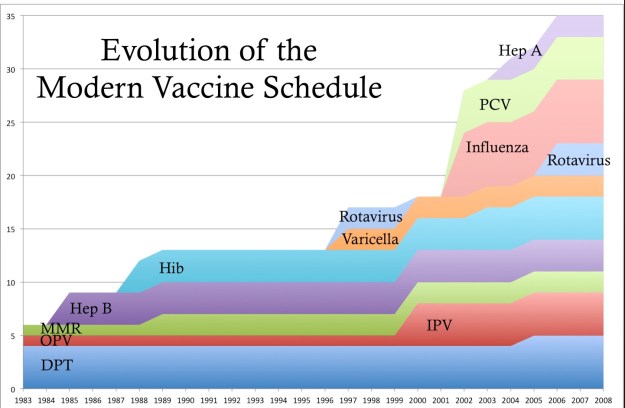 The total number of shots in the routine vaccination schedule up to age 6. Image by the author.

In my 2012 book Vaccine: The Debate in Modern America, I argue that the rapid increase in the size of the vaccine schedule and Americans’ increasing concerns about vaccines were not merely coincidental. Under today’s vaccine schedule a fully vaccinated 6-year old will have received about three dozen inoculations of over 50 vaccines, most of them in the first 18 months of life. This has motivated considerable concern among parents about unintended side effects of vaccines. About 40% of American parents report that they have intentionally refused or delayed a recommended vaccine for their children, and about 1 in 8 parents have refused a state-mandated vaccine. Safety concerns about new vaccines and a widespread belief that we give too many vaccines, too early, against too many diseases are at the root of many parents’ concerns. Vaccine-anxious is the term I used for people who expressed concerns like these while generally accepting that vaccines are usually safe and effective. Elsewhere, I have argued that we ought to be very careful about mistakenly labeling vaccine-anxious people as anti-vaccinators. In terms of maintaining high levels of vaccine compliance, they are effectively “swing-voters,” and it is vital that we keep them within the fold. By mislabeling them as anti-vaccinators, we push them into the arms of those who have amassed ample evidence to support their fears about unintended side effects from vaccines.

Concerns that vaccines might cause autism are actually a proxy for a much more complex set of concerns, which I describe in the book. Some of these are practical, like how we cram as many as six vaccinations into one office visit. Others are moral, because half of childhood vaccines were researched and produced with the use of cells derived from aborted fetuses. Still others are deeply philosophical, including concerns that we have entered a realm of medical enhancements that fundamentally alter human beings. The vaccines-cause-autism proxy debate allows us to avoid actually engaging these complicated topics. It also allows many different views to gather under a single set of claims, which explains why criticisms of vaccines are launched by voices from every corner of the political spectrum.

The two cases from the vaccine court that have generated so much discussion among opponents of the modern vaccine schedule are influential only because we have failed to engage the real issues that animate the vaccines-cause-autism proxy debate. Until we do, the large and active community of people who express serious concerns about vaccines will continue amass evidence that will adversely affect the decisions of millions of vaccine-anxious parents.

Mark A. Largent is a historian of science and medicine and an Associate Dean and Associate Professor at Michigan State University. His teaching and research focus on the role of scientists and physicians in public policy debates. His most recent book, Vaccine: The Debate in Modern America (Johns Hopkins, 2012) analyzes the vaccine-autism debate and contemporary concerns about the modern vaccination schedule. He is currently completing a book on the history of Reye’s syndrome.