This week marks Campus Sustainability Week across the U.S. Many campuses are putting extra efforts into sharing the ideas and possibilities behind approaches that might make our present and future more habitable for all. The overwhelming emphasis on most campuses when talking about sustainability is environmental sustainability. Most often this is synonymous with greening or being green. Or if you’re at Michigan State University  Be Spartan Green.

This level of green is a more narrow green than the international green movement which shares Ten Key Values as noted in an earlier blog, The Color of Green.

But, while many if not most enter the sustainability pursuit through the environmental entrance, once on the path it is difficult to ignore the many other entrances and the larger systemic perspective that is a more robust, or some suggest deeper sustainability that includes as equal partners the social, political, economic, and spiritual dimensions. Sara Parkin, an early pioneer in both the Green and Sustainability movements, whom I have written about several times recently, perhaps shares this best at the end of her recent book, Positive Deviant: Sustainability Leadership in a Perverse World. 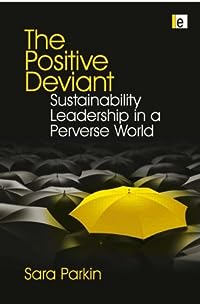 As we square up to a fiendishly difficult couple of decades that will determine whether the 21st century is a human triumph or tragedy, there is a search on for a new logic in which to make sense of what to do next. For me, and I hope by now for you, the only logic that seems to fit the bill is sustainability, where growing environmental and human and social capital in pursuit of a good life well lived becomes the purpose of the ‘toil and bustle’ of our lives. In that logic there is what Susan Neiman calls a philosophic basis for understanding the difference between the actual and the possible, and a framework for getting there (Neiman, 2009 p.92).

A cautionary word. We will have to mobilize all our leadership skills to defend this new logic. ‘It’s unrealistic’ will be the most common objection you will hear. But don’t fall for it. Calls for reality are calls to lower your expectations. The counter question has to be: ‘Where will your reality take us, what logic is it pursuing?’ Arguing for sustainability means that, if we want the ideal, we will have to strain very hard for it. Aim high and we might get most of it, if not all. And even if we do fall short, that is likely to be good enough. Aim low and we are bound to fail. Being asked to accept the realpolitik means bowing to someone else’s reality.

Part of championing sustainability will mean differentiating it from an ideology. That is a bounded collection of ideas, like Thatcherism or socialism, which, if applied to a given situation, is expected to come up with a recognizable solution or policy. As we are surrounded by the failure of the ideological approach to governing and to solving the very ‘wicked’ (complexly interrelated) problems we face, why develop another one? Gillian Tett remarked that it is the finance world’s lack of interest in wider social matters that goes to the very heart of what went wrong (Tett, 2009). No, sustainability is not a hard-edged ‘ism’. Nor, though it is a new way of thinking about the world around us and our place in it in a more spiritual as well as practical sense, is it a religion. Sustainability is more like a moral obligation, something that can take each of us in a different way even though we may be joined by a commitment to a similar end. Because we are all starting from a different place, there are many paths to sustainability. Anyone can join in without taking an oath or paying a membership fee.

…If the world is not what it should be, it is up to us to open our eyes and close the gap between what is, and what ought to be. If we want moral clarity, she [Susan Neiman] says, we have to put it there. We have to do the living in truth. We have to do the right thing. No one can do it for us. Our ideas and our words must be powerful, of course, but in the end it will be our actions that are convincing.(Parkin, pp.259-260)

From another wonderful little collection of short memoirs from some sustainability pioneers recently published under the title Small World, Big Ideas we see how each of these leaders found their way onto the trail of sustainability. Remember that sustainability as a worldview is an emerging idea that has taken root in many places as these memoirs show. We hear from Carlo Petrini, Italian founder of the Slow Food Movement; Satish Kumar, who was a Jain monk then walked from India to Russia to Paris to London to Washington DC to carry a message to abolish nuclear weapons; we hear from Bob Brown, Australian environmentalist and member of Parliament; Polly Higgins, UK Barister who has been developing the legal case for ‘ecocide”; Jane Goodall, who has worked with our kin the chimpanzees for nearly 50 years; Franny Armstrong a UK filmmaker and activist; Caroline Lucas, UK first Green party Member of Parliament; and others including here Vandana Shiva, nuclear physicist turned activist. Shiva writes

We face multiple crises – the ecological crisis, including climate, biodiversity, and water; the economic crisis of deepening poverty and emerging poverty; and a social and political crisis of democracy. These crises are interconnected, as in the solution. As I look ahead into the future, I see my activism guided by the paradigm of Earth Democracyu based on living democracy, living economies, and living culture.

To create living democracy, we have to widen our embrace to include all life on Earth, the Earth community; we have to move from representation to participation.

To create living cultures, we have to move from greed to caring. At the heart of this transition is care for the Earth. That is why I am aprt of an emerging movement for the Rights of Mother earth. On the rights of the Earth are based human rights and rights of future generations. The Earth is calling us to be Earth activists and Earth Citizens. If we listen, we have a future. (p.122)

In the end it is our actions. How do we align our highest aspirations for what a good society should be with our own choices and actions each and every day. I’m still puzzling over the gap between my own aspirations and my actions. But I can start again on that integrity realignment even now. That  would be more than talkin’ about sustainability.

Happy Campus Sustainability Week one and all!!! As Captain Picard would say, “Make it so.”