Here are a couple of maps of different landscapes just I just made today. The top landscapes are “smooth” and the bottom ones is “rugged”. Smooth means that if you start anywhere on the map, there is a route to the highest point on the map that only goes up. Rugged means that there are multiple peaks. The bottom right is more rugged than the bottom left. Update 11/15/13: the smooth landscape depicted on the top is not un-epistatic. There is epistasis (interaction between gene or mutations), as can be seen if you imagine moving from the bottom left corner to the either neighboring corner: fitness doesn’t change. However, if you start in the middle of one of the axes and move parallel to the side, then you will cross the hill: fitness does change. In other words, what value one trait is when the other is changed can result in different changes in fitness, which is exactly what epistatic interactions mean.
In evolutionary theory, a fitness landscape is a map where fitness is a function of either the genotype or the phenotype. The genotype is some description of the genetic make-up of an organism. This can be the DNA or a list of the mutations/alleles, and are discrete variables. The phenotype is the complete set of physical and biological features of the organism (e.g., weight, height, wing-span, hair color, number of limbs, blood-type, probability of courting a female, temperature tolerance, etc., etc.). A phenotype component can be either discrete (number of limbs) or continuous (weight). Both the genotype and the phenotype of real organisms are multidimensional, having very many different axes describing each component of the type.
Fitness – aka reproductive success – is then a function of the genotype or phenotype, and is represented by the height in the maps above. An evolving population will seek the highest point it can. In the smooth landscape it will not have trouble finding the highest point on the map (the global peak), because there is only the one. However, when the landscape is rugged, the population may initially ascend a peak that isn’t very high, and it can potentially get stuck there. The problem in evolutionary dynamics is then how populations cross the fitness-valleys between peaks in order to ascend adjacent peaks that are higher. Several papers in recent years have addressed this problem (e.g., Weissman et al, 2009; Østman et al., 2012).
Here is the fitness landscape of Aspergillus niger, a filamentous fungus. 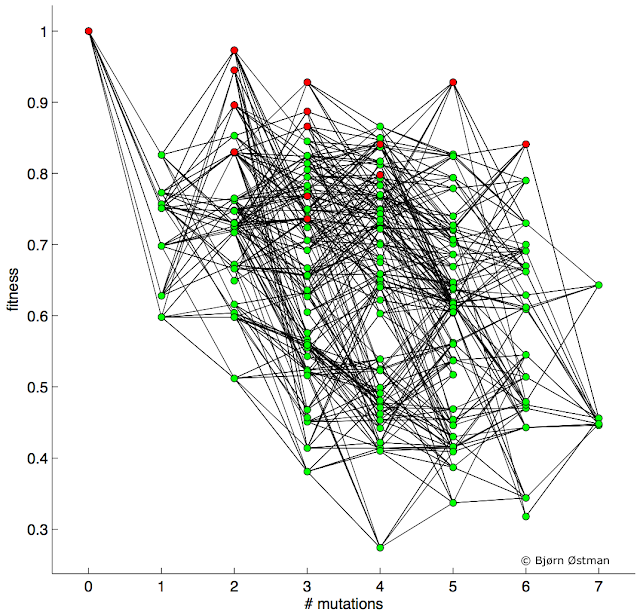 The data is taken from Franke et al. (2011). Here the data is fitness as a function of genotype. The data is displayed such that an arbitrary genotype is on the left at zero mutation (call it the wild-type), and every other genotype is displayed a distance away on the x-axis equal to the number of mutations away from the wild-type. Lines between genotypes indicate that the two genotypes differ by only one mutation. Peaks are genotypes whose neighbors (genotypes one mutation away) all have lower fitness, and are displayed in red.
The structure of fitness landscapes is informative about evolutionary dynamics, i.e., how populations behave as they evolve. Just a quick glance at the Aspergillus niger landscape make it apparent that a population could potentially get stuck on one of the lower peaks if it started out way over on the right of the landscape. Whether the population can cross the valleys to the global peak depends on both the population size and the mutation rate. The more mutations in the population (given by the mutation-supply rate, the product of population size and mutation rate), the higher the chance of crossing valleys. See Østman and Adami (2013) for more on how these three parameters enable prediction of evolutionary dynamics, or this post with some more details and a video: Can we predict evolution?
References:

Østman B, Adami C (2013). Predicting evolution and visualizing high-dimensional fitness landscapes. To appear in “Recent Advances in the Theory and Application of Fitness Landscapes” (A. Engelbrecht and H. Richter, eds.). Springer Series in Emergence, Complexity, and Computation, 2013.
– See more at: http://pleiotropy.fieldofscience.com/2013/11/smooth-and-rugged-fitness-landscapes.html#sthash.vMFV620p.dpuf