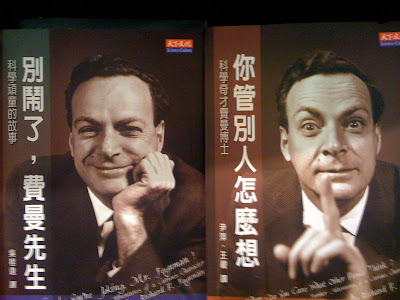 Some interesting finds in this 1966 AIP oral history interview with Feynman.

I have always felt that Feynman was cognitively a bit “lopsided” — much stronger mathematically than verbally. This might be partially responsible for his way of learning — it was often easier for him to invent his own solution than to read through someone else’s lengthy paper. (Personality factors such as his independent streak, and his strong creativity, also play a role.) But this sometimes left him with gaping holes in knowledge. In contrast, Schwinger had at age 17 an encyclopedic understanding of what was known about quantum electrodynamics — he had read and mastered all of the literature as a high school kid!

This excerpt reveals that Feynman did not understand the conventional formulation of QED even after Dyson’s paper proving the equivalence of the Feynman and Schwinger methods. (When someone explained the action of a creation operator on the vacuum, Feynman reportedly objected “How can you create an electon? It disagrees with conservation of charge!” :-)

… I was struggling gradually to learn. I mean, I had to learn something to prove the connection between my thing and the same thing. Dyson had done a great deal in that direction. That didn’t satisfy me because I couldn’t follow that. Dyson told me, when he wrote his paper, “Don’t bother to read it, there’s nothing in it that you don’t know, except that it proves it’s the same as what everybody else knows, but it doesn’t say anything different or do anything different than is in your paper. Nothing more in it,” he told me.

… Yeah, because I remember him telling me not to worry about the paper. It hadn’t anything in it, you see. … But then I thought I had to understand the connection, for publication purposes and others. And I had a good opportunity, because Case sent me his theorem — the manuscript of a big paper that he was going to publish in the Physical Review, which had all the steps of the theorem. Now, I argued in the meantime with myself, in my usual physical way of arguing, and concluded for several physical reasons, by some examples and other things — simpler examples that weren’t so elaborate as the calculations I made — that it couldn’t be true that the two methods would give the same result. … I prepared a letter in which I wrote the physical arguments. Then I decided, that isn’t going to convince him. Nobody pays any attention to physical arguments, no matter how good they are. I’ve got to find a mistake in the proof. But the proof has creation and annihilation operators and all kinds of stuff. So I went to some students, in particular Mr. Scalator who was only fair, but he understood. He had learned in a pedestrian way what it all meant, and he explained to me what the symbols meant. So I learned like a little child what all this was about, so I understood what the symbols that he was using in the paper meant, and I tried to follow the proof, and I learned enough to be able to do that kind of mathematics, see — for the first time. So I followed the whole thing through, and I found a mistake, a very simple algebraic error, in the proof. He commuted some things that didn’t commute and so on.

Weiner: How about Tomonaga’s work? When did you first hear of it?
Feynman: I don’t know when I first heard of it. The work itself, I never knew exactly what it was, and I don’t yet know precisely what it was.
Weiner: You read his paper?
Feynman: No.
Weiner: I mean, there’s one paper that is often cited —
Feynman: No. No. I don’t think I read the paper. But this must be understood — I don’t mean anything disparaging. If Schwinger hadn’t been in the front yard at Pocono, or next to me, I wouldn’t have known what he did either. I got the same as everybody else. If you can do it yourself, why learn how somebody else does it? So I don’t know precisely what the relation of Tomonaga’s and Schwinger’s work is or the relation of his and mine. I think the relation of Tomonaga’s work to my work is very small. I mean, I think he’s gone around much closer the direction that Schwinger went.
Weiner: I think it’s the general impression.
Feynman: But I don’t know the precise relationship of their work. But I believe, if I’m not mistaken, although you’ll have to ask Schwinger, that everything that Schwinger did he did without knowledge of what Tomonaga did. I hear, but I don’t know, that Tomonaga did a very great deal, and did essentially what Schwinger did, except perhaps for working on certain practical problems. I don’t know. That’s what I hear. But I don’t know. I’m sorry, that sounds stupid, but I have never looked into it, and I never read Schwinger’s paper in a comprehensible way. I don’t know what’s in that paper of Schwinger’s.
Weiner: Haven’t tried to read it?
Feynman: Never. Tried in the sense that I looked at it and I flipped the pages, because it’s too hard. I read it at a time when I didn’t even know what a creation-annihilation operator was. I read it — you probably can prove that by the fact that I refer to it in various places, and get certain formulas out of it — I read it in the same way that I talk to him. When something looks like something, I know that’s it, you know? But I didn’t follow all the steps. I never followed all the steps.
Weiner: But you did know, when you talked to him at Pocono, and then —
Feynman: I know Schwinger — that’s what I say, I must have read it in pieces and bits. I know what Schwinger did; I know more or less how he did it. …

Feynman: Yes, because we talked together, we had the physical idea of what starts it, but there’s a difference from that and checking all the equations, … I don’t know whether he really read mine in detail or not. But he knows what’s in it, and I know what’s in his, but I can’t tell you. Perhaps if I look at his paper carefully, I can see that I really did read it, you know? I mean, I’d have to have it and look at it and see if I did read it. That’s a good way to look. I doubt that I read it in detail. I doubt that I looked at all of the various complicated sub-things that he had to worry about, like what to do with the longitudinal waves — because I don’t think there’s any problem with the longitudinal waves. I couldn’t pay attention to such a thing, see? So I doubt that I’ve ever read the paper in any careful way like a student would try to learn it. I don’t believe I’ve ever done that.

Finally, an interesting conversation between Feynman and Oppenheimer concerning the covariant propagator and positrons as electrons moving backwards in time:

So I went to the Physics Society and gave this paper, and I wanted Professor Oppenheimer to hear it, and other people like that. I particularly wanted Oppenheimer to hear it because he often said that there wasn’t anything to it. He understood Schwinger’s and he didn’t understand mine. And I thought he would be at the meeting. I’d kind of half thought about him when I prepared it. When I went to the meeting, he wasn’t there, but I gave the paper, and then Weisskopf got up and said, “This paper is so important and unusual” and so on “that we ought to give the man more time to express his ideas.” … Then I stepped down, and just at that moment, Oppenheimer came in and sat down in the chair just ahead of me. And he turned around and said, “What did you talk about?” I said, “The idea of electrons going backwards,” meaning positrons. He said, “Oh, I heard all that. Oh, yes,” he said, “I heard that stuff, right? That stuff I heard.” I said, “Yeah, you’ve heard it, but you’ve never understood it.” Now, the response to that was an invitation I found in the mail when I got back to Cornell, to come to Princeton to the Institute and explain all my ideas, in as many lectures as I wished, two a week, as long a time as I wanted, expenses to be paid by the Institute, and so on. He’s a very great man, I know. I mean, I understand him. We’re good friends. You know. I mean, it’s not enemies. I said that because I was trying to get something across to him, that he didn’t understand it. That was honest. He knew that if I were driven to say that that was true — you know what I mean — and it was worth learning. So I said that, and his response was very generous — any length of time I want, any conditions. So I went to the Institute of Advanced Study.

In his eulogy, Schwinger described Feynman as “… the outstanding intuitionist of our age …” :-)

Note added: I recalled another anecdote related to this post. At his Pocono talk Feynman was repeatedly asked by Dirac “Is it unitary?” (referring to Feynman’s diagram method deduced from the path integral). Unfortunately, Feynman did not seem sure what “unitary” meant and responded “perhaps it will become clear as we proceed…” (a trick he learned from an earlier Schwinger talk). Feynman also did not seem to know what an S-matrix was!