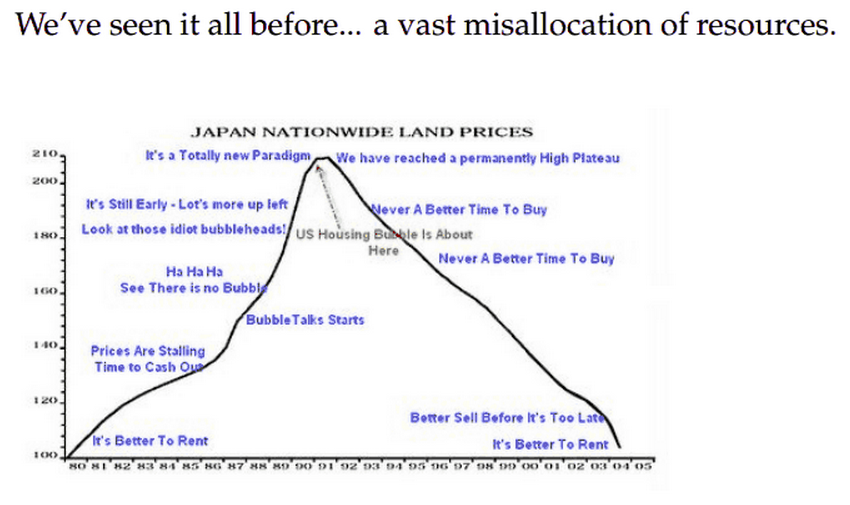 I thought it worthwhile to re-post my 2008 slides on the credit crisis. I wrote these slides just as the crisis was getting started (right after the big defaults), but I still think my analysis was correct and better than post-hoc discussions that are going on to this day.

I believe I called the housing bubble back in 2004 — see, e.g., here for a specific discussion of bubbles and timescales. The figure above also first appeared on my blog in 2004 or 2005.

(2004) … The current housing bubble is an even more egregious example. Because real estate is not a very liquid investment – the typical family has to move and perhaps change jobs to adjust to mispricing – the timescale for popping a bubble is probably 5-10 years or more. Further, I am not aware of any instruments that let you short a real estate bubble in an efficient way.

Finally, there was a lot of post-crisis discussion on this blog and elsewhere about mark to market accounting: were CDO, CDS oversold in the wake of the crisis (see also The time to buy is when there is blood in the streets; if you want to know what “leading experts” were saying in 2008, see the Yale SOM discussion here — oops, too embarrassing, maybe they took it down ;-), or was Mr. Market still to be trusted in the worst stages of a collapse? The answer is now clear; even Fannie and Freddie have returned $180 billion to the Feds!