If you say you believe in something, what is it that you mean by that? For example, if you say you believe you will find a hundred-dollar bill today, what is that belief built upon?I posit that what you actually believe (as opposed to what you say you believe) is really based on probabilities. Perhaps not accurately so, but all future events are of course unknown, though some come very close to 100% certainty, and it is thus really the only way to predict anything with any kind of accuracy.

Trivial example: If you roll a die, you might say that you believe you will get a six. But if we assume this is a fair die, you must assess that the chance is about one in six, so your belief should really be that you do not get a six. In that case you really can’t have a rational belief that any one side will come up, though you do of course know with almost 100% certainty (i.e., 100% probability) that one of the six numbers will come up (the die could land on an edge).

In science we make models. That is the essence of the scientific endeavor. A model is basically some explanation of something; hypotheses and theories at opposite ends of a spectrum of explanatory depth are models. So if you as a scientists say you cannot imagine how something would work, how something could have happened, etc., then you basically aren’t doing your job. People who dismiss science as rigid and uncreative have not understood what it really entails. Coming up with explanations is among the most creative things people can do. If you’re writing a work of fiction, it would surely be defeat if you cannot think of a way to make something click in the story. Same thing with science. If you observe something and you can’t imagine how that could occur, then get to work!

For example, why do I think John Travolta said Adele Dazim when referring to Idina Menzel at the Oscars?

Hyp1: He was high as a kite and just mixed up some slightly related names.

Hyp2: Someone played a joke on him and told him that was her name.

Hyp3: It was on purpose because he thinks that Adele Dazim is a prettier name for her.

Hyp4: He wanted to rock the establishment to secure a role in a new indie film.

Hyp5: He has an occasional speech impediment. 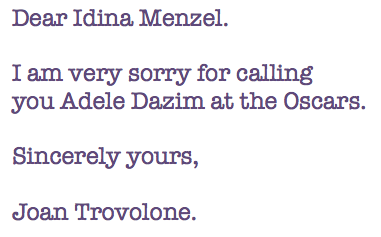 I can assign probabilities to each of these. It may not be accurate (they don’t need to add to one, and can actually add to more than one since they overlap somewhat), but at least approximate values or perhaps just a relative ranking of them. Each of these hypotheses could be tested, and my personal belief doesn’t really have much to do about anything. I don’t yet have any evidence either way, and evidence is of course the only thing we can really base rational belief on, though oftentimes that evidence is reflected in theories about, say, human behavior, in which case I can say I find Hyp1 more likely than Hyp6, because I have seen evidence of only one of them happening before.

The answer is evidence. If you have none, they you have no reason to believe anything. Hypothesizing is not the same as believing, and can be done freely without repercussions. At least that is how things ought to be, everywhere and always.