I’m busy reviewing ~200 promotion and tenure cases for my day job, so I don’t have much time to post about the BICEP2 observation of primordial gravitational waves via their effect on the polarization of the cosmic microwave background (CMB). Instead, I refer you to Sean Carroll, Lubos Motl and Liam McAllister (guest poster at Lubos’ blog).

Assuming the result holds up, it strongly supports inflationary cosmology, and indicates that the inflation scale is only about 2 orders of magnitude below the Planck scale ~ 10^19 GeV (which would, presumably, turn out to be the true scale of quantum gravity). 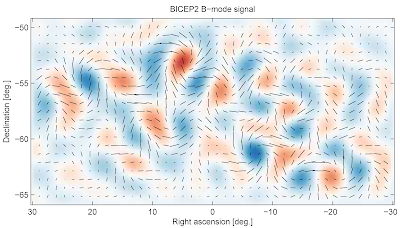 In inflationary cosmology the gravitational waves which left the polarization signal arise from quantum fluctuations in de Sitter space. As with the CMB temperature, observers on different branches of the wavefunction of the universe see distinct polarization patterns on the sky. Since the CMB temperature fluctuations track energy density, these different observers also see distinct patterns of galaxy formation. In fact, whether or not an observer (a planet or galaxy) exists in a particular region of spacetime depends on the branch of the wavefunction (i.e., on a measurement outcome). I can’t tell a Copenhagen story that makes sense of this — there is no way to place observers like ourselves outside of the quantum state describing the CMB!

I guess I’ve said this all before 8-)

In fact, the interpretation of quantum mechanics is not entirely disconnected from practical issues in cosmology. The cosmic microwave background data favors inflationary cosmology, in which the density perturbations in the early universe originate in the quantum fluctuations of the inflaton field itself. It is very hard to fit this into the Copenhagen view — what “collapses” the wavefunction of the inflaton? There are no “observers” in the early universe, and the locations of “observers” (such as humans) are determined by the density perturbations themselves: galaxies, stars and planets are found in the overdense regions, but quantum mechanics itself decides which regions are overdense; there is no classical system “outside” the universe! It seems much more natural to note that differential scattering of gravitons due to more or less energy density in a particular region separates the inflaton wavefunction into decoherent branches. (The gravitons decohere the inflaton state vector through interactions.) But this is accomplished through unitary evolution and does not require von Neumann projection or “collapse”. Other observers, living on other branches of the wavefunction, see a different CMB pattern on the sky.