This week the Union of Concerned Scientists (UCS) released a report, “Science or Spin?” on the accuracy of reporting on climate change by the three major cable news networks. It found a lot of error. The study categorized the coverage of climate science as ‘accurate’ or ‘inaccurate’, depending on whether it was or was not consistent with the scientific consensus, as set out in the Intergovernmental Panel on Climate Change’s 2013 report or the National Research Council’s 2011 report.

Climate change is a left-friendly issue in so far as the science is favorable to the preferred values and outlook of the political left. Not surprisingly, MSNBC was the most accurate and Fox the least. However, Fox had improved since 2012, when another analysis by UCS found that only 7 percent of the segments aired on the network during a six-month period that year were accurate. 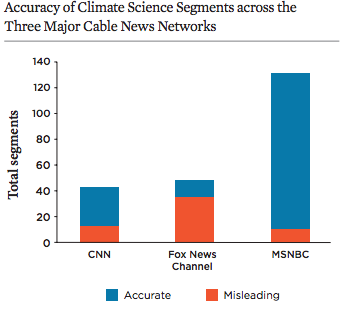 Overall, the networks’ mistakes were predictable from their ideological biases. Fox made errors of all types, but its most common mistakes involved understating the extent of the effects of climate change. 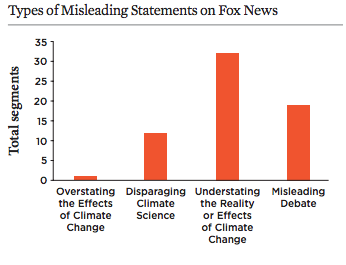 CNN tries to be balanced within the central US ideological spectrum, and it succeeded in making errors of all types at nearly equal rates. 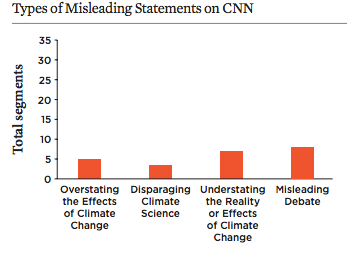 Most of CNN’s  misleading coverage stemmed from segments that featured debates between guests who accepted established climate  science and other guests who disputed it. Such debate formats represent a framing choice that suggests established  climate science is still widely debated among scientists,  which it is not. This debate structure also allows opponents of climate policy to convey inaccurate portrayals of the science  to viewers.

This is an interesting point. While a debate from opposing sides is the easiest type of analysis to generate and can limit bias (see literature on “considering the alternative”), it leads to bias when one side lacks scientific merit.

When MSNBC made an error, it always consisted of overstating the effects of climate change. 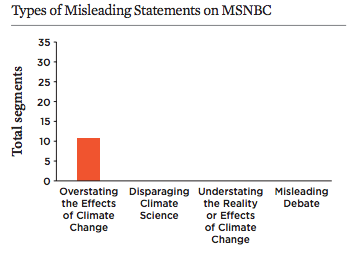 The UCS is a liberal organization. It supports arms control, renewable energy and fuel economy standards and opposes cloning animals for food and genetic engineering. However, it is not doctrinaire left. It acknowledges that nuclear energy could be a part of a green energy future if nuclear power plants could be made safer.  Still, their methodology in this report appears valid. They measure news reporting against the consensus position of climate scientists.

For those of us who are not experts, the most rational approach to forming an early opinion is to follow science when there is a consensus.