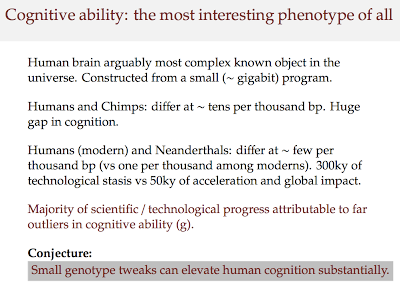 Slides for a brief introduction to my panel at the University of Chicago Conference on Genetics and Behavior later this week. See also One hundred thousand brains.

Some relevant comments, from an essay by David Deutsch:

It is uncontroversial that the human brain has capabilities that are, in some respects, far superior to those of all other known objects in the cosmos. It is the only kind of object capable of understanding that the cosmos is even there, or why there are infinitely many prime numbers, or that apples fall because of the curvature of space-time, or that obeying its own inborn instincts can be morally wrong, or that it itself exists. Nor are its unique abilities confined to such cerebral matters. The cold, physical fact is that it is the only kind of object that can propel itself into space and back without harm, or predict and prevent a meteor strike on itself, or cool objects to a billionth of a degree above absolute zero, or detect others of its kind across galactic distances.

But no brain on Earth is yet close to knowing what brains do in order to achieve any of that functionality. …

… the answer, conceived in those terms, cannot be all that difficult. For yet another consequence of understanding that the target ability is qualitatively different is that, since humans have it and apes do not, the information for how to achieve it must be encoded in the relatively tiny number of differences between the DNA of humans and that of chimpanzees. So in one respect I can agree with the AGI-is-imminent camp: it is plausible that just a single idea stands between us and the breakthrough. But it will have to be one of the best ideas ever.

We are, after all, merely machines that dream we are awake ;-)