I sense a pulse of momentum finally detectable in the information vortex regarding divestment from fossil fuels. Just in the past two weeks we have the following announcements:

Building on its recent update of the physical science of global warming,1 the IPCC’s new report should leave the world in no doubt about the scale and immediacy of the threat to human survival, health, and wellbeing…

Our University invests in the fossil fuel industry: this is for us the central issue.  We now know that fossil fuels cause climate change of unprecedented destructive potential.  We also know that many in this industry spend large sums of money to mislead the public, deny climate science, control legislation and regulation, and suppress alternative energy sources.

Whether or how soon these fledgling efforts lead to a similar success as the divestment campaign against apartheid South Africa will depend on whether the actions can move to the “third wave” of action as suggested by the Oxford University report on Stranded Assets noted above.

Divestment campaigns typically evolve over three waves, with examples drawn from the tobacco and South African experiences…Despite its relatively short history, the fossil fuel campaign can be said to entering the second wave of divestment. (pp.10-11)
Heck even retiring librarians/sustainability directors have been known to try to cajole their university’s president and provost into divesting. 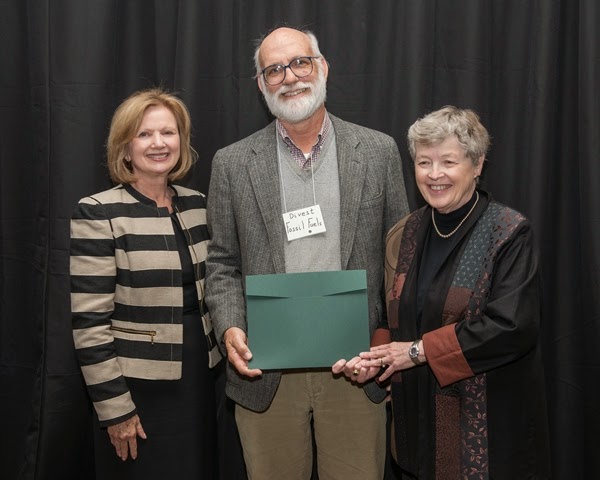 Photo taken at MSU faculty retirement  luncheon, April 8, 2014. Dr. June Youatt, Acting Provost, the Possibilitator, and MSU President Lou Anna Simon. (Their photo here is not to be construed as showing support for divestment of fossil fuels from the university’s endowment. Although my re-purposed library catalog card hanging around my neck does indeed represent my position.)

I keep hoping that our university which was one of the first to divest from apartheid South Africa in 1978, will once again take a leadership role in moving the world away from the threatening devastation from climate change.

Between January 1979 and January 1980, Michigan State sold $8.5 million of stock in thirteen companies. Far from being costly, the transactions actually made money for the university and diversified its portfolio. MSU did, however, experience a punitive decline in corporate donations in subsequent years, especially from Michigan-based Dow Chemical, Ford Motor Co. and General Motors, all of whom operated in South Africa.
There are so many positive investment opportunities that would be good for the world and those we share it with, that we should redirect those funds towards. And based upon the increasing reports about the financial risks in staying invested in fossil fuels, one would think even conservative financial planners will steer away from those risks and not be the last one’s holding stranded assets.
But thinking of this only as a FINANCIAL issue misses the more fundamental problem with our finance mindset. Harvard’s president did recently agree to become the first major university in the U.S. to sign the UN’s Principles for Responsible Investment for their endowment, the largest in the U.S.

So perhaps a close review of those principles will have them deciding to divest from fossil fuels and reinvest in triple bottom line firms soon. It’s the drive to unlimited economic growth on a finite planet that got us into this mess. Universities should be places where that madness is challenged. Anyone can be a leader and as the MSU experience with apartheid clearly demonstrates, the decision-makers will need to hear from the members of their community. Time for WAVE III.
Tweet
The following two tabs change content below.