If you don’t know what a tar lily is, you’re not alone.  I had never heard of them before now.  NOAA scientists were expecting to find a shipwreck in a part of the Gulf of Mexico they were exploring with a submersible vehicle, but came upon a strange sight – the remains of an old asphalt volcano that was in the shape of a lily, so it was dubbed a “tar lily.” It was covered with various sea creatures and found at more than 1,900 meters deep. A second tar lily was found nearby.

To explain how this was created, we first should start with some geology background.  Asphalt is synonymous with bitumen (in geologic terms at least – it is used differently than if you are talking about asphalt pavement on our roads). Asphalt is a form of petroleum that is semi-solid, and extracted from crude oil.  It forms the “oil sands” deposits in Canada. Other crude oil components, like diesel and gasoline, are separated from asphalt by vaccuum distillation. Tar, on the other hand, looks similar to asphalt but is extracted from coal.  The public often uses the word “tar” instead of asphalt, so you will hear the term “tar sands,” too, but the ones in Canada do not come from coal.
http://en.wikipedia.org/wiki/Asphalt

You might not know, especially if you are not from Southern California, that there are natural petroleum seeps where petroleum, often in the form of tar or asphalt, escapes out of rock onto the Earth’s surface.  I mentioned Southern California because it has thousands of seeps, including the world’s largest oil seep in the Santa Barbara Channel (you will see tar balls wash up on Santa Barbara beaches quite often). More of you may have heard of the La Brea Tar Pits in Los Angeles, where a natural asphalt pit trapped many prehistoric mammals, including saber-tooth tigers and mammoths.  Neanderthals and the first humans took advantage of asphalt seeps in other parts of the world to make their tools, help with building construction, and to waterproof boats and baths.  The ancient Egyptians even used it in the mummification process!
http://en.wikipedia.org/wiki/Petroleum_seep

Now, back to the “tar lilies” (which should technically be called “asphalt lilies,” but because of the colloquial use of “tar” being more common, they are called that instead).  There are rare types of volcanoes under the ocean’s surface that are asphalt volcanoes instead of your traditional lava volcano.  As you could guess, they erupt asphalt instead of lava, and they were first discovered in 2003 in the Gulf of Mexico. The asphalt is very hot when it erupts but the cold seawater quickly cools it.  Methane hydrates are also heated to gas form and erupt as well.
http://en.wikipedia.org/wiki/Asphalt_volcano 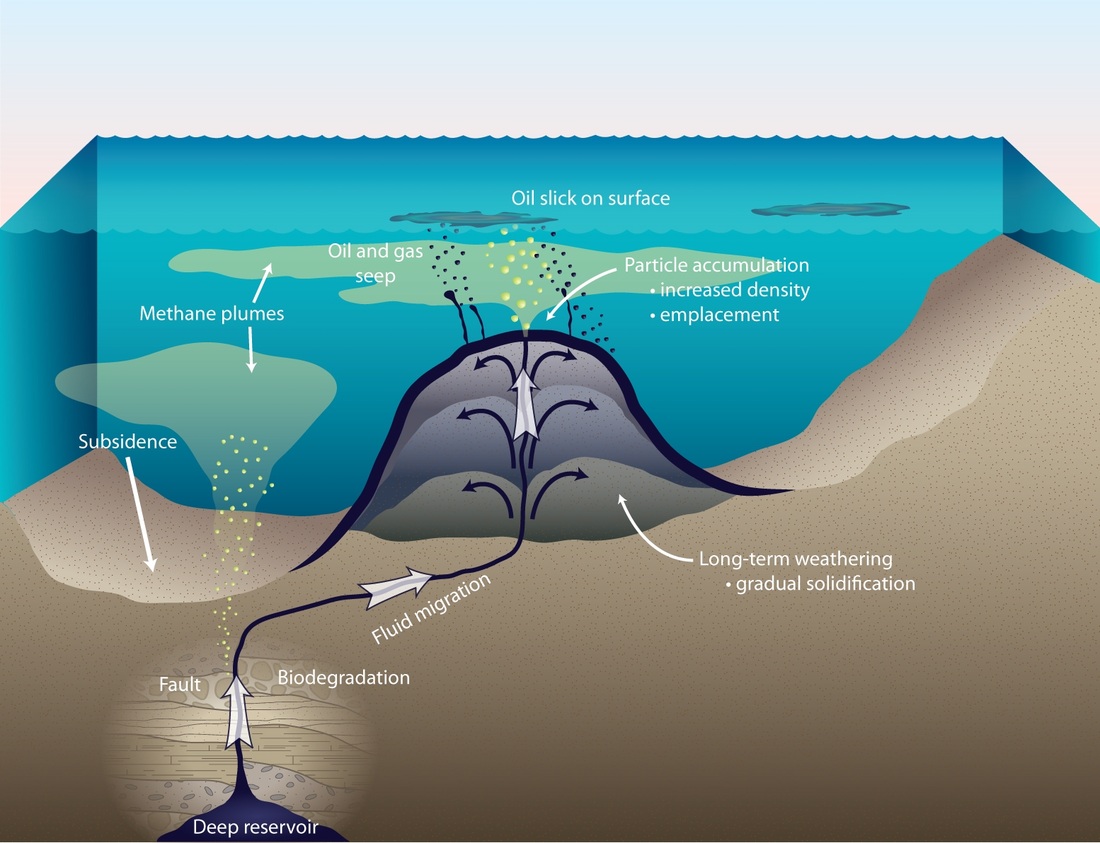 A diagram of an asphalt volcano.  Diagram courtesy of Jack Cook.

Okay.  Now that you understand a bit on asphalt volcanoes, maybe you can picture that as the thick asphalt came out of a volcano, the cold water caused it to fracture and splay out from the opening, causing it to look like lily petals.  The tar lily that scientists found is at least hundreds to thousands of years old.  It is sitting in the middle of the ocean floor surrounded by heavy sediment, and as a hard surface, the tar lily attracts sea life to colonize it, since creatures have something they can attach to or sit on, which is impossible to do in the deep sediment around it.

The NOAA Okeanos Explorer Daily Updates blog says, “The first “tar lily” was colonized by fly trap anemones, unidentified sponges, goose neck barnacles, octocorals, sea pens, squat lobsters, and bamboo corals. There were also a few chemosynthetic fauna, including tube worms, bacterial mats, and Alvinocaris shrimp. At the second “tar lily,” there were more chemosynthetic worms, a spiral coral, a few octocorals, and several branching bamboo corals. On both structures, there was evidence for the presence of hydrate from seafloor staining near the base of asphalt extrusions. However, no bubbles of either gas or oil were observed escaping from either structure.”
(scroll down to Dive 12) http://oceanexplorer.noaa.gov/okeanos/explorations/ex1402/dailyupdates/dailyupdates.html

Here is the general news article, with lots of photos:
http://www.theblaze.com/stories/2014/05/01/scientists-have-an-oh-my-gosh-moment-while-searching-for-what-they-thought-was-a-shipwreck/ 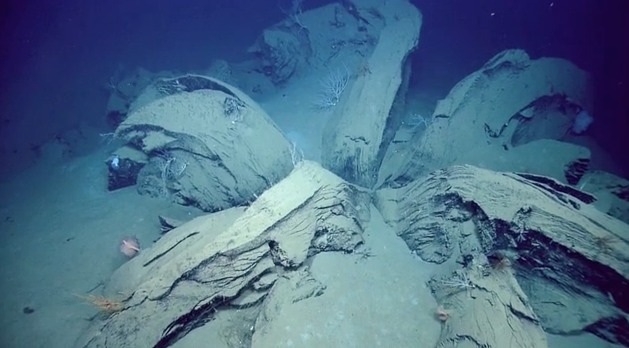 The above photo of the tar lily was posted with The Blaze article and taken from this neat video taken by the NOAA submersible that is worth watching:
http://oceanexplorer.noaa.gov/okeanos/explorations/ex1402/logs/dive12_video/dive12_video.html