Like microscope filters, ideologies hide somethings and highlights others

Now that Donald Sterling has apologized and the coverage of the his remarks has quieted down somewhat, it might be time to take a cooler look at the overall situation. While the tape reveals a little bit about one man’s views on race, the coverage gives insight into how Americans of differing ideologies conceive of the role of race in society (1).

One consistent feature of Conservatism is the belief that racial discrimination does not play an important role in American society. For example, a CBS News poll taken in Oct. of 2013 asked whether nonwhites have fewer opportunities than whites in society. Republicans were 50% less likely to think so than any other group. 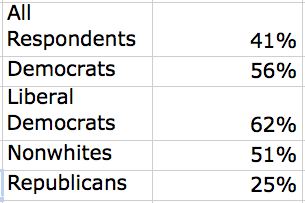 In keeping with this view, coverage in conservative media downplayed Sterling’s remarks and focused instead on the surrounding issues, which the commentators believed (a) are more important and (b) have been obscured by the light and heat generated by the words on the tape. Here are some examples.

Sterling is not uniformly racist

A cartoon from the conservative humor website comically incorrect draws attention to the fact that Sterling does not appear to be racially biased in all aspects of his life. 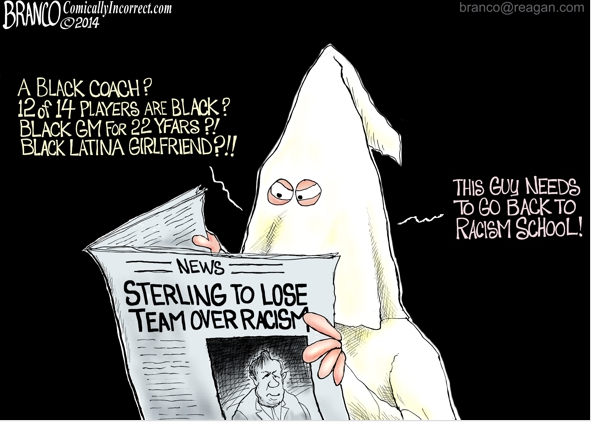 True enough. Donald Sterling is not Bull Connor. He is complex guy who may discriminate against blacks and hispanics in housing and not want his girlfriend to associate with black people, but he seems comfortable employing them in his organization.

I had listened to roughly eight hours of commentary on Donald Sterling and the ugly remarks he made in conversations secretly tape-recorded by his girlfriend, before I heard anyone mention a wife…Not only does Sterling have a wife of 50 years, but earlier this year, she sued his girlfriend, demanding the return of two Bentleys, a Ferrari, a Range Rover and a $1.8 million apartment, claiming it was bought with community property without the wife’s consent….The fact that this 80-year-old human-manatee, married with three children, has been openly consorting with prostitutes for decades does not account for 1 percent of the media’s outrage against Sterling.

Reasonable. Aside from Magic Johnson, she may be the person most directly affected by the situation.

Fox News quotes Todd Boyd, professor of Critical Studies at USC, who notes how black commentators may have opportunistically used Sterling’s comments to validate their own identity.

There also are a lot of African-Americans in society who, it’s almost as though they’re waiting for moments like this to prove their blackness…It gives them an opportunity to say, I’m protesting, I’m boycotting. Get this racist out. It sort of gives their life meaning.

Presumably Boyd means people like Al Sharpton. However, because he doesn’t mention anyone by name, the accuracy of this comment is hard to assess.

A commentary by Larry Ellis on Rightwingnews touches on some of the same themes as the cartoon and points out the hypocrisy of a broader media that vilifies Sterling but gives Spike Lee a pass when he expresses hostility toward interracial couples.

This “racist” hired an expensive, championship-winning black coach, who happens to be married to a white woman. He pays his black starting point guard $18 million annually. His payroll is the sixth most expensive out of 30 teams. Oh, and the “racist’s” girlfriend is a black Latina.

Good point. Spike did say these things. (See this interview in Esquire). It is remarkable that people do seem willing overlook such comments when they come from Lee.

These comments may sidestep the central event in the controversy, but they do fill in elements left out of the coverage by the rest of the media.

Finally, in this video clip from Fox News the Basketball player Meta World Peace (a truly great name) calls for dialogue with Sterling rather than sanctions.

All told, these comments probably give us some insight into what conservative Americans believe about racially charged events, which would appear to be that they’re not as important as they are cranked up to be.

(1) Matt Gentzkow recently won the John Bates Clark young economist (under 40) award. His most well-known result (“What Drives Media Slant? Evidence from U.S. Daily Newspapers“) shows that the ideology of newspapers correlates more highly with the political outlook of their audience (r^2=.2) than with the ideology of the newspapers’ owners (r^2=.04). One cannot be sure that readers will agree with every article a newspaper publishes (the comment sections give a biased sampling of the responses), but what a venue publishes does carry some information about the political attitudes of its readers.