Like microscope filters, ideologies hide somethings and highlights others

In the first post on this subject we examined the right side of this diagram, the Right wing coverage that focused on the issues surrounding Sterling’s racist remarks, deemphasizing the remarks themselves.  Now we look at Left, which focuses squarely on those remarks.

Two dimensions on which the Right and the Left differ in the US these days are their views of the role of race and wealth in society. By and large, the Left sees racial bias as (still) a significant factor in American life, while the Right believes that it is not, except in so far as government mandated affirmative action programs impose discrimination. The Left believes that extreme wealth is corrosive and often gained through malfeasance, while the Right sees it as generally a sign of good, honest, hard work. 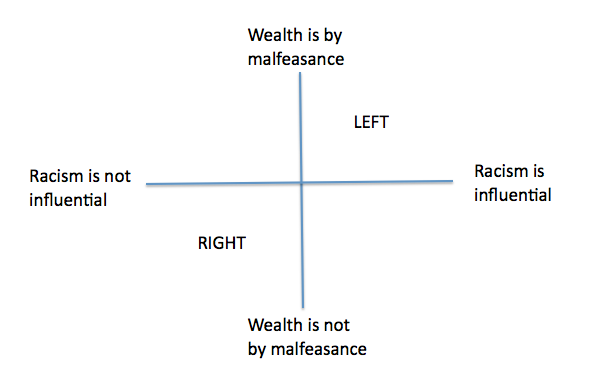 Given this sorting, it is not surprising that the Left’s coverage of Sterling affair has focused on Sterling’s comments and the failings of the sports power structure, or racism and wealth in other words.

An article on the Nation‘s blog,  “Donald Sterling, Awful Sports Owners and the ‘Slippery Slope’“, captures both themes

Behind every great fortune is a great crime and, with the exception of the 364,122 owners of the Green Bay Packers, there’s no owner in pro sports who does not have some blood under their buffed fingernails. This is a club of billionaires, and that kind of money doesn’t come from scratching Lotto tickets.

Let’s also state the obvious and say that Donald Sterling is hardly the sole racist who calls the owner’s box his home. If you think he is, I have some Lady Gaga tickets at the Verizon Center to sell you. One person who works amongst the owners in major North American sport e-mailed me just to say, “I can tell you off the record about at least three of these guys who talk in a way straight from the Donald Sterling handbook.”

Proceeding then to list “crimes” of other owners (all unverified by me): chemical dumping by Jacksonville Jaguars owner Shahid Khan and child labor in Bangladesh by David Glass owner of the Kansas City Royals, when he was CEO of Wal-Mart — when news reports of the story broke, he is alleged to have said that he and his critics “define childhood differently”. The article also says that Dick DeVos, owner of the Orlando Magic, has supported right wing organizations backing gay conversion therapy.

Daily Kos (“I hate the Sterling Story“) takes a birds eye view of the story, lamenting how it allows people the author considers near racists to cover up their crypto-racism by attacking an obvious racist

But the Sterling story gives quasi-bigots and quasi-racists (i.e., supporters of racist or dog-whistle policies) the chance to pontificate sanctimoniously and mock Sterling’s obvious racism.  Sometimes before leaving for work, I turn on Morning Joe — just to see how long I can last before disgust sets in.

Today, I lasted one minute after watching Scar’s crew delightedly going after Sterling.  Everyone was having a great time bashing Sterling.  “See,” they almost shouted, “We’re not racists.  This guy Sterling is a real racist.“

The author goes onto cite Scarborough’s support of voter ID laws and feigned lack of understanding of why such laws would concern anyone as evidence of his racism. To me, it is not clear that voter ID laws are highly correlated with racism. Surely, some who support them are racists, but others could just be bare knuckle political fighters, willing to adopt any laws that will depress poor and minority voting rates. Beyond this, given how little evidence there is of the voter fraud the laws are meant to counteract, it is hard to imagine that many legitimately believe they are needed to prevent fraud, but you never know.

Sterling has a long and notorious history of racist utterings, which the NBA shamefully ignored up to now. But his most recent spewings coalesce in time and space around the ramblings of Cliven Bundy. Both epitomize a basic plantation mentality — not slavery as an accepted institution, but an accepted narrative of white superiority and black inferiority — that is far more dangerous and pervasive than we Americans care to admit.

Sterling’s comment [in response to Stiviano’s point that the players making him money] “I give them food” shows a total lack of respect, or even understanding, that the players on the Clippers team made Sterling a rich man — not the other way around.

While we may have legally ended slavery and sacked Jim Crow, the power of privilege, coupled with our still largely self-segregation, feeds into a racially stratified system that is morally bankrupt.

Very few white Americans embrace blacks on an emotional level. There is still a pervasive belief that whites are smarter and work harder than blacks.

The deeper story, however, is the public recognition, finally, that rank racism still festers in America.

If plantation thinking were truly dead, the NBA would have dealt with Donald Sterling years ago.

The Left is in a difficult position. Whereas the Right could say something relatively new by drawing attention to simple issues surrounding Sterling’s comments that were overlooked in the mainstream coverage, the Left is focused on the core issue of the comments. To say something new its writers must find uncovered core facts or make new generalizations about the central facts.

Outside of the the evolution-creationism debate and, to a slightly lesser extent, because the science is not quite as settled, the climate change debate, most ideological divides turn on issues that are difficult to resolve empirically. We don’t know how often great wealth results from dishonest activity or how many owners in the NBA share Sterling’s views. So the Left and the Right can go their separate ways over these issues. What they share, however, is the tendency to adopt strong positions in the absence of strong evidence.