A new paper “Tightness-looseness Across the 50 United States” by Harrington and Gefland in PNAS offers an analysis that sheds some light on the differences between conservatism and liberalism. The authors argue that there is significant variation among US states along what is known as the “tightness-looseness” index. The concept was originally applied to traditional and modern societies. Tight societies are more religious, have more authoritarian governments, greater media restrictions and fewer civil liberties than loose societies. Citizens of tight societies reflect these tendencies. They exhibit more cautiousness, conscientiousness, and impulse control and are more concerned with safety than citizens of loose societies. In extending the concept to US states the authors show that a variety of ecological factors such as higher incidents of natural disasters and social outcomes such as lower levels of happiness and creativity correlate with tightness. In summary they write:

We see that tightness-looseness can account for the divergence between substance abuse and discrimination rates between states such as Hawaii and Ohio, reliably predicts the psychological differences between conscientiousness and openness between Colorado and Alabama, helps explain the contrasts in creativity and social organization between Vermont and North Dakota, and provides some understanding of the dissimilarity and insularity and resistance toward immigration between Arizona and New York…

By showing how states vary in tightness and looseness, this research can help to understand what many have termed the “culture wars” between states of the last few decades.

The full ranking and map appear below

Ranking of US states by Tightness 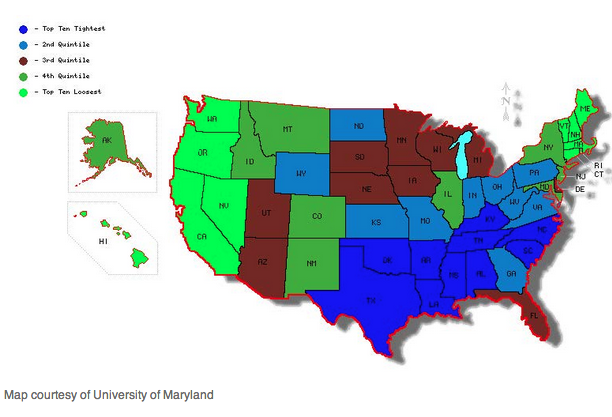 Map of US States by Tightness-Looseness Quintile

Iran is a society where the government is tight, but a significant part of the urban population is relatively loose. There is an on-going culture war between liberals and conservatives into which the makers of a tribute video to Pharrell Williams’ “Happy” stepped when they posted on youtube.

The arrests caused the video to go viral. As LA times emphasized its makers did not try to hide their identities:

We have made this video as Pharell William’s [sic] fans in 8hrs, with iPhone 5s

The video makers stated in English at the end of an almost five-minute clip posted on YouTube.

“Happy”  was an excuse to be happy. We enjoyed every second of making it. Hope it puts a smile on your face.

The credits at the end of the clip contain the full names of individuals identified as the art director and costume designer, along with the first names of other participants.

Last year, President Hassan Rouhani stated publicly that “happiness is our people’s right,” a comment that was widely reported at the time.

The ensuing publicity engendered an international outcry and demands for the release of the dancers and production team, thus showing what can happen when leaders of a tight government misjudge the degree to which many of their citizens, and those outside, would like their society to be looser.  The government complied.