I am fairly sympathetic to “no free lunch” theories. Many improvements have a cost. As I discussed in a previous post, the fact that many technically and scientifically gifted people are on the autism spectrum is one example. It may be that most human brains have a limited ability for different kinds of processing, and improvements in one area come with decrements in others.

A paper published this week in PLOS Biology by Katarzyna Bozek and collegues, “Exceptional Evolutionary Divergence of Human Muscle and Brain Metabolomes Parallels Human Cognitive and Physical Uniqueness“, suggests that there may have been a trade off between the evolution of our prefrontal cortex and our muscle strength. The group found accelerated evolution in molecules associated with metabolism in the prefrontal region of the brain and in skeletal muscles in humans after we split from chimpanzees. This change in metabolite composition was greater in these regions of the body than in others and happened faster than in the earlier speciation events between mice, macaques, the chimp-human common ancestor.

The key figure from the paper appears below. 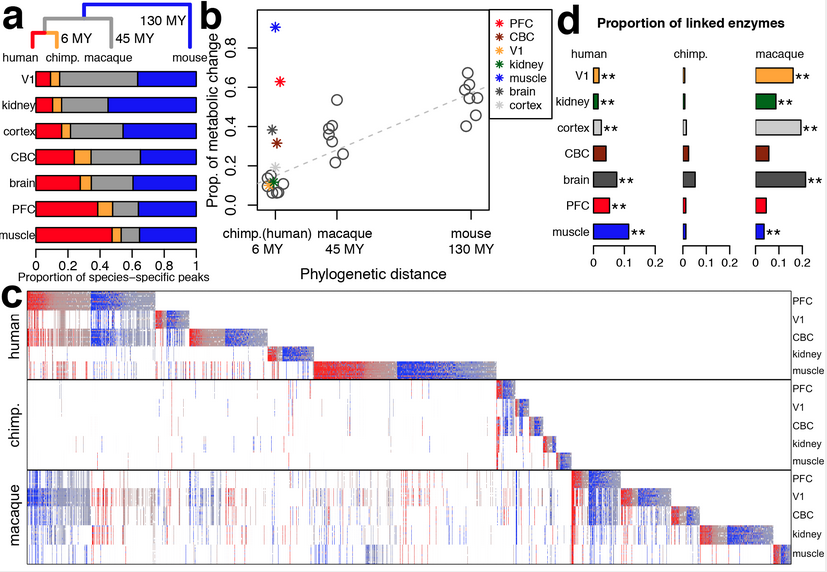 In (A) you can see there are a relatively large number of changes specific to humans (red) even though humans split from chimps relatively recently. In (C), where the amount of change is represented horizontally with different organs on the vertical axis, change is greater in the pre-frontal cortex (PFC) and muscles than in other human body parts.

Questions naturally arise. Why did these changes occur at the same time and what do they mean? According to the Zero Sum theory, the changes in brain and muscle metabolism are linked because the increase in metabolic activity in the PFC required a reduction in energy use by muscle. The human brain makes up only 2% of human body weight, but uses over 20% of the energy produced in the body, a significantly higher proportion than the chimp brain. So as brains got larger and more active, muscles got weaker.  A chimp is about two times as strong as a human of the same weight (“The Strength of Great Apes and the Speed of Humans“). Another hypothesis is that the muscles changed to allow humans to walk long distances, which facilitated hunting and greater energy consumption.

Another question is ideologically loaded.  What does this result say about people alive today? Few publications have gone there, but the decidedly unpolitically correct Economist begins its coverage of the paper as follows:

THAT swots are weedy and jocks are stupid is a high-school cliché. But a paper just published in PLOS Biology by researchers at the Chinese Academy of Sciences and the Max Planck Institutes in Germany suggests there may be an evolutionary grain of truth in it.

The paper offers no evidence to support this conclusion, so the Economists ends its coverage speculatively:

So, although Dr Bozek and her colleagues did not actually compare individual people, when geeks refer to jocks in disparagingly simian terms they may have hit on an underlying reality.

The willingness to talk about issues that may be insulting to “vulnerable” groups of people is a feature that distinguishes conservative from liberal publications.  My survey has not been exhaustive but I’ve found no liberal publications that raise this question in connection with the article.