(Best to watch the first one first for some background information about fitness landscapes.) 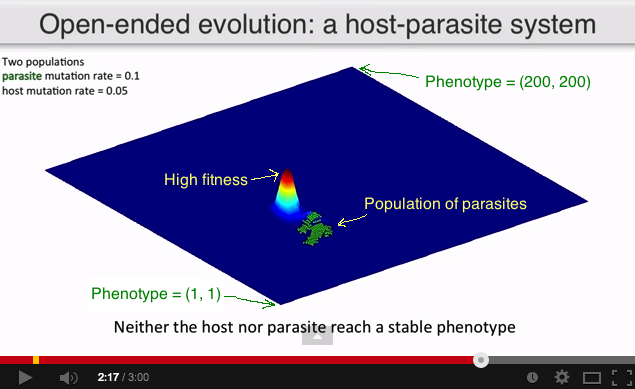 These movies are based on simulations of organisms evolving by reproduction, mutation and selection. Populations move around on a map that depict fitness as a function of phenotype (i.e., the biological and physical characteristics of an individual organism).

The following is a semi-technical description of the simulations, so be warned. If you have questions about some details, let me know in the comments.

Sympatry. All simulations shown in the videos have no spatial component. The moving around in the landscape is only caused by changes in the phenotype, not geographically, and the population is therefore said to be strictly sympatric or well-mixed. If the individual organisms did move around in physical space, then where they are located relative to each other could have an influence of who they interact with, which could change things further. Structured populations are known to affect evolutionary dynamics through social interaction, competition for resources, and mating.

Mutations in these simulations work like this: Each of the two traits mutate at a set mutation rate. Every time an organisms reproduces, the new organism has a chance to mutate which is equal to the mutation rate. This is true for each trait, so that a mutation rate of 0.05 means that trait 1 has a 5% chance of changing, and trait 2 also has a chance of changing. These two events are independent of each other. When a trait mutates, the trait value is either increased or decreased by one. In other words, if the trait value of the parent was 142, the offspring will have a value of 141 or 143 with equal probability. There is no underlying genetics in these models, and the phenotype is directly inherited.

Selection.  Organisms reproduce asexually. Every offspring is a clone of the parent, except for any mutations. Every computational update some organisms die and some reproduce. Death is completely random, so that every organism has an equal chance or being removed every update. Who gets to reproduce is also random, but fitness affects this chance. For example, an organism that has twice the fitness of another organisms has a probability of reproducing that is twice as high. This doesn’t guarantee that it will have twice as many offspring – but on average it will be approximately so.