Today a panel of experts approved the use of Mitochondrial Replacement Therapies (MRTs) in the UK as treatments to prevent the transmission of mitochondrial diseases (MDs) and to increase the fertility of older women in the UK. According to the Daily Mail the panel described MRTs as

potentially useful for a specific and defined group of patients: those wishing to have their own genetically related child, but whose offspring are at risk of severe or lethal genetic disease, due to mutations in mtDNA which the mother carries.

Then went on to add that

At each review, the panel has reached a view that the evidence it has seen does not suggest that these techniques are unsafe. That remains the panel’s current view.

The techniques are currently under evaluation in the US. Last month the Cellular, Tissue, and Gene Therapies Advisory Committee of the FDA closed the open comment period on its consideration of the safety of MRTs. While the British public has been broadly supportive of approval, the techniques have sparked opposition from anti-abortion and progressive groups in the US.

Mitochondria, the cellular organelles that convert food into energy, are key to the functioning of every cell type except red blood cells. When they do not work properly, they can have terrible effects on the body, ranging from dementia to liver disease. 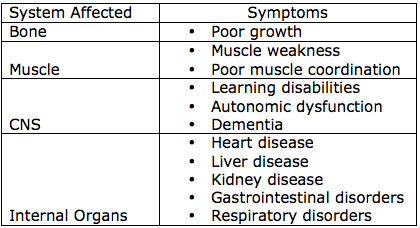 Mitochondria have their own genomes, and approximately 15% of the time mitochondrial diseases (MDs), which are currently incurable, result from mutations in mtDNA. Because mitochondria are passed from mother to child, MRTs seek to prevent the transmission of genetically based MDs by using eggs from female donors that contain healthy mitochondria. When fertilized, these eggs give rise to embryos containing genetic material from 3 parents. 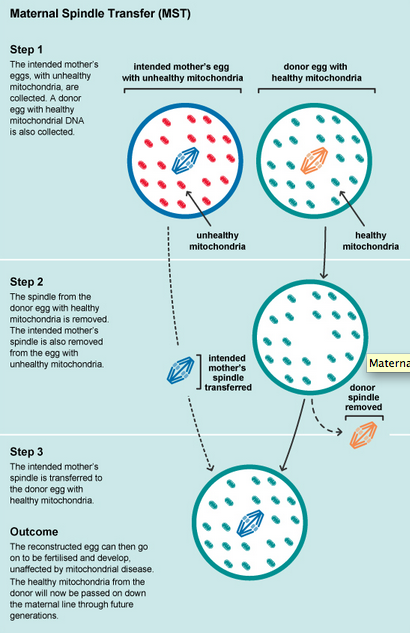 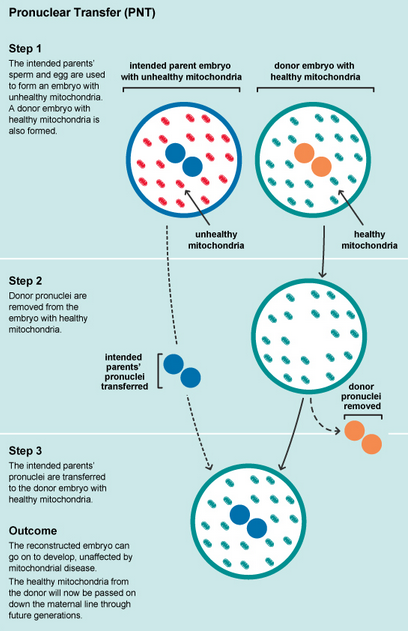 These techniques have attracted the attention of progressives because, in their early stages of adoption, they are experimental methods and stand on the edge of genetic engineering.  A few months ago Marcy Darnovsky, executive director for the Center for Genetics and Society, a progressive organization, wrote an Op-Ed in the New York Times expressing her concerns:

We should carefully and thoughtfully apply the tools of human genetic engineering to treat medical conditions in people, but we should not use them to manipulate the genetic traits of future children. Genetic modifications of sperm, eggs and early embryos should be strictly off limits. Otherwise, we risk venturing into human experimentation and high-tech eugenics…

Developers of these modification techniques say they are a way for women with mitochondrial disease to give birth to healthy children to whom they are related genetically. Some are also promoting their use for age-related infertility. These are worthy goals. But these procedures are deeply problematic in terms of their medical risks and societal implications. Will the child be born healthy, or will the cellular disruptions created by this eggs-as-Lego-pieces approach lead to problems later on? What about subsequent generations? And how far will we go in our efforts to engineer humans?

1. The techniques do not actually help sick people get better but rather allow couples, who might not otherwise be able to do so, conceive healthy children. Dr. Darnovsky believes the risk-reward calculations should be more conservative with such elective procedures.   If the treatment were helping a sick person, one might be willing to tolerate a higher probability of adverse side effects, so long as the expected outcomes are better than for the original condition. However, the alternative to MRTs for a couple wanting a child is not greater illness for the child, but adoption–not a terrible outcome. So MRTs should be approved only if the odds are small that a child born using the techniques will be sick.  But, contrary to the British panel, she maintains that we know so little about the risks to the child that the methods are pure human “experimentation”. So the procedures should not be approved.

2. The use of MRTs lies on a slippery slope that might lead to more extensive genetic manipulation like the creation of children with selective hair or eye color, athletic abilities or eventually intelligence. This is high tech eugenics, which we should not countenance.

The argument in (1) could have been given against standard in vitro fertilization when it was first used in 1978 or surrogate pregnancy or any other new reproductive technology. In the absence of data, it may be a strong argument in an abstractly rational world. The problem is that there is substantial supportive animal data and preliminary human data and the world is not abstractly rational: humans have a (genetically endowed) drive to reproduce. In telling parents they should forgo the risk of new reproductive technologies and just adopt, the argument is swimming upstream against a deeply felt natural desire.

Argument (2), that MRT is a step toward genetic engineering, is really progressives’ main argument against the techniques. Mitochondrial DNA do contain 37 genes and exchanging them is thus a simple form of genetic engineering.  However, the step down this road is a small one. MRTs do not alter or improve mitochondrial fuction and the genes that mitochondria contain do not affect traits that anyone has thought of selecting for yet. A couple could conceivably seek out donor mothers with particularly efficient mitochondria if they wished to give their child an advantage, but couples already do this for a whole host of heritable characteristics just by using sperm or full egg donors.

I have to say that the related claim that MRT could lead to “high tech eugenics” sounds hollow coming from the pro-choice side. Most people who support reproductive choice believe women should have the right to abort fetuses with severe birth defects. Such abortions constitute a personalized form of eugenics.

For anti-abortion groups the issue is the destruction of embryos (see this editorial in the Catholic Medical Quarterly.)  Thus, the argument only applies to PNT, as no embryo is destroyed in MST. However, in PNT no embryo is fully destroyed, rather two embryos are merged into one. Indeed, it might be possible just to swap the nuclear genetic material between the two embryos and only implant the one with healthy mitochondria, freezing the other. In such a case, no embryos would be destroyed, and PNT would be no more destructive of embryos than regular old IVF. It would, of course, raise thorny questions about personal identity for anyone who regarded a fertilized cell as a person.

I doubt pro-life opposition will become a significant issue. First, their argument is only likely to move people who have a religious commitment to the view that fertilized embryos have a right to life. (See Mississippi abortion amendment post). Most people have a continuous view of the increasing value of human life and do not regard a single cell fertilized embryo as worthy of preservation.

Second, the prevalence of MDs in the US is low. Roughly 1 in 4000 people will develop a form of the disease by age 10, and many of these people will die before they reach reproductive age. Thus, the number of couples making use of MRTs is likely to be small. I expect pro-lifers will continue to focus most of their attention on abortion.

On the whole, I don’t have a strong position on MRT. I expect opposition to it will fade as its use becomes more common. Of course, attitudes could change, if it is found to have drawbacks that are difficult to correct.