Yesterday I was very excited to see my first monarch caterpillars of the year on Michigan State University’s campus, in the 4-H Children’s Garden.  The first monarch butterflies were only sighted in Michigan in mid-May, but the vast majority were sighted the past two weeks, as seen on the Journey North maps created by reports from citizen scientists.  However, there have only been 7 reports submitted of monarch eggs seen, and only 3 reports of larvae (caterpillars), and one of those was the one I submitted yesterday!  I have been tracking the monarch migration from Mexico about once a week or two this spring on the website, and checking the milkweed I have growing in my native plant garden in my front yard.  My plants haven’t had any eggs or caterpillars yet, though, so I wasn’t really expecting to see third instar caterpillars at the Children’s Garden (those have gone through two moltings after hatching from an egg and would have been on the plant for over a week, due to their development time).  I haven’t seen any adult monarchs for sure yet this season (though I tried to follow a flash of orange over my fence), but I’m glad to read reports that there have been a lot of butterfly and egg sightings in the Upper Midwest so far, because this means that the overwintering migrants from Mexico successfully mated and laid eggs in Texas and the South, and those offspring survived in large enough numbers that we are seeing them in much higher numbers than we did last summer, when I never saw an egg or caterpillar the entire summer!

Check out the monarch butterfly, egg and larvae maps here, at the Journey North website. They also have all sorts of other cool maps for migrating animals, including hummingbirds and robins, and the timing of plants flowering.
http://www.learner.org/jnorth/

If you want to observe the monarch life cycle yourself, plant some native milkweed in your garden, or stop by a local park, garden or roadside that has some.  Look on the bottom of leaves for eggs, and also look for little holes (or big holes if the caterpillars are large).  You can even report your sightings to Journey North, too, if you are in the Upper Midwest, Northeast, or Canada, where they want reports of the first sightings of the season.

All the following photos were taken by me in 2012. 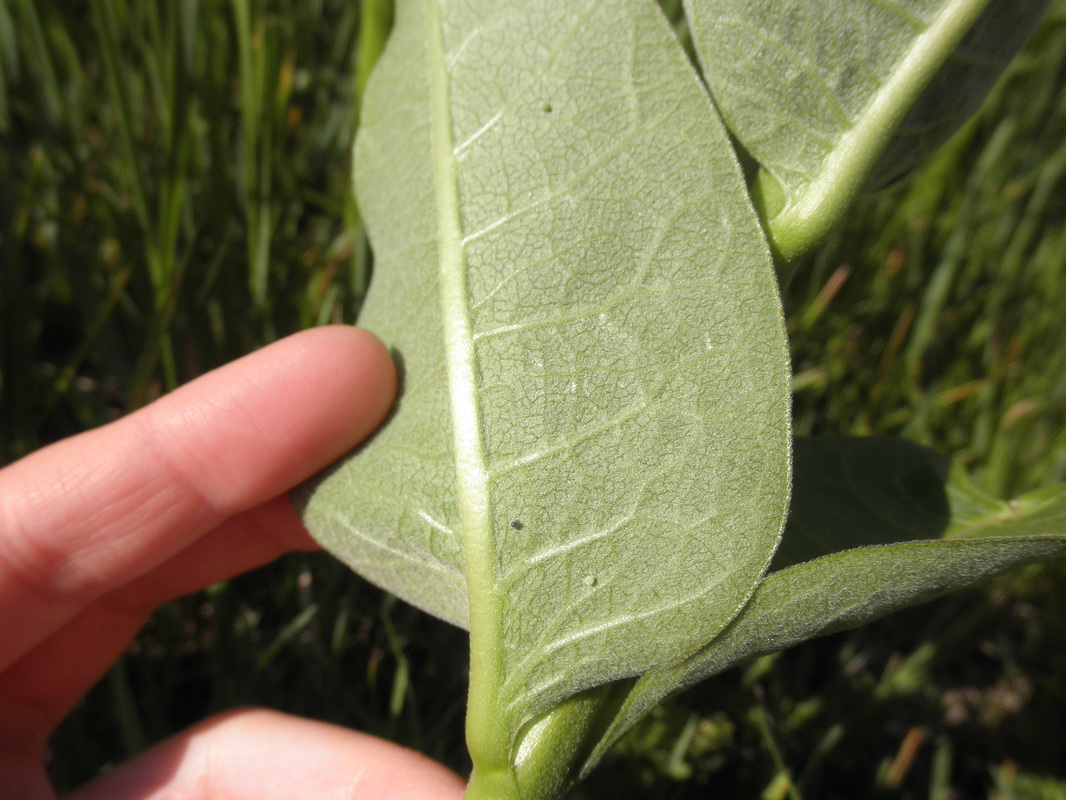 Here is a picture of what monarch eggs look like on the bottom of common milkweed. The white one on the bottom is newer, while the black-tipped one above it is almost ready to hatch. 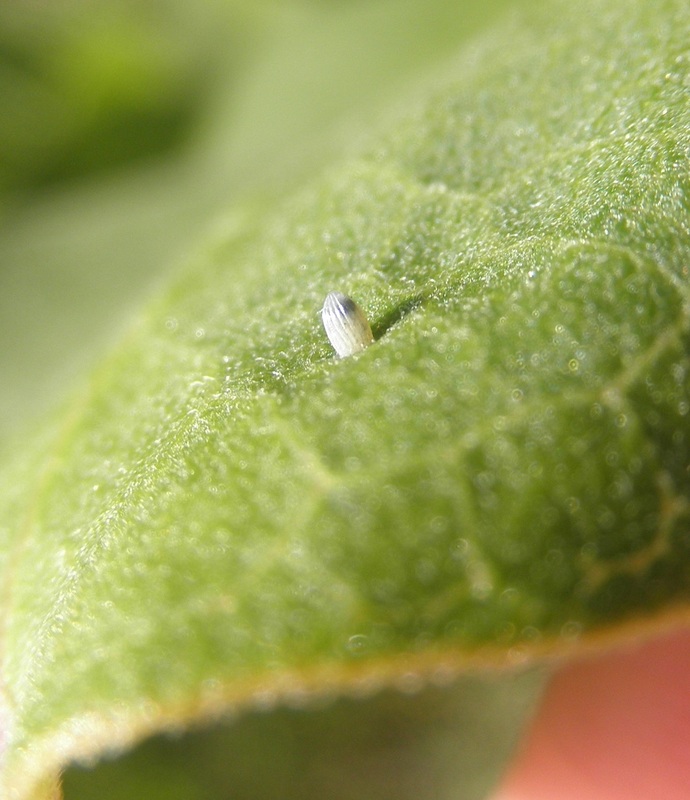 A close-up of the egg.  It is a bit pointed at the tip, and has distinct vertical ridges.  They are laid individually so you won’t see them in tight clumps like other insect eggs. 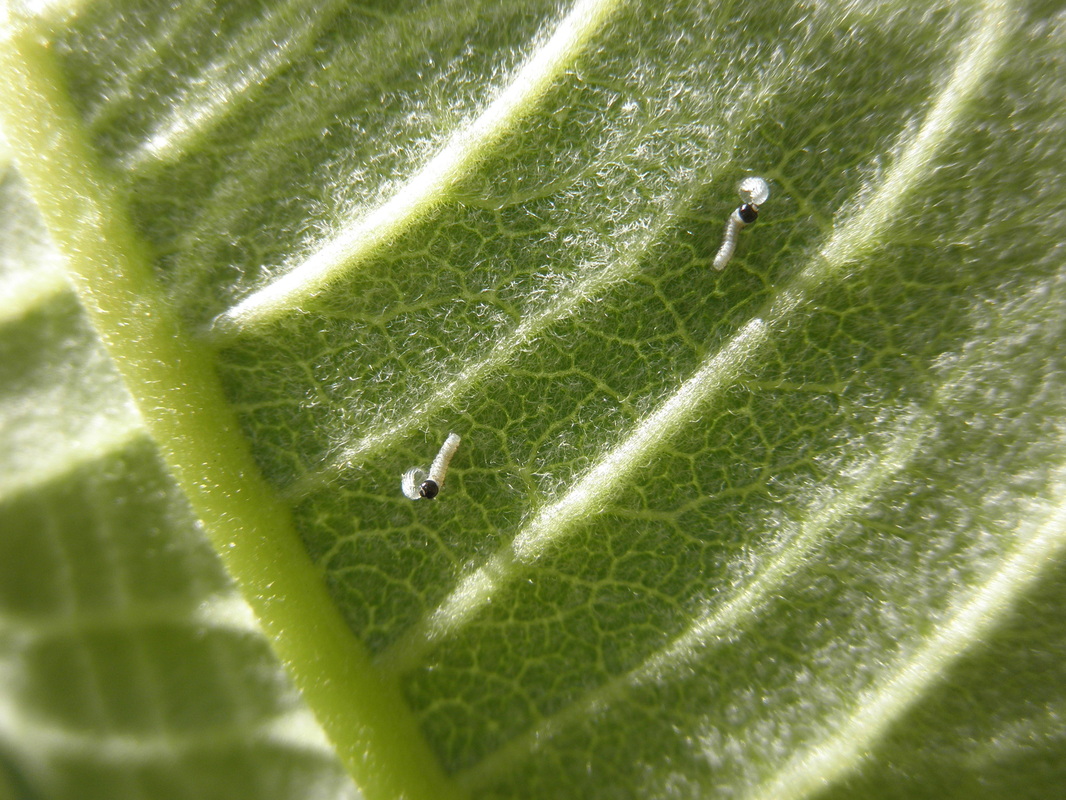 Two first-instar caterpillars that just hatched.  They eat their eggshells.  Notice their dark black head at this stage. 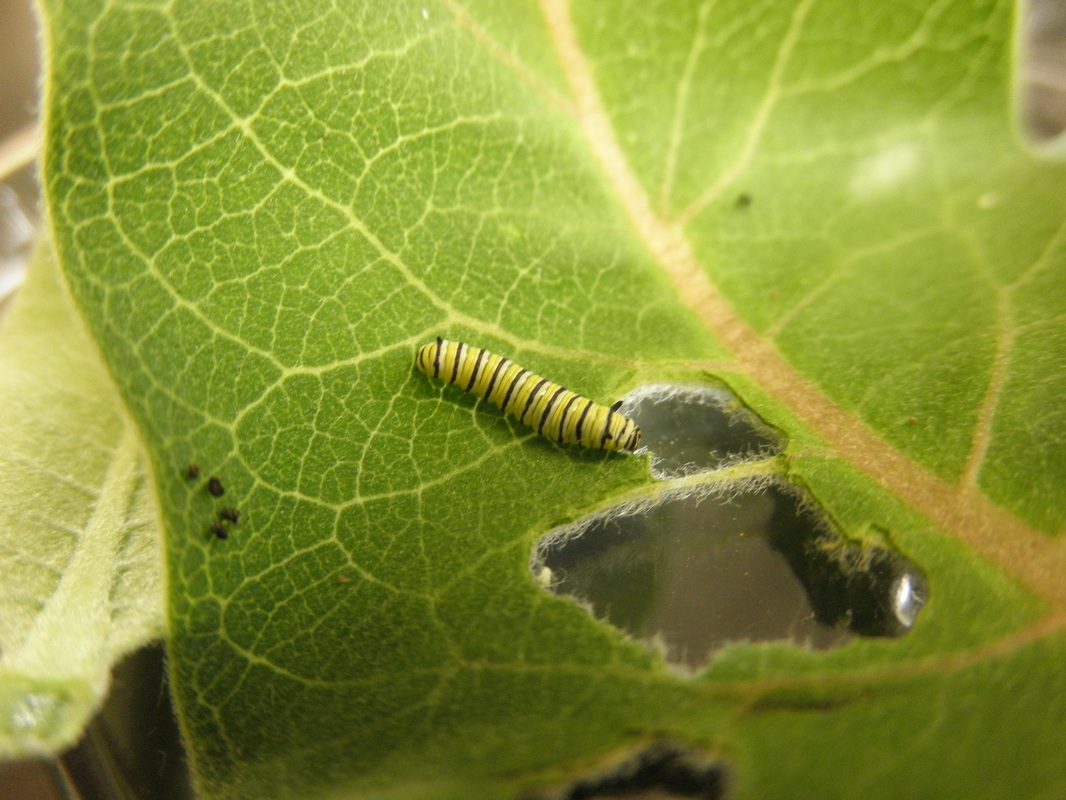 A second-instar caterpillar.  Note that it no longer has a black head, and it has small tentacles on its head but they are short and stubby. 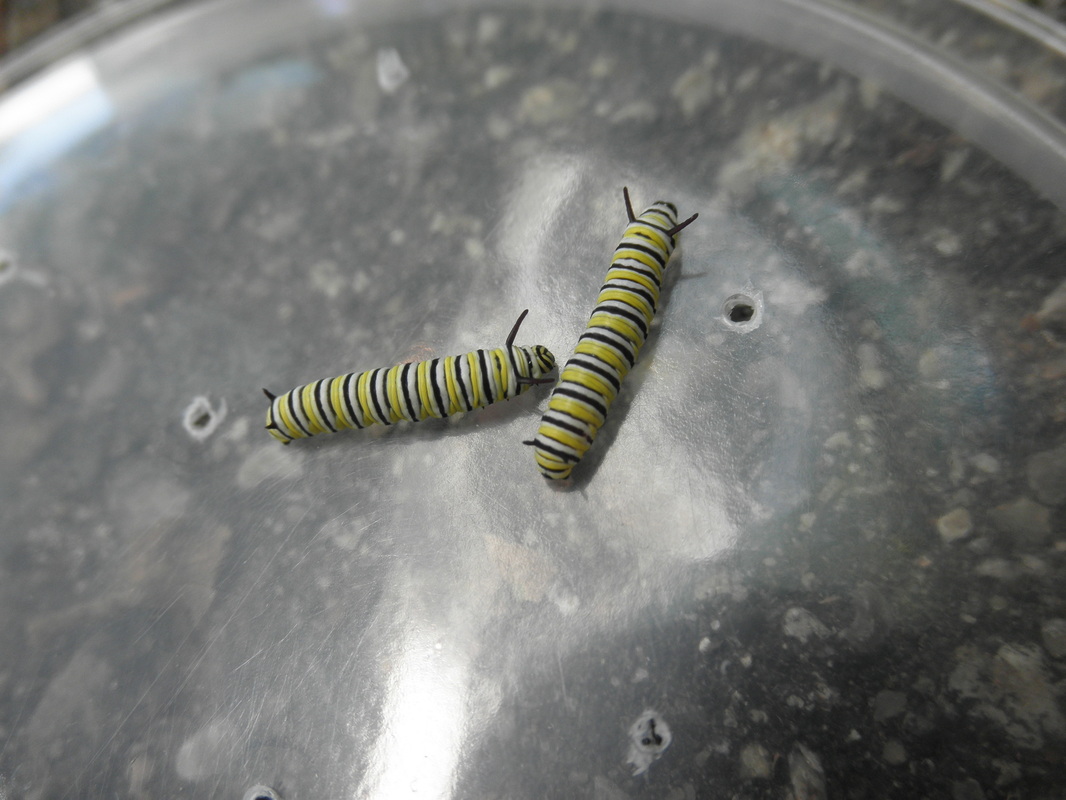 Two third-instar caterpillars.  Now their tentacles are as long as their heads. 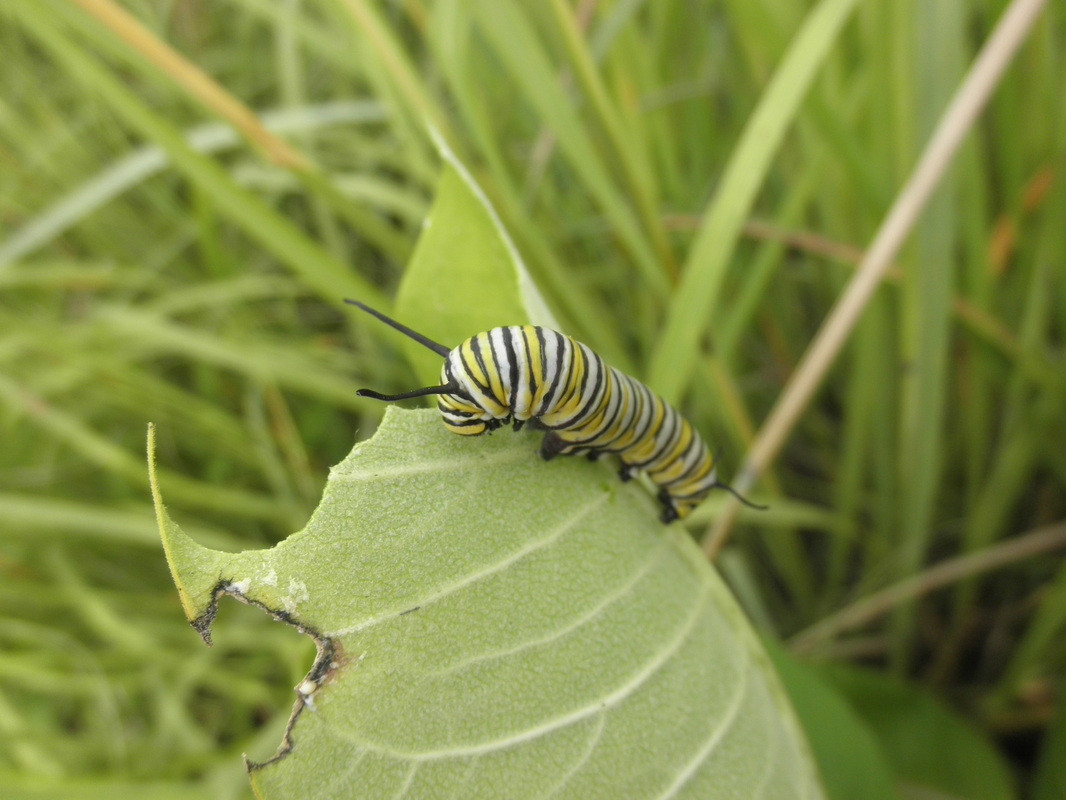 A fourth-instar caterpillar.  Its tentacles are about twice the length of its head. 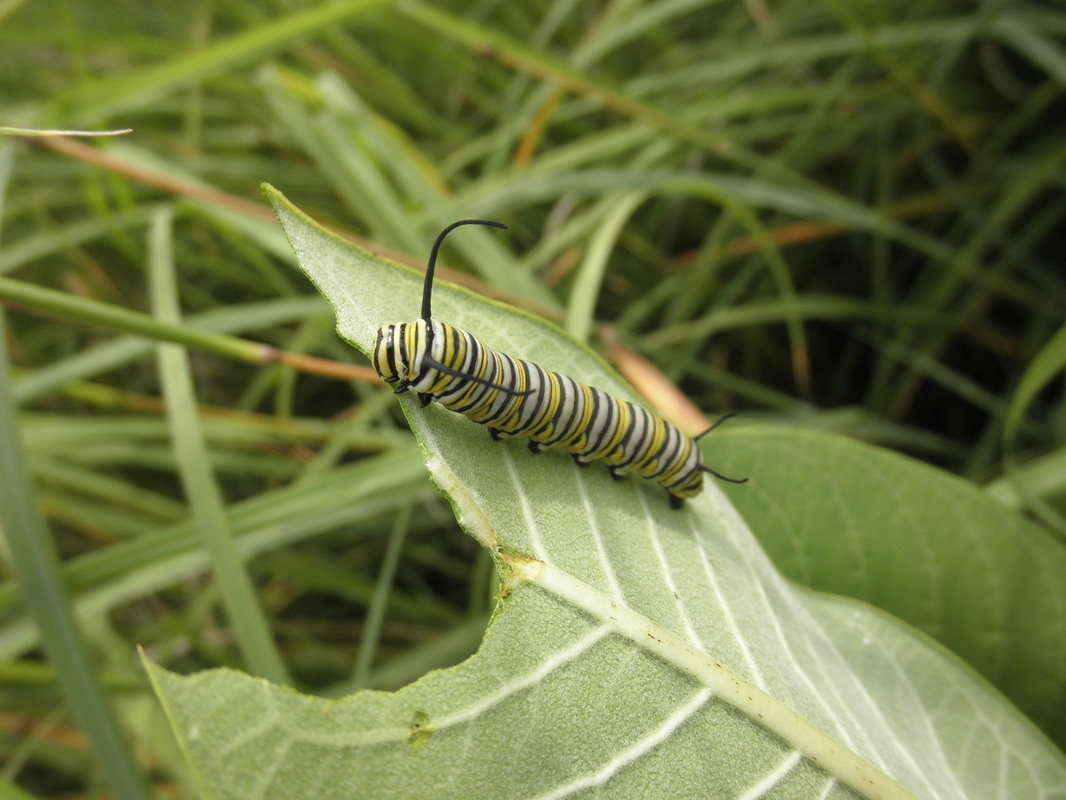 A fifth-instar caterpillar.  Its tentacles are now much longer than its head (they even curl at the ends), and notice how much of the leaf it is eating!

If you missed it, here is an earlier blog post about the plight of the monarchs.  I am happy to say that this looks like a promising start to this year’s monarch populations.