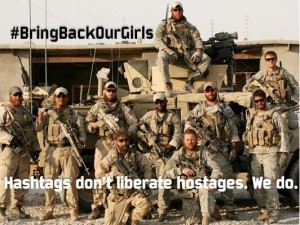 In a good oveview of the campaign to #BringBackOurGirls in the May 12 National Review Online, Michael Shank writes on “The Harm in Hashtags: Feel-good tweets do not address the root causes of Boko Haram’s violence.“Shank notes that much of the U.S. concern, like the campaign to Stop Joseph Kony and the Lord’s Resistance Army (LRA), supports an unproductive and enlarged role for the U.S. military in Africa as a number of hashtaggers urged. (See photo.)

American policymakers are increasingly prone to handling conflicts by ignoring or eliminating the adversary and trusting that this will solve the problem. By killing Osama bin Laden, Kony, or Abubakar Shekau (Boko Haram’s current leader), the U.S. deals a blow to the momentum of Islamist movements but pays no heed to the fact that another 20 followers are ready replacements. This is the thinking that guides America’s increasing reliance on drone warfare and special-operations units — the belief that our enemies are finite in number and that we can exterminate them through strategic, surgical strikes. Meanwhile, the wider conflict rages on, reaching into more and more regions.

No amount of hashtagging, no matter how well-intentioned, will “bring back our girls.” And unintentionally, the tweets and selfies can send the message to impressionable populations that Western elites are once again using elitist mechanisms to gain control. If America truly wants to rescue Nigeria’s innocent children, it must rescue their future. For many, there is no future, and this has swelled the ranks of Boko Haram. Build the possibility of a future and violent revolution becomes a lot less appealing. Nigerians will have something to live for, not die for. Let’s start hashtagging that. But in the meantime, let’s bring our kids home, be they in North America or northeast Nigeria.”

So, constructively and beyond hashtags, what should be done to effectively and intelligently address the Nigerian crisis, and what should U.S. resources and foreign policy seek to achieve? A new and important set of answers was offered on June 4 in “Putting Communities at the Center of Crisis Response in Nigeria” – a joint statement by Friends Committee on National Legislation, Mercy Corps, , and Search for Common Ground.  With many specifics, they call:

…for the United States government to work with the Nigerian government, civil society, and other actors to mitigate and respond to conflict by providing rapid and robust assistance to violence-affected communities. In particular, the following is needed: