Alright, how can it be a rock if it is made of plastic?  It turns out that beach bonfires in Hawaii (or potentially lava flows) are hot enough to melt plastic, so when plastic debris washes up or is left as litter on a beach and is exposed to that heat, it melts onto sand and rocks and shells around it, and forms a new substance scientists are dubbing “plastiglomerate” (instead of conglomerate, which is a sedimentary rock that has a matrix holding gravel and rocks together). Alternatively, melted plastic can flow into holes and cracks in rocks to create a plastic-veined core. Plastiglomerate has been found on two Hawaiian islands, and is most likely on many more of the world’s coastlines, especially in countries where people burn trash piles. Much of it would sink in water and could be buried further under sediment, even becoming part of the geologic record!Paleontologist Jan Zalasiewicz said that if these get into the fossil record, “Plastics, including plastiglomerates, would be one of the key markers by which people could recognize the beginning of the Anthropocene.” This is a sobering thought.  However, there is a chance plastiglomerates wouldn’t last too long in areas of tectonic activity, where rocks are heated and exposed to high pressures.  It may even become oil or a thin carbon film. 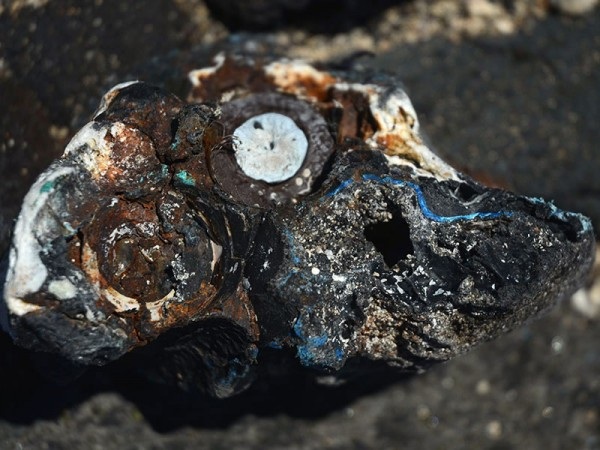 This is an example of plastiglomerate (see the blue plastic vein and spots?)  Photo credit: Patricia Corcoran
Tweet
The following two tabs change content below.