NASA has built a Low-Density Supersonic Decelerator (LDSD), which is being called a flying saucer because it is saucer-shaped.  It is a prototype of a device that could transport several tons of supplies to Mars in the future if a space colony is built there, but so far NASA has not been able to properly test it because of non-ideal wind conditions from the launch site in Kauai. The launch would have a helium balloon (a 100-foot wide balloon!) lift the LDSD to 120,000 feet in altitude, where its rocket engine would then kick in and lift it further, at speeds of Mach 4, to 180,000 feet. From there, it would fall at supersonic speeds, and an inner tube-like thing would inflate to expand its diameter and slow it down until a parachute would be released.  Then it would fall into the ocean. Since the winds have been blowing towards land the past two weeks, none of the launch attempts were completed.

NASA chose the flying-saucer shape for the LDSD because the Curiosity Rover descended to Mars in a module of the same shape.  To test the device in Mars-like conditions, it has to experience an atmosphere that is 1% as dense as Earth’s, and this can be found at the edge of Earth’s atmosphere (which is why the prototype has to fly that high).

At this point, NASA is seeing if launch conditions will be good at the end of June.

Background on the LDSD:
http://www.nbcnews.com/science/space/look-out-mars-nasa-gets-its-flying-saucer-ready-launch-n120741

Article on the delays:
http://www.nbcnews.com/science/space/failure-launch-nasas-flying-saucer-stays-grounded-n125911

And, the updated news that all launch opportunities were missed:
http://www.jpl.nasa.gov/news/news.php?release=2014-169 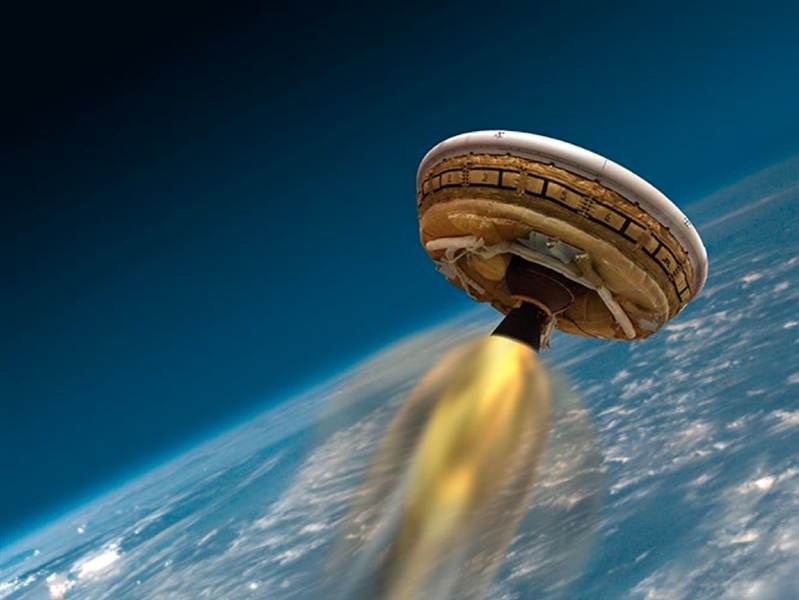