A few months ago Adam Glyn and Maya Sen posted online a draft of their study “Identifying Judicial Empathy“, which was recently published in the American Journal of Political Science and gained significant media attention. The authors write in summary that

we show that judges with at least one daughter vote in a more liberal fashion on gender issues than judges with sons, conditional on the number of children. The effect is robust and appears driven largely by Republican male appointees.

That is, to say, they found that having a daughter makes judges move left on women’s issues and that the greatest effect was on men appointed by Republican presidents.

The article gained attention both because it was the first to find that personal relationships influenced judicial decisions and because it intersected with the debate over the role of empathy in judicial appointments that had been ignited by Obama’s election.  On a 2007 campaign stop the would-be president specifically drew attention to the need for judges to have empathy for disadvantaged groups.

When David Souter retired, Obama reiterated that that this capacity for “empathy” would be a consideration in filling judicial openings in his administration. The resulting debate was heated and broad. (This site captures the range commentary from 2006-11 on the issue.) Obama’s critics on the right, argued that that making empathy a requirement in judicial appointments effectively mandated that judges be biased in favor of certain groups. Others argued that empathy is an important and politically neutral human characteristic that should be a welcome supplement to political ideology as a filter. Both have something of a point.

Critics are right that empathy does cause bias, but the direction of that bias will depend on whom judges have empathy for. Obama called out groups who have faced discrimination, but nominees could also have empathy for groups that have not conventionally been thought to be oppressed: high wage earners, whites denied positions because of affirmative action, sex offenders, Donald Sterling or Corporations. Empathy for these groups would lead to very different policies than those Obama wishes to encourage. Indeed, entire political debates often come down to the direction of sympathy. Here are some examples. 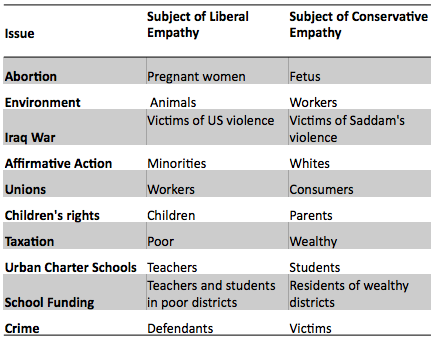 One can, of course, minimize bias by expanding the range of groups for which one has empathy, balancing out conflicting impulses. Most people have empathy for both the fetus and the pregnant woman and both threatened species and workers, to some degree.

At the same time, it is not clear that it is possible to make judicial decisions without covert or overt empathy for one side or the other. Judicial decisions turn on the value that we accord to lives, rights and property, and psychologically it may be that empathy is necessary for assigning these values whether we acknowledge it or not. In supporting a role for empathy Obama supporters may just be asking that an implicit factor in decision making come up for explicit consideration.

In the context of the debate over the Obama policy, Glyn and Sen’s work is simultaneously interesting and unsurprising.  It is interesting because it found that daughters had their greatest effect on Republican appointees rather than those who would come from Democrats like Obama, thus showing that critics may have less to worry about from Obama than a Republican president on this point. At the same time, the result was unsurprising given that Republican male appointees tend to be more conservative on women’s issues than others, giving them more space in which to move left.

The paper reminded me of changes on gay rights in recent years that have also been driven by empathy. Its often been observed that someone who knows a gay person (and critically knows that the person is gay) is far more likely to support gay rights. (Famously Lewis Powell the swing vote in the 1986 case Bowers v. Hardwick unholding Texas sodomy laws told one of his clerks, who is gay, during a discussion of the case that he believed he had never met a gay person. The clerk responded, deadpan in my mind’s eye, that that was unlikely.) According to a poll conducted by the Pew Center in March, 2013, 14% of people had recently changed their views on gay marriage, and nearly one third of them said it was because they know someone who is gay. 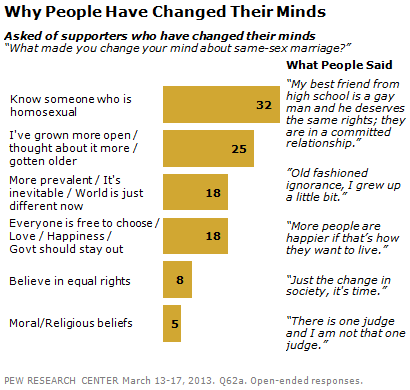 Driving home last night, I heard an episode of Radio Lab along the same lines. The subject of the hour was normalcy and change and one of the stories was about Stu Rassmussen, the first openly transexual person elected to office in the US. 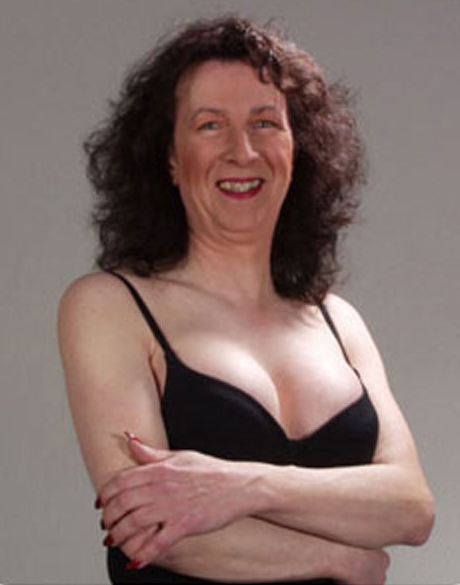 Stu Rassmussen after Some of his Changes

Rassmussen was elected mayor of the conservative Republican town of Silverton, Oregon, in November 2008. They key thing about Rasmussen is that he grew up in Silverton. At one time, he was the town cable guy. So, he had literally been in nearly everyone’s home at some point. He also fixed people’s computers and has run a movie theater there for decades. People loved Stu. Oregon, like much of the west coast, has libertarian tendencies, but it is unlikely that he would have been elected had the residents not known him for a long time and, in spite of his physical appearance, empathized with him as one of their own.

The Glyn and Sen result along with the polls on gay rights and Rasmussen’s story show the power of experience in changing points of view. Karl Popper has argued that science advances through experiments that falsify existing hypotheses. These examples show how human political beliefs change though experiences that indirectly challenge beliefs. It is unlikely that the changes observed in these cases would have occurred through a direct approach of providing evidence that conflicted with factual beliefs of the judges, poll respondents or residents of Silverton. Ideology is, in significant measure, emotional, and the “falsifying experiments” that are likely to be effective are experiences that lean against the person’s inclinations.