For this series of posts, I’m going to take you on a ride through the bewildering jungle that is quantum measurement. I’ve no idea how many parts will be enough, but I’m fairly sure there will be more than one. After all, the quantum mechanics of measurement has been that subject’s “mystery of mysteries” for ages, it now seems.

Before we begin, I should tell you how I became interested in the quantum measurement problem. Because for the longest time I wasn’t. During graduate school (at the University of Bonn), the usual thing happened: the Prof (in my case Prof. Werner Sandhas, who I hope turned eighty this past April 14th) says that they’ll tell us about quantum measurement towards the end of the semester, and never actually get there. I have developed a sneaking suspicion that this happened a lot, in quantum mechanics classes everywhere, every time. Which would explain a lot of the confusion that still reigns.

However, to tell you how I became interested in this problem is a little difficult, because I risk embarrassing myself. The embarrassment that I’m risking is not the usual type. It is because the story that I will tell you will seem utterly ridiculous, outrageously presumptuous, and altogether improbable. But it occurred just as I will attempt to tell it. There is one witness to this story, my collaborator in this particular endeavor, the Belgian theoretical physicist Nicolas Cerf.

Now, because Nicolas and I worked together very closely on a number of different topics in quantum information theory when we shared an office at Caltech, you might surmise that he would corroborate any story I write (and thus not be an independent witness). I’m sure he remembers the story (wait for it, I know I’m teasing) differently, but you would have to ask him. All I can say is that this is how I remember it.

Nicolas and I had begun to work in quantum information theory around 1995-1996. After a while we were studying the quantum communication protocols of quantum teleportation and quantum superdense coding, and in our minds (that is, our manner of counting), information did not add up. But, we thought, information must be conserved. We were certain. (Obviously that has been an obsession of mine for a while, those of you who have read my black hole stories will think to yourselves). 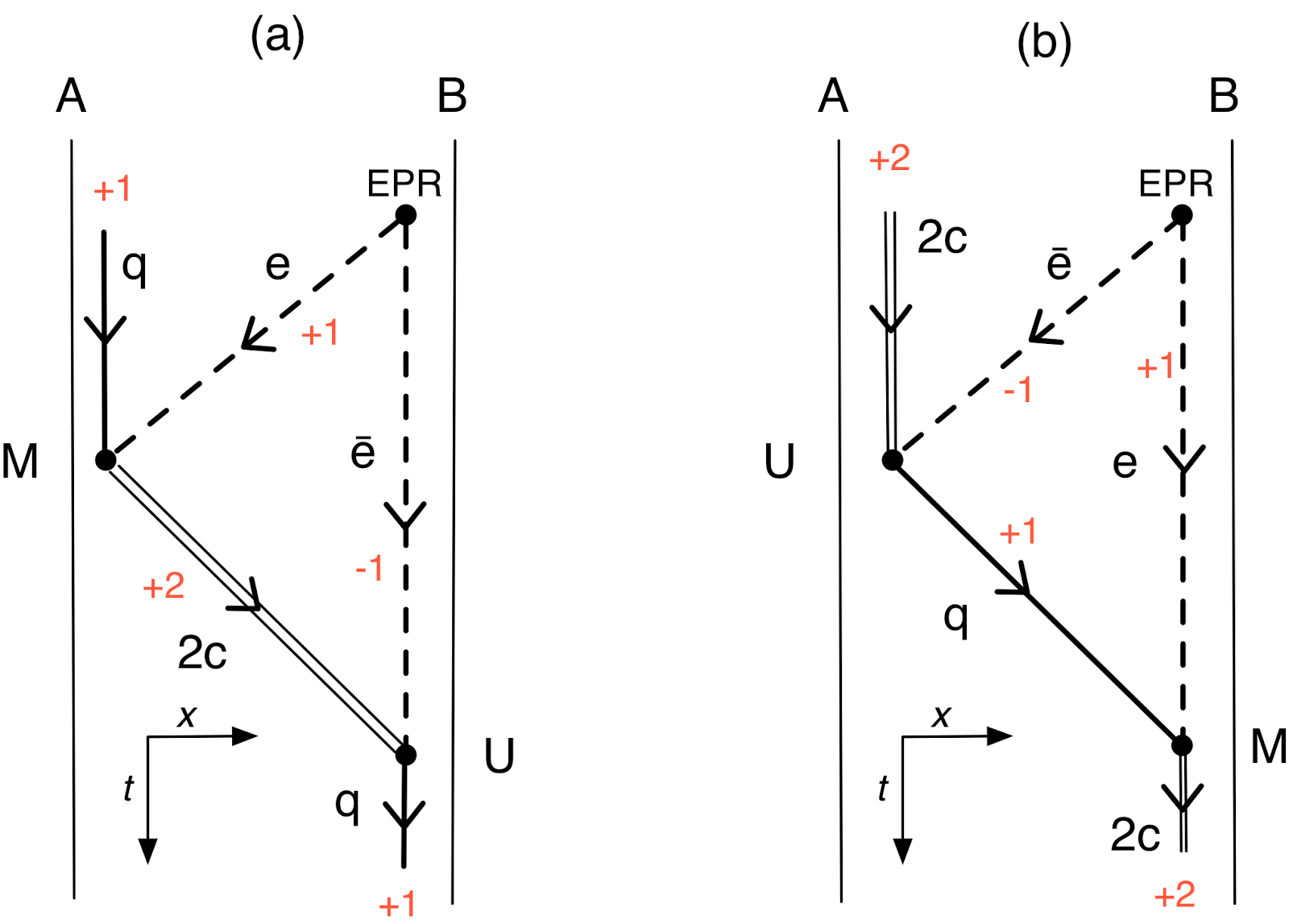 Space-time diagrams for the quantum teleportation process (a) and superdense coding process (b). EPR stand for an entangled Einstein-Podolsky-Rosen pair. Note the information values for the various classical and quantum bits in red. Adapted from Ref. [1]. The letters ‘M’ and ‘U’ stand for a measurement and a unitary opration, respectively. A and B are the comunication partners ‘Alice’ and ‘Bob’.

But information cannot be conserved, we realized, unless you can have negative bits. Negative entropy: anti-qubits (see the illustration above). This discovery of ours is by now fairly well-known (so well-known, in fact, that sometimes articles about negative quantum entropy don’t seem to feel it necessary to refer to our original paper at all). But it is only the beginning of the story (ludicrous as it may well appear to you) that I want to tell.

After Nicolas and I wrote the negative entropy paper, we realized that quantum measurement was, after all, reversible. That fact was obvious once you understood these quantum communication protocols, but it was even more obvious once you understood the quantum erasure experiment. Well, for all we knew, this was flying in the face of accepted lore, which (ever since Niels Bohr) would maintain that quantum measurement required an irreversible collapse of the quantum wavefunction. Ordinarily, I would now put up a picture of the Danish physicist who championed wave function collapse, but I cannot bring myself to do it: I have come to loathe the man. I’m sure I’m being petty here.

With this breakthrough discovery in mind (“Quantum measurement is reversible!”) Nicolas and I went to see Hans Bethe, who was visiting Caltech at the time. At this point, Hans and I had become good friends, as he visited Caltech regularly. I wrote up my recollections of my first three weeks with him (and also our last meeting) in the volume commemorating his life. (If you don’t want to buy that book but read the story, try this link. But you should really buy the book: there’s other fun stuff in it). The picture below is from Wikipedia, but that is not how I remember him. I first met him when he was 85. 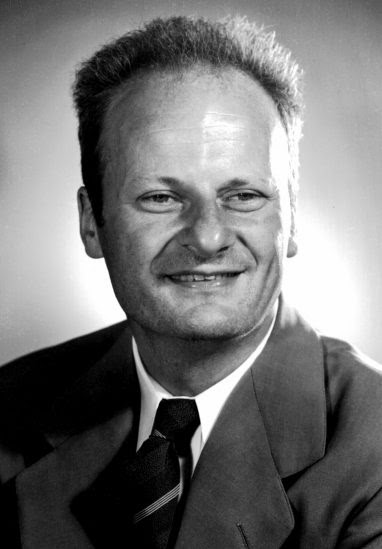 Alright, enough of the preliminaries. Nicolas Cerf and I decided to ask for Hans’s advice, and enter his office, then on the 3rd floor of Caltech’s Kellogg Radiation Laboratory. For us, that meant one flight of stairs up. We tell him right away that we think we have discovered something important that is relevant to the physics of quantum measurement, and start explaining our theory. I should tell you that what we have at this point isn’t much of a theory: it is the argument, based on negative conditional quantum entropies, that quantum measurement can in principle be reversed.

Hans listens patiently. Once in a while he asks a question that forces us to be more specific.

After we are done, he speaks.

After that, there is a moment of silence. Both Nicolas and I are utterly stunned.

I am first to ask the obvious.

“Can you explain to us why?”

You see, it is fairly improbable that a physicist of the caliber of Hans Bethe tells you that you have solved the “mystery of mysteries”. Neither Nicolas nor I had seen this coming from a mile away. And we certainly had no idea why he just said that.

We were waiting with–shall we say–bated breath. Put yourself into our position. How would you have reacted? What came after was also wholly unexpected.

After I asked him to explain that last statement, he was silent for–I don’t know–maybe three seconds. In a conversation like this, that is bordering on a perceived eternity.

My recollection is fuzzy at this point. Either he began by saying “I can’t explain it to you”, or he immediately told the story of the Mathematics Professor who lectures on a complex topic and fills blackboard after blackboard, until a student interrupts him and asks: “Can you explain this last step in your derivation to me?”

I know Hans well enough at this point that I press on. I cannot let that statement go just like that. He did go on to try to explain what he meant.  Now of course I wish I had taken notes but I didn’t. But what he said resonated in my mind for a long time (and I suspect that this is true for Nicolas as well). After what he said, we both dropped everything we were doing, and worked only on the quantum measurement problem, for six months, culminating in this paper.

This is nowhere near an exact rendition of what he said. All I remember is him talking about atomic decay, and measuring the product of the decay and that this is conditional on previous events, and (that is the key thing I remember) that this gives rise to these long arcs of successive measurements whose outcomes are conditional on the past, and condition the future.

Both Nicolas and I kept trying to revive that conversation in our memory when we worked on the problem for the six months following. (Hans left Caltech that year the day after our conversation). Hans also commented that our finding had deep implications for quantum statistical mechanics, because it showed that the theory is quite different from the classical theory after all. We did some work on the quantum Maxwell Demon in reaction to that, but never really had enough time to finish it. Other people after us did. But for the six months that followed, Nicoals and I worked with only this thought in our mind:

“He said we solved the problem. Let us find out how!”

In the posts that follow this one, I will try to give you an idea of what it is we did discover (most of it contained in the article mentioned above). You will easily out find that this article isn’t published (and I’ll happily tell you the story how that happened some other time). While a good part of what’s in that paper did get published ultimately, I think the main story is still untold. And I am attempting to tell this story still, via a preprint I have about consecutive measurements, that I’m also still working on. But consecutive measurement is what Hans was telling us about in this brief session, that changed the scientific life of both Nicolas and I. He knew what he was talking about, but he didn’t know how to tell us just then. It was obvious to him. I hope it will be obvious to me one day too.

Even though the conversation with Hans happened as I described, I should tell you that 18 years after Hans said this to us (and thinking about it and working on it for quite a while) I don’t think he was altogether right. We had solved something, but I don’t think we solved “the whole thing”. There is more to it. Perhaps much more.

Stay tuned for Part 2, where I will explain the very basics of quantum measurement, what von Neumann had to say about it, as well as what this has to do with Everett and the “Many-world” interpretation. And if this all works out as I plan, perhaps I will ultimately get to the point that Hans Bethe certainly did not foresee: that the physics of quantum measurement is intimately linked to Gödel incompleteness. But I’m getting ahead of myself.