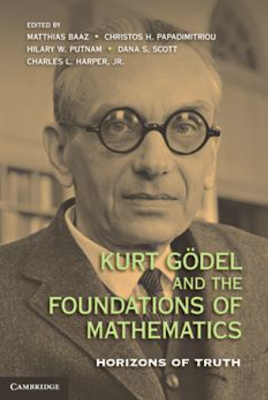 I came across a PDF version of this book online. It contains a number of fine essays, including the ones excerpted from below. A recurring question concerning Godel’s incompleteness results is whether they impact “interesting” mathematical questions.

CHAPTER 21 The Godel Phenomenon in Mathematics: A Modern View: … Hilbert believed that all mathematical truths are knowable, and he set the threshold for mathematical knowledge at the ability to devise a “mechanical procedure.” This dream was shattered by Godel and Turing. Godel’s incompleteness theorem exhibited true statements that can never be proved. Turing formalized Hilbert’s notion of computation and of finite algorithms (thereby initiating the computer revolution) and proved that some problems are undecidable – they have no such algorithms.

Though the first examples of such unknowables seemed somewhat unnatural, more and more natural examples of unprovable or undecidable problems were found in different areas of mathematics. The independence of the continuum hypothesis and the undecidability of Diophantine equations are famous early examples. This became known as the Godel phenomenon, and its effect on the practice of mathematics has been debated since. Many argued that though some of the inaccessible truths above are natural, they are far from what is really of interest to most working mathematicians. Indeed, it would seem that in the seventy-five years since the incompleteness theo- rem, mathematics has continued thriving, with remarkable achievements such as the recent settlement of Fermat’s last “theorem” by Wiles and the Poincare conjecture by Perelman. Are there interesting mathematical truths that are unknowable?

The main point of this chapter is that when knowability is interpreted by modern standards, namely, via computational complexity, the Godel phenomenon is very much with us. We argue that to understand a mathematical structure, having a decision pro- cedure is but a first approximation; a real understanding requires an efficient algorithm. Remarkably, Godel was the first to propose this modern view in a letter to von Neumann in 1956, which was discovered only in the 1990s.

Meanwhile, from the mid-1960s on, the field of theoretical computer science has made formal Godel’s challenge and has created a theory that enables quantification of the difficulty of computational problems. In particular, a reasonable way to capture knowable problems (which we can efficiently solve) is the class P, and a reasonable way to capture interesting problems (which we would like to solve) is the class NP. Moreover, assuming the widely believed P ̸= NP conjecture, the class NP -complete captures interesting unknowable problems. …

This volume also includes Paul Cohen’s essay (chapter 19) on his work on the Continuum Hypothesis and his interactions with Godel. See also Horizons of Truth.

Cohen: … I still had a feeling of skepticism about Godel’s work, but skepticism mixed with awe and admiration.

I can say my feeling was roughly this: How can someone thinking about logic in almost philosophical terms discover a result that had implications for Diophantine equations? … I closed the book and tried to rediscover the proof, which I still feel is the best way to understand things. I totally capitulated. The Incompleteness Theorem was true, and Godel was far superior to me in understanding the nature of mathematics.

Although the proof was basically simple, when stripped to its essentials I felt that its discoverer was above me and other mere mortals in his ability to understand what mathematics — and even human thought, for that matter — really was. From that moment on, my regard for Godel was so high that I almost felt it would be beyond my wildest dreams to meet him and discover for myself how he thought about mathematics and the fount from which his deep intuition flowed. I could imagine myself as a clever mathematician solving difficult problems, but how could I emulate a result of the magnitude of the Incompleteness Theorem? There it stood, in splendid isolation and majesty, not allowing any kind of completion or addition because it answered the basic questions with such finality.

The reason why we find it possible to construct, say, electronic calculators, and indeed why we can perform mental arithmetic, cannot be found in mathematics or logic. The reason is that the laws of physics “happen” to permit the existence of physical models for the operations of arithmetic such as addition, subtraction and multiplication.

that suggests the primacy of physical reality over mathematics (usually the opposite assumption is made!) — the parts of mathematics which are simply models or abstractions of “real” physical things are most likely to be free of contradiction or misleading intuition. Aspects of mathematics which have no physical analog (e.g., infinite sets) are prone to problems in formalization or mechanization. Physics (models which can to be compared to experimental observation; actual “effective procedures”) does not ever require infinity, although it may be of some conceptual convenience. Hence one suspects, along the lines above, that mathematics without something like the “axiom of infinity” might be well-defined. Is there some sort of finiteness restriction (e.g., upper bound on Godel number) that evades Godel’s theorem? If one only asks arithmetical questions about numbers below some upper bound, can’t one avoid undecidability?