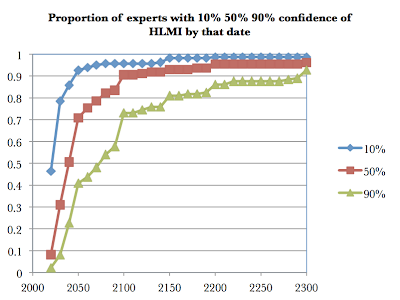 HLMI = ‘high–level machine intelligence’ = one that can carry out most human professions at least as well as a typical human. I’m more pessimistic than the average researcher in the poll. My 95 percent confidence interval has earliest HLMI about 50 years from now, putting me at ~ 80-90th percentile in this group as far as pessimism. I think human genetic engineering will be around for at least a generation or so before machines pass a “strong” Turing test. Perhaps a genetically enhanced team of researchers will be the ones who finally reach the milestone, ~ 100 years after Turing proposed it :-)

Future Progress in Artificial Intelligence: A Poll Among Experts

Abstract: In some quarters, there is intense concern about high–level machine intelligence and superintelligent AI coming up in a few decades, bringing with it significant risks for humanity; in other quarters, these issues are ignored or considered science fiction. We wanted to clarify what the distribution of opinions actually is, what probability the best experts currently assign to high–level machine intelligence coming up within a particular time–frame, which risks they see with that development and how fast they see these developing. We thus designed a brief questionnaire and distributed it to four groups of experts. Overall, the results show an agreement among experts that AI systems will probably reach overall human ability around 2040-2050, and move on to super-intelligence in less than 30 years thereafter. The experts say the probability is about one in three that this development turns out to be ‘bad’ or ‘extremely bad’ for humanity.