This is Part 2 of the “On quantum measurement” series. Part 1: (Hans Bethe, the oracle) is here.

Before we begin in earnest, I should warn you, (or ease your mind, whichever is your preference): this sequence has math in it. I’m not in it to dazzle you with math. It’s just that I know no other way to convey my thoughts about quantum measurement in a more succinct manner. Math, you see, is a way for those of us who are not quite bright enough, to hold on to thoughts which, without math, would be too daunting to formulate, too ambitious to pursue. Math is for poor thinkers, such as myself. If you are one of those too, come join me. The rest of you: why are you still reading? Oh, you’re not. OK.

Hey, come back: this historical interlude turns out to be math-free after all. But I promise math in Part 3.

Before I offer to you my take on the issue of quantum measurement, we should spend some time reminiscing, about the history of the quantum measurement “problem”. If you’ve read my posts (and why else would you read this one?), you’ll know one thing about me: when the literature says there is a “problem”, I get interested.

This particular problem isn’t that old. It arose through a discussion between Niels Bohr and Albert Einstein, who disagreed vehemently about measurement, and the nature of reality itself. 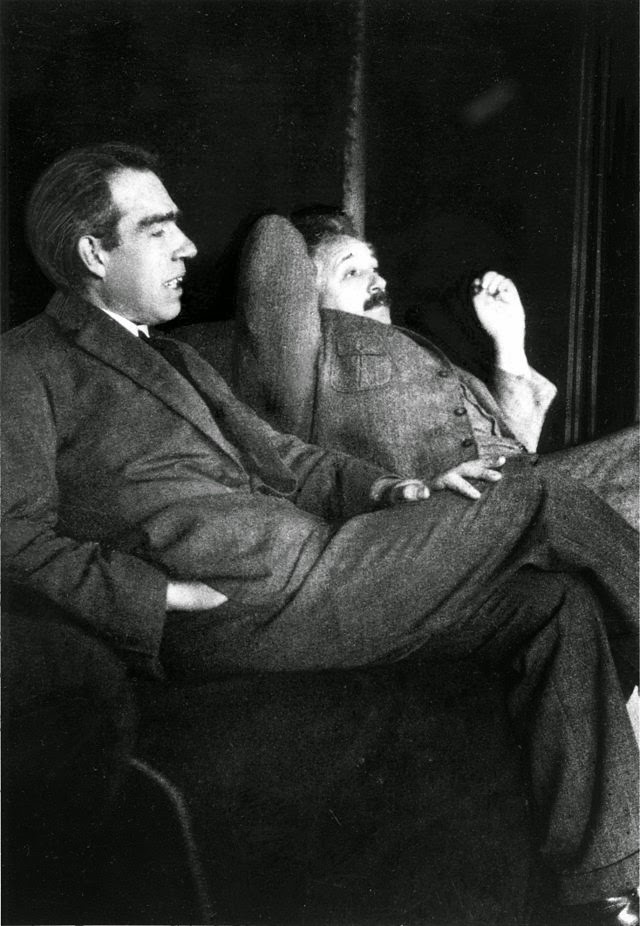 Bohr and Einstein at Ehrenfest’s house, in 1925. Source: Wikimedia

The “war” between Bohr and Eintein only broke out in 1935 (via dueling papers in the Physical Review), but the discussion had been brewing for 10 years at least.

Much has been written about the controversy (and a good summary albeit with a philosophical bent can be found in the Stanford Encyclopedia of Philosophy). Instead of going into that much detail, I’ll just simplify it by saying:

Bohr believed the result of a measurement reflects a real objective quantity (the value of the property being measured).

Einstein believed that quantum systems have objective properties independent of their measurements, and that becuase quantum mechanics cannot properly describe them, the theory must necessarily be incomplete.

In my view, both views are wrong. Bohr’s because his argument relies on a quantum wavefunction that collapses upon measurement (which as I’ll show you is nonsense), and Einstein’s because the idea that a quantum system has objective properties (described by one of the eigenstates of a measurement device) is wrong and that, as a consequence the notion that quantum mechanics must be incomplete is wrong as well. He was right, though, about the fact that quantum systems have properties independently of whether you measure them or not. It is just that we may not ever know what these properties are.

But enough of the preliminaries. I will begin to couch quantum measurement in terms of a formalism due to John von Neumann. If you think I’m obsessed by the guy because he seems to make an appearance in every second blog post of mine: don’t blame me. He just ended up doing some very fundamental things in a number of different areas. So I’m sparing you the obligatory picture of his, because I assume you have seen his likeness enough. 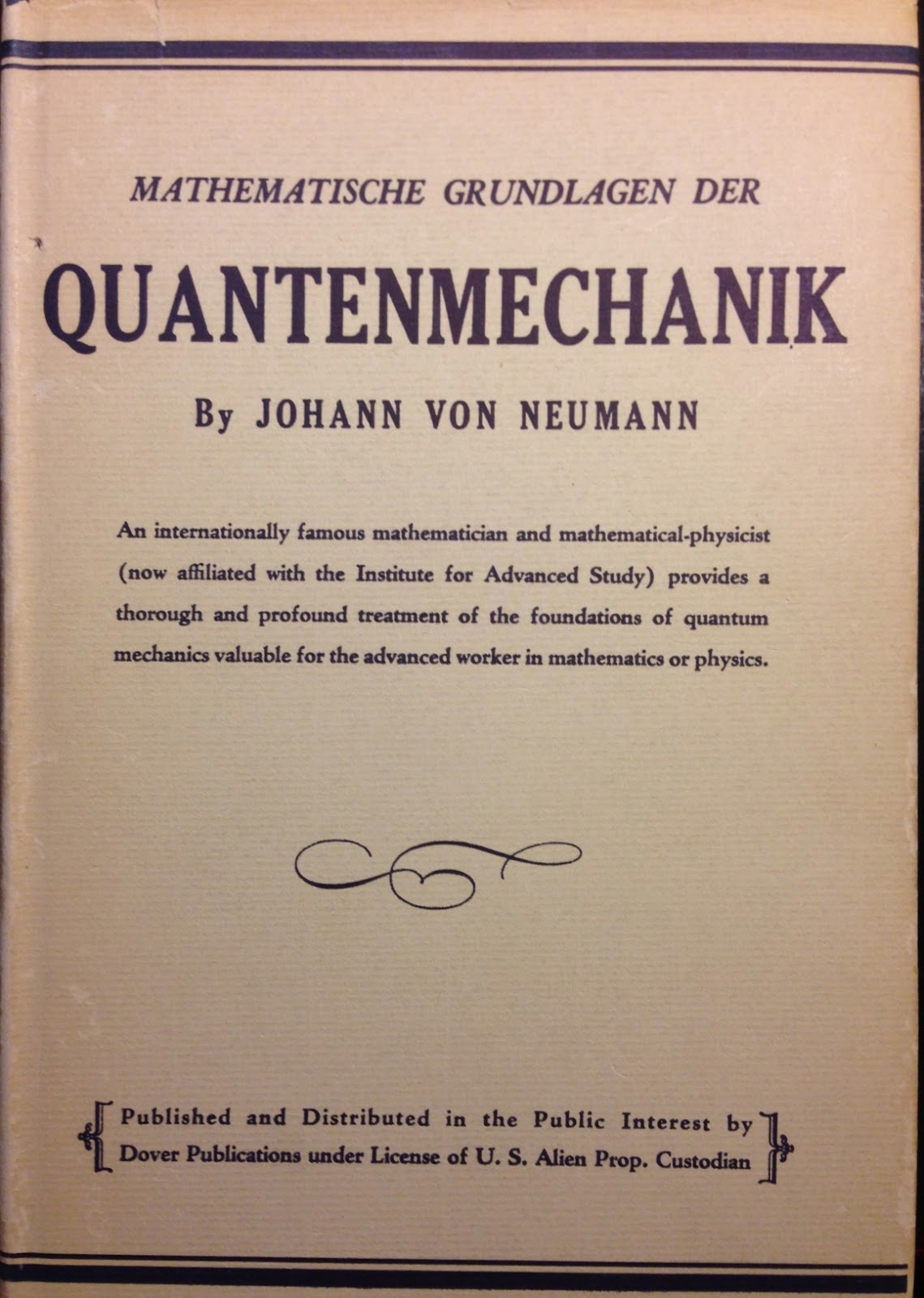 My copy of the “Grundlagen”. This is the version issued by the U.S. Alien Property Custodian from 1943 by Dover Publications. It is the verbatim German book, issued in the US in war time. The original copyright is by J. Springer, 1932.

In this book, von Neumann made a model of the measurement process that had two stages, aptly called “first stage” and “second stage”. [I want to note here that JvN actually called the first stage “Process 2” and the second stage “Process 1”, which today would be confusing so I reversed it.]

The first stage is unitary, which means “probability conserving”. JvN uses the word “causal” for this kind of dynamics. In today’s language, we call that process an “entanglement operation” (I’ll describe it in more details momentarily, which means “wait for Part 3”). Probability conservation is certainly a requisite for a causal process, and I actually like JvN’s use of the word “causal”. That word now seems to have acquired a somewhat different meaning.

The second stage is the mysterious one. It is (according to JvN) acausal, because it involves the collapse of the wavefunction (or as Hans Bethe called it, the “reduction of the wavepacket”). It is clear that this stage is mysterious to Johnny, because he doesn’t know where the collapse occurs. He is following “type one” processes in a typical measurement (in the book, he measures temperature as an example) from the thermal expansion of the mercury fluid column, to the light quanta that scatter off the mercury column and enter our eye, where the light is refracted in the lense and forms an image on the retina, which then stimulate nerves in the visual cortex, and ultimately creates the “subjective experience” of the measurement.

According to JvN, the bounday between what is the quantum system and what is the measurement device can be moved in an arbitrary fashion. He understands perfectly that a division into a system to be measured and a measuring system is necessary and crucial (and we’ll spend considerable time discussing this), but the undeniable fact—that it is not at all clear where to draw the boundary— is a mystery to him. He invokes the philosophical principle of “psychophysical parallelism“—which states that there can be no causal interaction between the mind and the body— to explain why the boundary is so fluid. But it is the sentence just following this assertion that puts the finger on what is puzzling him. He writes:

“Because experience only ever makes statements like this: ‘an observer has had a (subjective) perception’, but never one like this: ‘a physical quantity has taken on a particular value’.”(2)

This is, excuse my referee’s voice, very muddled. He says: We never have the experience “X takes on x”, we always experience “X looks like it is in state x”. But mathematically they should be the same. He makes a distinction that does not exist. We will see later why he feels he must make that distinction. But, in short, it is because he thinks that what we perceive must also be reality. If a physical object X is perceived to take on state x, then this must mean that objectively “X takes on x”. In other words, he assumes that subjective experience must mirror objective fact.

Yet, this is provably dead wrong.

That is what Nicolas and I discovered in the article in question, and that is undoubtedly what Hans Bethe immediately realized, but struggled to put into words.

Quantum reality, in other words, is a whole different thing than classical reality. In fact, in the “worst case” (to be made precise as we go along) they may have nothing to do with each other, as Nicolas and I argue in a completely obscure (that is unknown) article entitled “What Information Theory Can Tell us About Quantum Reality” (3).

What you will discover when following this series of posts, is that if your measurement device claims “the quantum spin that you were measuring was in state up”, then this may not actually tell you anything about the true quantum state. The way I put it colloquially is that “measurement devices tend to lie to you”. They lie, because they give you an answer that is provably nonsense.

In their (the device’s) defense, they have no choice but to lie to you (I will make that statement precise when we do math). They lie because they are incapable of telling the truth. Because the truth is, in a precise information-theoretic way that I’ll let you in on, bigger than they are.

JvN tried to reconcile subjective experience with objective truth. Subjectively, the quantum state collapsed from a myriad of possibilities to a single truth. But in fact, nothing of the sort happens. Your subjective experience is not reflecting an objective truth. The truth is out there, but it won’t show itselves in our apparatus. The beauty of theoretical physics is that we can find out about how the wool is being pulled over our eyes—how classical measurement devices are conspiring to deceive us—when our senses would never allow us a glimpse of the underlying truth.

Math supporting all that talk will start in Part 3.

(1) Einstein (with Podolsky and Rosen) wrote a paper entitled “Can Quantum-Mechanical Description of Physical Reality Be Considered Complete?“. It appeared in Phys. Rev. 47 (1935) 777-780. Four pages: nowadays it would be a PRL. I highly recommend reading it. Bohr was (according to historical records and the narrative in Zurek’s great book about it all) incensed. Bohr reacted by writing a paper with the same exact title as Einstein’s, that has (in my opinion) nothing in it. It is an astonishing paper because it is content-free, but was meant to serve as a statement that Bohr refutes Einstein, when in fact Bohr had nothing.