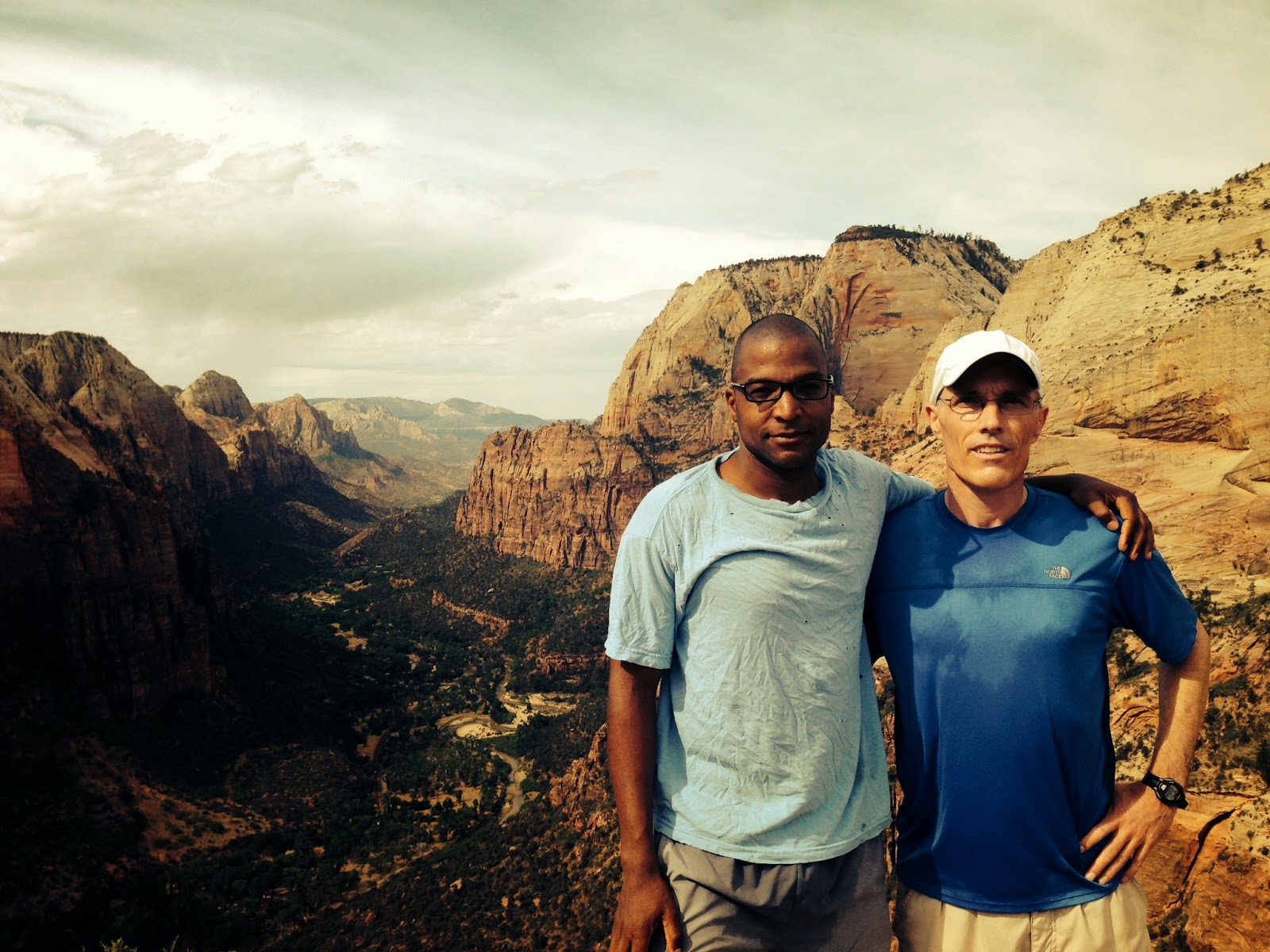 Me (wrinkled, weirdly folded shirt) and My Oldest Friend (since age 6) on Angel’s Landing in Zion National Park this Week

Homophily, our tendency to associate with people similar to ourselves, is one of the reasons why it is difficult for us to break out of our social echo-chambers to experience different perspectives. It is quite likely that homophily has a genetic basis. Evolutionary models predict its occurrence under a wide variety of circumstances, though no genes supporting it have yet been found. These genes would give us a predisposition to find others appealing if they are similar to ourselves.

A recent paper in PNAS by Nicholas Christakis and James Fowler, “Friendship and Natural Selection“, has found evidence for a different, but related, hypothesis. According to the authors, friends are significantly more genetically similar to each other than they are to strangers. In fact, they are on average as closely related as fourth cousins (great-grandchildren of first-cousins).

The authors mention four, not mutually exclusive, reasons for why friends might be genetically similar:

First, correlation in genotypes may be a trivial by-product of the tendency of people to make friends with geographically proximate or ethnoracially similar individuals who also tend to share the same ancestry…Second, people may actively choose and retain friends of a similar genotype or they may avoid or terminate friendships with people who have different genotypes (“birds of a feather flock together”). ..although it is unlikely that people would observe the actual genotypes of others around them, they can observe and prefer certain phenotypes, and these may obviously be influenced by specific genotypes. Third, people may actively choose particular environments, and, in those environments, they may be more likely to encounter people with similar phenotypes influenced by specific genotypes…Fourth, people may be chosen by third parties or otherwise selected into environments or circumstances where they then come into contact with similar people.

The result would not be that interesting if it simply reflected the fact that people tend to acquire friends who live near to them, or belong to their ethnic group, and so are likely to share ancestry. So the authors attempt to control for the effects of common ancestry (first reason) using principle component analysis. The second reason is simply the principle of homophily: if friends are similar to us and people who are similar to us in the way friends are have similar genes, the result would follow.

It is intriguing that genetic structure in human populations may result not only from the formation of reproductive unions, but also from the formation of friendship unions. This observation, in turn, has relevance for the idea of an evocative gene-environment correlation, proposed more than 30 y ago, which suggests that a person’s genes can lead one to seek out circumstances that are compatible with one’s genotype. Our results suggest that these circumstances could include not only the physical environment but also the social environment, and therefore the genotypic constitution of one’s friends.

Genetically similar, but unrelated friends, may serve as kind of “functional kin”. Helping them might help us pass our genes onto the next generation even though we are not related.

It goes without saying, of course, that this is merely one study and that before its results are accepted they need to be reproduced by other groups. Given the challenges researchers have faced in reproducing some of the more striking social science findings over the past few years, the caveat is important.