In the previous two parts, I told you how I became interested in the quantum measurement problem (Part I), and provided a bit of historical background (Part 2). Now we’ll get to the heart of the matter.

Note that I’m using MathJax to display equations in this blog. If your browser shows a bunch of dollar signs and gibberish where equations should appear, you probably have to figure out how to install MathJax on your browser. Don’t email me: I know nothing about such intricacies.

Let me remind you that our hero John von Neumann described quantum measurement as a two-stage process. (No, I’m not showing his likeness.) The first stage is now commonly described as entanglement. This is what we’ll discuss here. I’ll get to the second process (the one where the wavefunction ostensibly collapses, except Hans Bethe told me that it doesn’t) in Part 4.

For the purposes of illustration, I’m going to describe the measurement of a position, but everything can be done just as well for discrete degrees of freedom, such as, you know, spins. In fact, I’ll show you a bunch of spin measurements waaay later, like the Stern-Gerlach experiment, or the quantum eraser. But I’m getting ahead of myself.

Say our quantum system that we would like to measure is in state |Q⟩=|x⟩. I’m going to use Q to stand in for quantum systems a lot. Measurement devices will be called “M”, or sometimes “A” or “B”.

All right. How do you measure stuff to begin with?

In classical physics, we might imagine that a system is characterized by the position variable x, [I’ll write this as “(x)”] and to measure it, all we have to do is to transfer that label “x” to a measurement device. Say the measurement device (before measurement) points to a default location (for example ‘0’) like this: (0). Then, we’ll place that device next to the position we want to measure, and attempt to make the device “reflect” the position:

This is just what I want, because now I can read the position of the thing I want to measure off of my measurement device.

I once in a while get the question: “Why do you have to have a measurement device? Can’t you just read the position off of the system you want to measure directly?” The answer is no, no you can’t. The thing is the thing: it stands there in the corner, say. If you measure something, you have to transfer the state of the thing to something you read off of. The variable that reflects the position can be very different from the thing you are measuring. For example, a temperature can be transferred to the height of a mercury column. In a measurement, you create a correlation between two systems.

In a classical measurement, the operation that makes that possible is a copying operation. You copy the system’s state onto the measurement device’s state. The copy can be made out of a very different material (for example, a photograph is a copy of a 3D scene onto a two-dimensional surface, made out of whatever material you choose). But system and measurement refer to each other.

All right, so measuring really is copying. And reading this the sophisticated reader (yes, I mean you!) starts smelling a rat right away. Because you already know that copying is just fine in classical physics, but it really is against the law in quantum physics. That’s right: there is a no-cloning (or no-xeroxing) theorem, in effect in quantum mechanics. You’re not allowed to make exact copies. Ever.

The no-cloning theorem makes that impossible.

But I won’t, because there is so much more to be said. For example, even though quantum measurements are impossible in principle, it’s not like people haven’t tried, right? So what is it that people are measuring? What are the measurement devices saying?

I’ll tell you, and I guarantee you that you will not like it one bit.

But first, I owe you this piece: to show you how quantum measurement works. So our quantum system Q is in state |x⟩. Our measurement device is conveniently already in its default state |0⟩. You can, by the way, think about what happens if the measurement device is not pointing to an agreed-upon direction (such as ‘0’) before measurement, but Johnny vN has already done this for you on page 233 of his “Grundlagen”. Here he is, by the way, discussing stuff with Ulam and Feynman, most likely in Los Alamos. 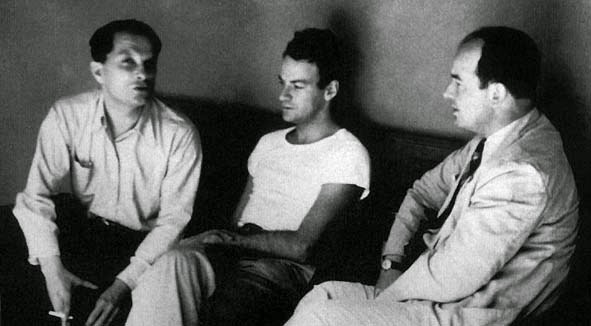 To be a fly on the wall there! Note how JvN (to the right) is always better dressed than the people he hangs out with!

So investigating various possible initial states of the quantum measurement device does nothing for you, he finds, and of course he is correct. So we’ll assume it points to |0⟩.

So we start with |Q⟩|M⟩=|x⟩|0⟩. What now? Well, the measurement operator, which of course has to be unitary (meaning it conserves probabilities, yada yada) must project the quantum state, then move the needle on the measurement device. For a position measurement, the unitary operator that does this is

where X is the operator whose eigenstate is |x⟩ (meaning X|x⟩=x|x⟩), and where P is the operator conjugate to X. P (the “momentum operator”) makes spatial translations. For example, aP|x⟩=|x+a⟩, that is, x was made into x+a.  The ⊗ reminds you that X actis on the first vector (the quantum system), and P acts on the second (the measurement device).

So, what this means is that

Yay: the state of the quantum system was copied onto the measurement device! Except that you already can see what happens if you try to apply this operator to a superposition of states such as |x+y⟩:

And that’s not at all what you would have expected if measurement was like the classical case, where you would have gotten (|x⟩+|y⟩)(|x⟩+|y⟩). And what I just showed you is really just the proof that cloning is impossible in quantum physics.

So there you have it: quantum measurement is impossible unless the state that you are measuring just happens to already be in an eigenstate of the measurement operator, that is, it is not in a quantum superposition.

Whether or not a quantum system is in a superposition depends on the basis that you choose to perform your quantum measurement. I do realize that the concept of a “basis” is a bit technical: it is totally trivial to all of you who have been working in quantum mechanics for years, but less so for those of you who are just curious. In everyday life, it is akin to measuring temperature in Celsius or Fahrenheit, for example, or location in Euclidean as opposed to polar coordinates. But in quantum mechanics, the choice of a basis is much more fundamental, and I really don’t know of a good way to make it more intuitive (meaning, without a lot more math). A typical distinction is to measure photon polarization either in terms of horizontal/vertical, or left/right circular. I know, I’m not helping. Let’s just skip this part for now. I might get back to it later.

So what happens when you measure a quantum system, and your measurement device is not “perfectly aligned” (basis-wise) with the quantum system? As it in fact almost never will be, by the way, unless you use a classical device to measure a classical system. Because in classical physics, we are all in the same basis automatically.  (OK, I see that I’ll have to clarify this to you but trust me here.)

Look forward to Part 4 instead. Where I will finally delve into “Stage 2” of the measurement process. That is the one that baffled von Neumann, because he could not understand where exactly the wavefunction collapses. And in hindsight, there was no way he could have figured this out, because the wavefunction never collapses. Ever. What I’ll show you in Part 4 is how a measurement device can be perfectly (by which I mean intrinsically) consistent, yet tell you a story about what the quantum state is and lie to you at the same time. Lie to you, through its proverbial teeth, if it had any.

But come on, cut the measurement device some slack. It is lying to you because it has no choice. You ask it to make a copy of the quantum state, and it really is not allowed to do so. What will happen (as I will show you), is that it will respond by displaying to you the square of some part of the amplitude of the quantum wavefunction. In other words, I’ll show you how Born’s rule comes about, quite naturally. In a world where no wavefunction collapses, of course.