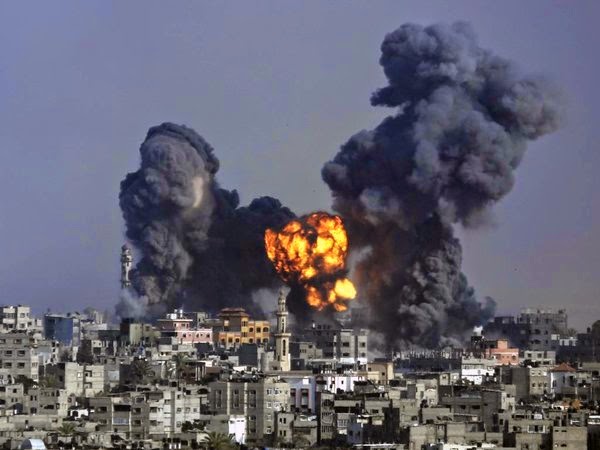 Smoke and Fire from the Explosion of an Israeli Strike, Gaza City, 7/22/14

For a variety of reasons the Israeli-Palestinian conflict is a perfect ideological crucible, similar to the abortion debate. Lines are clearly drawn. Each side is extremely good at identifying weaknesses in the opposing position and stating the strongest arguments in favor of its own view. There is a tendency to overplay one’s hand, however, either by misconstruing facts or the alternative position or stating one’s own view in an untenably strong form.

One of the basic divisions between the American Right and Left on the current conflict in Gaza concerns their views of the two main protagonists. The Right demonizes Hamas and sanitizes the Israeli government. The Left does the reverse. The ensuing contrasts make it easier to side with one or the other.

Nearly all commentary on the Right focuses on Hamas’ belief that civilians are fair game, a position that qualifies it as a terrorist organization. However, the Right also tends to exaggerate the extent of Hamas’ terrorist culture. An article in Breitbart paints Hamas as Al Qaeda’s ideological twin.

Hamas and al-Qaeda are of the same ilk. Brothers in arms, both Islamist terrorist groups are funded by Iran and theologically motivated to wage a violent jihad, or holy war, against the West. Both deadly organizations aspire to destroy those they consider “infidels” (Americans and Israelis included) while re-establishing a pan-Arab Caliphate and, in so doing, have killed too many innocents. While al-Qaeda can be credited for the deaths of thousands of Americans on 9/11 and in the Afghan and Iraq wars that followed, Hamas has murdered dozens of Americans abroad. A significant reason why Hamas has not been able to export its terror activities closer to home is the Israeli counter-terror naval, air and land blockade of Gaza, which is meant to prevent Hamas personnel from importing weapons and traveling internationally.

This characterization runs up against the fact that Hamas has no relations with Al Qaeda and has not allowed Al Qaeda into Gaza, unlike other groups like Islamic Jihad and al Aqsa Martyr’s Brigade. The claim about murdering American citizens is repeated in this article in Redstate, which also holds Hamas responsible for the death of the three Israeli teens and criticizes the US administration’s position. (No evidence has yet emerged that Hamas was involved in the teens’ killing.)

In an Op-ed in WSJ, law professor Thane Rosenbaum extends the terrorist label to the civilians in Gaza who elected Hamas:

The people of Gaza overwhelmingly elected Hamas, a terrorist outfit dedicated to the destruction of Israel, as their designated representatives. Almost instantly Hamas began stockpiling weapons and using them against a more powerful foe with a solid track record of retaliation.

To make matters worse, Gazans sheltered terrorists and their weapons in their homes, right beside ottoman sofas and dirty diapers. When Israel warned them of impending attacks, the inhabitants defiantly refused to leave.

On some basic level, you forfeit your right to be called civilians when you freely elect members of a terrorist organization as statesmen, invite them to dinner with blood on their hands and allow them to set up shop in your living room as their base of operations. At that point you begin to look a lot more like conscripted soldiers than innocent civilians. And you have wittingly made yourself targets.

This argument goes one step further than the counterpart argument which maintains that all Israeli settlers are combatants because the settlements are supported by military force and illegal under international law according to the UN.  The argument overlooks the large number of children who have been killed, a point underscored in a response published in the Washington Post by James Downie. 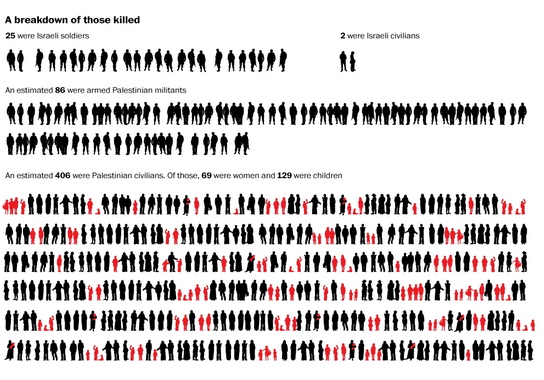 In a conversation on Fox News Megan Kelly poses leading questions, offering John Bolton the opportunity to make a case that will shore up the viewing public against any inclination to be moved by the civilian casualties.  There are three arguments. First, Hamas places military equipment close to residential areas. Second, Hamas’ charter calls for the destruction of the state of Israel and the killing of Jews. Third, Iran provides Hamas with some of its missiles and is ultimately behind the conflict. 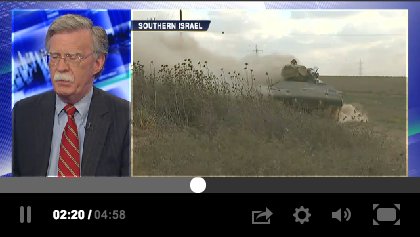 Moreover, according to those on the Right, Israel takes an approach that is diametrically opposed to terrorism: it seeks to avoid civilian casualties to as great an extent as possible. Here is Charles Krauthammer writing in the Washington Post:

“Here’s the difference between us,” explains the Israeli prime minister. “We’re using missile defense to protect our civilians, and they’re using their civilians to protect their missiles.”

(There is the problem that the roof-knocking has itself resulted in civilian casualties.) The position of the Right is to give the Israeli government maximum benefit of the doubt and construe Hamas’ actions in the most negative possible light.

This contrast between the pure terrorist organization Hamas and the Israeli position creates moral clarity that Krauthammer formulates succinctly:

Rarely does international politics present a moment of such moral clarity. Yet we routinely hear this Israel-Gaza fighting described as a morally equivalent “cycle of violence.” This is absurd. What possible interest can Israel have in cross-border fighting? Everyone knows Hamas set off this mini-war. And everyone knows the proudly self-declared raison d’etre of Hamas: the eradication of Israel and its Jews.

Just to note that the Right is not uniform in its opinions, an article in the Weekly Standard by Lee Smith questions Iran’s role in providing Hamas with missiles, while using Hamas’ inferred strategy to justify further Israeli actions.

According to Israeli strategists, Hamas’s rate of missile fire is considerably slower than it was two years ago when Israel mounted Operation Pillar of Defense to stop Hamas rockets. The rate suggests to Israeli officials that Hamas is trying to conserve its arsenal. As the Washington Free Beacon reported, the Israeli Air Force is targeting missile factories as well as tunnels, but that may not be sufficient.

If Hamas is pacing its missile fire, it means they’re in it for the long haul. If they’re crossing red lines by firing missiles at Dimona as well as Ben Gurion airport, it means they’re going all out. The question is why.

Some analysts point to likely Iranian involvement— indeed use of the long-range M-302, not previously in the arsenal of Hamas, underscores that suggestion. It’s true that Hamas’s relations with Iran have been somewhat cooler since they fell out over the Syrian civil war (Hamas sided with their Sunni co-religionists; Tehran has thrown its full weight behind the Assad regime). But the Iranians have a lot of cards to play in Gaza, including Islamic Jihad and other Palestinian factions, as well as Hamas itself. As Israeli analyst Shimon Shapira commented recently, “Iran is more than capable of going over the head of Hamas’s political leadership and arming its military commanders directly.”

If Iran is not in fact driving the campaign, then Hamas may be putting on a demonstration for Tehran of how helpful it can be to the Islamic Republic. With Hezbollah tied down in Syria fighting alongside Assad, Hamas is more useful to Iran than ever—especially since Hamas is now in possession of long-range missiles capable of striking anywhere inside Israel, making it another tool of Iranian deterrence should the Israelis consider striking Iran’s nuclear weapons facilities.

Another dimension of the difference is the focus. The Right tends to pay attention to Hamas’ rockets falling on Israel, the Left to Israeli attacks on Gaza. An editorial in the Weekly Standard “Israel Under Attack” accuses Hamas of nuclear terrorism.

Last week, Hamas fired hundreds of rockets and missiles at targets throughout Israel, including the nuclear reactor at Dimona. Two of the three M-75 missiles targeting Dimona missed the mark entirely, but one had to be brought down by Iron Dome, Israel’s antimissile shield. The U.N. considers an attack on a nuclear reactor an act of nuclear terrorism, which in this case might have taken a catastrophic toll on Israel’s population—as well as the Palestinians.

A consistent feature of the Right’s commentary is the observation that Hamas does not accept Israel’s Right to exist, while failing to note that the Israeli government does not acknowledge a corresponding right on the part of the Palestinians to a state. The entire discussion seems oddly removed from reality. It is difficult to see how existence or statehood can be a right. Countries exist as a result of their power. All current countries have the borders they do because their current inhabitants defeated their previous inhabitants militarily and were able to maintain their grip on their territory. Israel displaced 800,000 Palestinians when it was founded in 1948 just as the US displaced millions of Native Americans over a longer period. The reasonable question in the current context is whether each party believes that the other state should be allowed to exist. Hamas does not want Israel to exist. Israel’s current government does not want a Palestinian state.

This array of arguments leads the Right to the conclusion that Israel should be allowed to prosecute the campaign to the bitter end, a position endorsed by the The New York Post editorial board under the title “Let Israel Do its Job“, though they do not present it as a conflict that may lead to hundreds of civilian casualties.

Now that Prime Minister Benjamin Netanyahu has dispatched Israeli ground troops into Gaza, he has one priority: accomplishing the mission.

This means destroying the network of underground tunnels Hamas uses to sneak its operatives into Israel for terrorist attacks. It also means depriving Hamas of the rockets it is firing into Israel.

President Obama recognizes Israel’s right to defend itself but has cautioned Netanyahu to act “in a way that minimizes civilian casualties.” We’ll leave aside that this is already standard Israeli policy. If it weren’t, Gaza would have been flattened by now.

(Obviously the last claim expresses a false dichotomy. There is a large continuum between minimizing civilian casualties and flattening Gaza. Moreover, Israeli’s actual goals, which the government has probably not stated publicly, will also set a lower bound on the level of casualties. Since targeting plans and their accuracy rates have not been made public, the question of whether the government is trying to minimize the killing of civilians, given those goals, cannot be resolved empirically at this point. Still, events like the shelling of a UN school make it seem unlikely that minimizing casualties is the highest priority.)

By reading the Right, you get the strongest arguments in favor of the Israeli government’s position and abundant material for attacking Hamas, even if both are overstated.