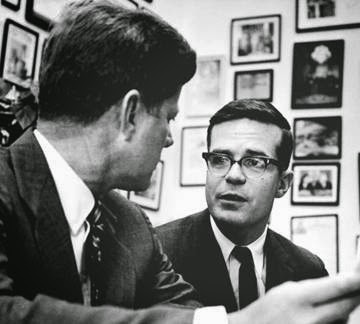 I just came across what has become one of my favorite “JFK” quotes, a paragraph likely written by Ten Sorenson, Kennedy’s chief speech writer.

The greatest enemy of truth is very often not the lie, deliberate, contrived and dishonest, but the myth — persistent, pervasive and unrealistic. Too often we hold fast to the cliches of our forebearers. We subject all facts to a prefabricated series of interpretations. We enjoy the comfort of opinion without the discomfort of thought.

He goes on the say that “mythology distracts us everywhere—in government as in business, in politics as in economics, in foreign affairs as in domestic affairs.” (The quote is from his Yale commencement address, June 11, 1962.)

What Kennedy calls for is, of course, more easily said than done, and Kennedy was himself blinded by bias on a variety of issues from the dangers posed by Fidel Castro to uneasiness over racial integration to the ability of highly educated, smart people, with no experience to perform tasks like intelligence vetting that really require skill and experience. Still, I appreciate the sentiment.