As we age, we lose muscle mass and along with it physical strength and vitality. The same is true of our brains and cognition. The volume of our brains decreases as we get older, and this reduction in size has been linked to reduced cognitive performance. It is not known precisely why our brains shrink in old age, though the fact that women’s brains shrink less than men’s suggests estrogen may be protective

The existence age-related cognitive decline has led to the search for factors that can enhance brain health in old age.  A recent epidemiological study (“Regular Fish Consumption and Age-Related Brain Gray Matter Loss“) suggests that eating fish may be one such factor. The study showed that consumption of fish one to four times a week is associated with larger brain volumes in regions of the cerebral cortex involved with memory, navigation and cognition in healthy older adults.

The study enrolled 260 patients aged 65 or older, which made it reasonably well-powered by neuroscience standards. It assessed the effect of eating baked or broiled fish (1) on brain volumes using MRI. Subjects who ate fish more than once per week had on average 4.3% larger gray matter volume in the orbital frontal region (bottom left of figure) and posterior cingulate region (left of figure) and 14% larger volume in the middle part of the temporal lobe (right of figure, below). 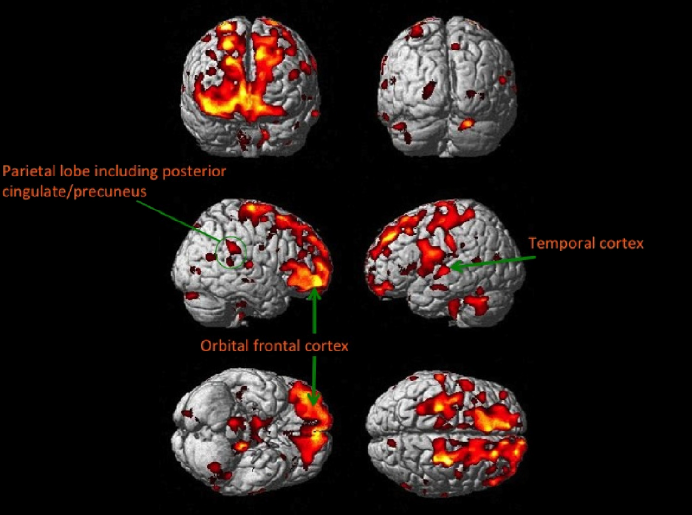 Somewhat surprisingly, the effect of fish did not appear to be mediated by omega-3 fatty acids. Omega-3 consumption and levels of omega-3 in circulation are associated with beneficial health outcomes such as lower levels of cardiovascular disease (post). The present study controlled for plasma omega-3 levels as well as other factors affecting gray matter volume, including education and level of hypertension.  The effect of fish consumption was independent of all of these factors, indicating that it exerted its influence by mechanisms other than raising omega-3 levels in the circulatory system.

The key regression data appear in the following chart. Numbers in bold indicate statistically significant effects. After controlling for other variables, fish consumption had the largest effect on brain matter volume of any of the listed factors.

Before reading too much into these results, it is important to underscore that this was an epidemiological study rather than a randomized controlled trial. Epidemiological studies can only find evidence for association between experimental factors and outcomes. They cannot show causation. Thus, one cannot conclude from the study that eating fish caused the difference in brain volume.  It is quite possible that some other factor, not controlled for in the present study, accounts for the difference in brain volume.

Still, the results do suggest that consuming fish might be good for brain health as we grow older.  Given that there is little evidence that fish consumption can have substantial negative effects on middle aged people, there seems little risk to following the intervention.  Study subjects were over 65. If you hope to receive the benefits of fish consumption by that age, you should probably start consuming it regularly in your 40s and 50s.

(1) The researchers did not investigate fried fish on the assumption that the expected effects would be mediated by omega-3 content, and omega-3s are high in baked and broiled, but not fried, fish. Given that the effect of fish on brain volume turned out to be independent of omega-3 plasm levels, it is probably worth looking into fried fish too.