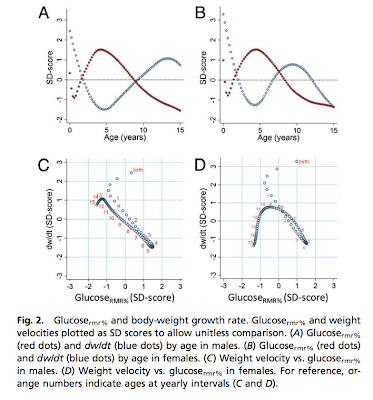 This paper quantifies the unusually high energetic cost of brain development in humans. Brain energy requirements and body-weight growth rate are anti-correlated in childhood. Given these results it would be surprising if nutritional limitations that prevented individuals from achieving their genetic potential in height didn’t also lead to sub-optimal cognitive development. Nutritional deprivation likely stunts both mind and body.

Significance
The metabolic costs of brain development are thought to explain the evolution of humans’ exceptionally slow and protracted childhood growth; however, the costs of the human brain during development are unknown. We used existing PET and MRI data to calculate brain glucose use from birth to adulthood. We find that the brain’s metabolic requirements peak in childhood, when it uses glucose at a rate equivalent to 66% of the body’s resting metabolism and 43% of the body’s daily energy requirement, and that brain glucose demand relates inversely to body growth from infancy to puberty. Our findings support the hypothesis that the unusually high costs of human brain development require a compensatory slowing of childhood body growth.

Abstract
The high energetic costs of human brain development have been hypothesized to explain distinctive human traits, including exceptionally slow and protracted preadult growth. Although widely assumed to constrain life-history evolution, the metabolic requirements of the growing human brain are unknown. We combined previously collected PET and MRI data to calculate the human brain’s glucose use from birth to adulthood, which we compare with body growth rate. We evaluate the strength of brain–body metabolic trade-offs using the ratios of brain glucose uptake to the body’s resting metabolic rate (RMR) and daily energy requirements (DER) expressed in glucose-gram equivalents (glucosermr% and glucoseder%). We find that glucosermr% and glucoseder% do not peak at birth (52.5% and 59.8% of RMR, or 35.4% and 38.7% of DER, for males and females, respectively), when relative brain size is largest, but rather in childhood (66.3% and 65.0% of RMR and 43.3% and 43.8% of DER). Body-weight growth (dw/dt) and both glucosermr% and glucoseder% are strongly, inversely related: soon after birth, increases in brain glucose demand are accompanied by proportionate decreases in dw/dt. Ages of peak brain glucose demand and lowest dw/dt co-occur and subsequent developmental declines in brain metabolism are matched by proportionate increases in dw/dt until puberty. The finding that human brain glucose demands peak during childhood, and evidence that brain metabolism and body growth rate covary inversely across development, support the hypothesis that the high costs of human brain development require compensatory slowing of body growth rate.