I feel very behind on my posts, but have a lot to share, so hopefully I’ll be updating close to daily for a while!  In the hills around Altamont Pass on the edge of the San Francisco Bay Area, a new type of wind turbine used for producing wind energy will be tested for at least a year.  A county board unanimously approved a permit for Ogin Inc. because it plants to use a new turbine design that will hopefully be less lethal to birds and bats flying through the area.  Altamont Pass is a very windy area that has had wind turbines for energy since the 1970s – in fact, it was one of the earliest wind farms in the U.S. and has the largest concentration of wind turbines in the world (4930 turbines). It produces about 125 megawatts of energy per year on average.

The traditional 3-blade wind turbines there have been shown to be very lethal to raptors, including the federally protected golden eagle, because they fly over the hills hunting ground squirrels and don’t see the turbine blades spinning until it is too late. In the Altamont Pass, 4700 birds are killed annually.  This makes this wind farm an ideal spot to test a new wind turbine design to reduce bird deaths. 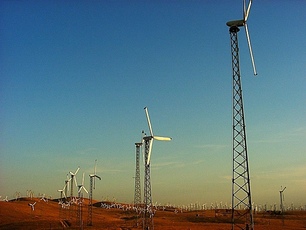 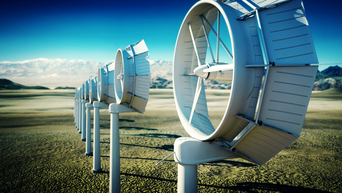 The study of the shrouded wind turbines will examine effects on golden eagle, burrowing owl, American kestrel and red-tailed hawk.  The shroud should be easier for birds to see, and also help prevent them from physically hitting the edge of the blades.   Construction may have started this summer, and the project should be finished by 2015.  Ogin will replace 73 of the traditional turbines with the shrouded turbines. Audubon California, the U.S. Fish and Wildlife Service, and Defenders of Wildlife all support the project.  If scientists find that the new turbines do reduce bird deaths, more shrouded turbines will be installed in the future.