This paper uses Swedish conscript data to examine characteristics of CEOs of large and medium sized companies. Also discussed on Marginal Revolution. Thanks to Carl Shulman for the link. 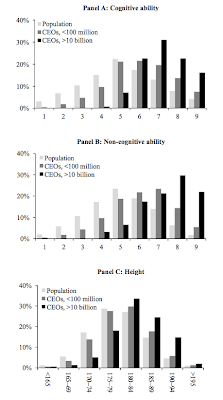 Horizontal axes are on a stanine (STAndard NINE) scale. On this scale a normal distribution is divided into nine intervals, each of which has a width of 0.5 standard deviations excluding the first and last.

Match Made at Birth? What Traits of a Million Swedes Tell Us about CEOs

Abstract: This paper analyzes the role three personal traits — cognitive and non-cognitive ability, and height — play in the market for CEOs. We merge data on the traits of more than one million Swedish males, measured at age 18 in a mandatory military enlistment test, with comprehensive data on their income, education, profession, and service as a CEO of any Swedish company. We find that the traits of large-company CEOs are at par or higher than those of other high-caliber professions. For example, large-company CEOs have about the same cognitive ability, and about one-half of a standard deviation higher non-cognitive ability and height than medical doctors. Their traits compare even more favorably with those of lawyers. The traits contribute to pay in two ways. First, higher-caliber CEOs are assigned to larger companies, which tend to pay more. Second, the traits contribute to pay over and above that driven by firm size. We estimate that 27-58% of the effect of traits on pay comes from CEO’s assignment to larger companies. Our results are consistent with models where the labor market allocates higher-caliber CEOs to more productive positions.

[Non-cognitive ability:] Psychologists use test results and family characteristics in combination with one-on-one semi-structured interviews to assess conscripts’ psychological fitness for the military. Psychologists evaluate each conscript’s social maturity, intensity, psychological energy, and emotional stability and assign a final aptitude score following the stanine scale. Conscripts obtain a higher score in the interview when they demonstrate that they have the willingness to assume responsibility, are independent, have an outgoing character, demonstrate persistence and emotional stability, and display initiative. Importantly, a strong desire for doing military service is not considered a positive attribute for military aptitude (and may even lead to a negative assessment), which means that the aptitude score can be considered a more general measure of non-cognitive ability.

I went to Harvard Business School, a self-styled pantheon for the business elite.

A good number will be at Davos in 20 years time.

Performance beyond a certain level in the vast majority of fields (and business is certainly one of them) is principally a function of having no cognitive and personal qualities which fall below a (high, but not insanely high) hygene threshold — and then multiplied by determination, of course.

Conscientiousness, in fact, is the best single stable predictor of job success for complex jobs (well established in personality psychometrics).

Very high intelligence actually negatively correlates with career success (Kotter), probably because smart people enjoy solving problems, rather than making money selling things — which outside of quant trading, show business and sport is really the only way of being really successful.

There are some extremely intelligent people in business (by which I mean high IQ, not just wise or experienced), but you tend to find them in the corners of the business landscape with the richest intellectual pastures: some areas of law, venture capital, some cutting edge technology fields.

The figure below displays the math, verbal and spatial scores of gifted children tested at age 12, and their eventual college majors and career choices. This group is cohort 2 of the SMPY/SVPY study: each child scored better than 99.5 percentile on at least one of the M-V sections of the SAT.

Scores are normalized in units of SDs. The vertical axis is V, the horizontal axis is M, and the length of the arrow reflects spatial ability: pointing to the right means above the group average, to the left means below average; note the arrow for business majors should be twice as long as indicated but there was not enough space on the diagram. The spatial score is obviously correlated with the M score.