In 1999, I was in the middle of writing about quantum information theory with my colleague Nicolas Cerf. We had discovered that quantum conditional entropy can be negative, discussed this finding with respect to the problem of quantum measurement, separability, Bell inequalities, as well as the capacity of quantum channels. Heady stuff, you might think. But we were still haunted by Hans Bethe’s statement to us that the discovery of negative conditional entropies would change the way we perceive quantum statistical physics. We had an opportunity to write an invited article for a special issue on Quantum Computation in the journal “Chaos, Solitons, and Fractals“, and so we decided to take a shot at the “Quantum Statistical Mechanics” angle.

Because I’m writing this blog post in the series of “Articles I wrote that nobody knows about”, you already know that this didn’t work out as planned.
Maybe this was in part because of the title. Here it is, in all its ingloriousness:

There are many things that, in my view, conspired to this paper being summarily ignored. The paper has two citations for what it’s worth, and one is a self-citation!

There is, of course, the reputation of the journal to blame. While this was a special issue that put together papers that were presented at a conference (and which were altogether quite good), the journal itself was terrible as it was being ruled autocratically by its editor Mohammed El Naschie, who penned and published a sizable fraction of the papers appearing in the journal (several hundred, in fact). A cursory look at any of these papers shows him to be an incurable (but certainly self-assured) crackpot, and he was ultimately fired from his position by the publisher, Elsevier. He’s probably going to try to sue me just for writing this, but I’m trusting MSU has adequate legal protection for my views.

There is, also, the fairly poor choice of a title. “Prolegomena?” Since nobody ever heard of this article, I never found anyone who would, after a round of beers, poke me in the sides and exclaim “Oh you prankster, choosing this title in hommage to the one by Tom Banks!” Because there is indeed a paper by Tom Banks (a string theorist) entitled: “Prolegomena to a theory of bifurcating universes: A nonlocal solution to the cosmological constant problem or little lambda goes back to the future”.  Seriously, it’s a real paper, take a look:

For a reason that I can’t easily reconstruct, at the time I thought this was a really cool paper. In hindsight it probably wasn’t, but it certainly has been cited a LOT more often than my own Prolegomena. That word, by the way, is a very innocent greek word meaning: “An introduction at the start of a book”. So I meant to say: “This is not a theory, it is the introduction to something that I would hope could one day become a theory”.

There is also the undeniable fact that I violated the consistency of singular/plural usage, as “a” is singular, and “Statistical Mechanics” is technically plural, even though it is never used in the singular.
Maybe this constitutes three strikes already. Need I go on?

The paper begins with a discussion of the second law of thermodynamics, and my smattering of faithful readers has read my opinions about this topic before. My thoughts on the matter were born around that time, and this is indeed the first time that these arguments were put in print. It even has the “perfume bottle” picture that also appears in the aforementioned blog post.

Now, the arguments outlined in this paper concerning the second law are entirely classical (not quantum), but I used them to introduce the quantum information-theoretic considerations that followed, because the main point was that for the second law, it is a conditional entropy that increases. And it is precisely the conditional entropy that is peculiar in quantum mechanics, because it can be negative. So in the paper I’m writing about I first review that fact, and then show that the negativity of conditional quantum entropy has interesting consequences for measurements on Bell states. The two figures of the Venn diagrams of same-spin as opposed to orthogonal-spin measurements is reproduced here: 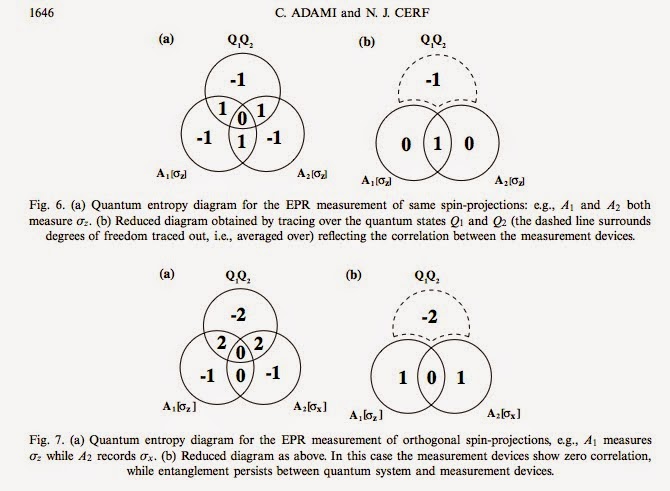 I assure you these results are profound, and because this paper is essentially unknown, you might even try to make a name for yourself! By, umm, citing this one? (I didn’t encourage you to plagiarize, obviously!)

So what comes after that? After that come the Prolegomena of using quantum information theory to solve the black hole information paradox!

This is indeed the first time that any of my thoughts on black hole quantum thermodynamics appear in print. And if you compare what’s in this paper with the later papers that appeared first in preprint form in 2004, and finally in print in 2014, the formalism in this manuscript seems fairly distinct from these calculations.

But if you look closer, you will see that the basic idea was already present there.

The way I approach the problem is clearly rooted in quantum information theory. For example, people often start by saying “Suppose a black hole forms from a pure state”. But what this really means is that the joint state between the matter and radiation forming the black hole, as well as the radiation that is being produced at the same time (which does not ultimately become the black hole) is in a pure state. So you have to describe the pure state in terms of a quantum Venn diagram, and it would look like this: 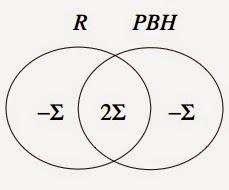 Once the black hole is formed, it evaporates by the process of Hawking radiation. During evaporation, the black hole becomes entangled with the radiation field R’ via the system R: 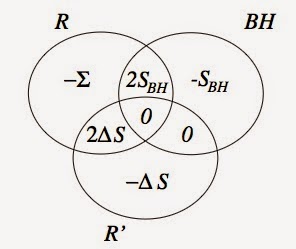 The quantum entropy diagram of three systems is characterized by three (and exactly three) variables, and the above diagram was our best bet at this diagram. Note how the entire system has zero entropy and is highly entangled, but when tracing out the radiation-of-formation, the black hole is completely uncorrelated with the Hawking radiation as it should be.

Now keep in mind, this diagram was drawn up without any calculation whatsoever. And as such, it is prone to be dismissed as a speculation, and it was without doubt a speculation at the time. Five years later I had a calculation, but its acceptance would have to wait for a while.

In hindsight, I’m still proud of this paper. In part because I was bold enough to pronounce the death of the second law as we know it in print, and in part because it documents my first feeble attempts to make sense of the black hole information morass. This was before I had made any calculations in curved space quantum field theory, and my ruminations can therefore easily be dismissed as naive. They were naive (for sure), but not necessarily stupid.

Next week, be prepared for the last installment of the “Nifty Papers” series. The one where I single-handedly take on the bugaboo of computational physics: the “Sign Problem”. That paper has my postdoctoral advisor Steve Koonin as a co-author, and he did provide encouragement and helped edit the manuscript. But by and large, this was my first single-author publication in theoretical/computational physics. And the crickets are still chirping….