With Veteran’s Day fast approaching and being a history buff (odd for an aspiring archaeologist, right?), I spent some free time this week reading about Michigan’s contributions to the Civil War. At the outset of the war Michigan joined the rest of the Union in answering President Lincoln’s call for volunteer soldiers. By the end of the war in 1865 the state had mustered over 50 volunteer regiments, many of which included MSU students. Of particular note, the seven students of the MAC class of 1861 received special exemptions to depart the University early to begin training as Army engineers, something the military was in dire need of at the time. At the end of their enlistment later in 1861 all but two mustered out of service. The two remaining soldiers, Henry D. Benham and Gilbert A. Dickey, reenlisted, were subsequently reassigned to different units, and eventually both received commissions as officers. Unfortunately, First Lieutenant (1LT) Benham died of disease in South Carolina in 1864 while Second Lieutenant (2LT) Dickey was killed in action on the first day of the Battle of Gettysburg. 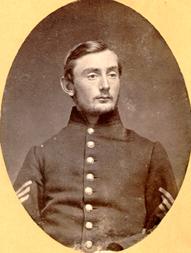 I was immediately fascinated by 2LT. Dickey’s experience at Gettysburg and decided to dig a little deeper and find which unit he served with, then piece together his actions during the battle. I discovered that 2LT Dickey had been assigned to the 24th Michigan Infantry Regiment of Volunteers, which was one of five infantry regiments (all from the Midwest) comprising the 1st Brigade, 1st Division, I Corps. The Iron Brigade… Although several military units on both sides carried the nickname “iron brigade” during the Civil War, the 1st Brigade was the most well known and deserving. Also known as the Black Hats for their distinctive headwear, the Iron Brigade is remembered today as one of the fiercest fighting units during the Civil War and, perhaps due in part to their ferocity on the battlefield, sustained one of the highest casualty rates of the entire war.

In the early hours of the battle on 1 July 1863, the first elements of I Corps under Major General John Reynolds began advancing into a wooded area known as McPherson’s Woods. General Reynolds personally oversaw the deployment of the Iron Brigade, initially placing the 24th Michigan on the extreme left flank of Union line. While encouraging the Iron Brigade to advance against the well-trained Confederates, he was shot and killed by a sharpshooter. General Reynolds’ last words to the 7th Wisconsin Volunteers before falling from his horse were: “Forward! For God’s sake forward!” Although the general’s death was a heavy blow to the Union, the Iron Brigade continued fighting late into the day, engaging in a successful flanking maneuver, which led to a temporary withdrawal by Confederate Major General Henry Heth’s division around midday. Success was short lived however, as the Confederate army counterattacked later in the day. The intense fighting that followed led to severe casualties on both sides, with the Iron Brigade suffering particularly heavily. After no more than a few hours of fighting, the Federal troops were forced to pull back in what became a bloody retreat east through the streets of Gettysburg.

2LT Dickey was killed relatively early in the engagement. 24th Michigan commanding officer, Colonel Henry Morrow reported that the regiment had maneuvered between the 7th Wisconsin Volunteers on the right and the 19th Indiana Volunteers on the left. After receiving severe enemy fire to his regiment’s left flank, Col. Morrow pulled back slightly to reposition the unit. During the maneuver the Confederates attacked in force, leading to severe casualties for the 24th Michigan, including 2LT Dickey, whom Col. Morrow described as a “young officer of great potential”. After the battle, Gilbert Dickey and thousands of his comrades were interred at the Gettysburg National Cemetery.

According to the 24th Michigan Infantry Regiment battlefield marker at Gettysburg, the regiment arrived on the battlefield with a total strength of 494 officers and enlisted men. When the regiment reached its position defending Culp’s Hill at the end of July 1, 363 had become casualties, for a total casualty rate of 73% within a period of roughly eight to ten hours.

Student enrollment at MAC remained low but steady for the duration of the war, with the highest enrollment reaching eighty-eight students in 1865. To contribute to the war effort, the college introduced formal military training and associated coursework related to military life to prepare potential student-soldiers for military service.