Here’s what you missed, in case you have stumbled into this series midway. As you are wont to do, of course.

Part 1 had me reminiscing about how I got interested in the quantum measurement problem, even though my Ph.D. was in theoretical nuclear physics, not “foundational” stuff, and introduced the incomparable Hans Bethe, who put my colleague Nicolas Cerf and I on the scent of the problem.

Part 2 provides a little bit of historical background. After all, a bunch of people have thought about quantum measurement, and they are all rightfully famous: Bohr, Einstein, von Neumann. Two of those three are also heros of mine. Two, not three.

Part 3 starts out with the math of classical measurement, and then goes on to show that quantum mechanics can’t do anything like that, because no-cloning. Really: the no-cloning theorem ruins quantum measurement. Read about it if you don’t believe me.

Sometimes I wonder how our undertanding of quantum physics would be if Bohr had never lived. Well, come to think of it, perhaps I would not be writing this, as Bohr actually gave Gerry Brown his first faculty position at the NORDITA in Copenhagen, in 1960 (yes, before I was even born).  And it was in Gerry’s group where I got my Ph.D., which led to everything else. So, if Niels Bohr had never lived, we would all understand quantum mechanics a little better, and this blog would not only never have been written, but also be altogether unnecessary? So, when I wonder about such things, clearly I am wasting everybody’s time.

All right, let’s do the measurement with three systems: the quantum system Q, and the measurement devices (aka ancillas, see previous posts for explanation of that terminology) A1 and A2.

Initially then, the quantum system and the ancillae are in the state

I’ll be working in the “position-momentum” picture of measurement again, that is, the state I want to transfer from Q to A is the position x. And I’m going to jump right in and say that Q is in a superposition x+y. After measurement, the system QA1A2 will then be

Note that I’m dispensing with normalizing the state. Because I’m not a mathematician, is why. I am allowed to be sloppy to get the point across.

This quantum state after measurement is pure, which you know of course means that it is perfectly “known”, and has zero entropy:

Yes, obviously something that is perfectly known has zero uncertainty. And indeed, any density matrix of the form |.⟩⟨.| has vanishing entropy. If you are still wondering why, wait until you see some mixed (“non-pure”) states, and you’ll know.

Quick note on “tracing out”. I remember when I first heard that jargony terminology of “tracing over” (or “out”) a system. It is a mathematical operation that reduces the dimension of a matrix by “removing” the degrees of freedom that are “not involved’. In my view, the only way to really “get” what is going on there is to do one of those “tracing outs” yourself. Best example is, perhaps, to take the joint density matrix of an EPR pair, and “trace out” one of the two elements. Once you’ve done this and seen the result, you’ll know in your guts forever what all this means. If this was a class, I’d show you at least two examples. Alas, it’s a blog.

So let’s trace out the quantum system, which is not involved in this measurement, after all. (See what I did there?)

Let’s make a quick assessment of the entropies involve here. The entropy of the density matrix ρA1A2 is positive because it is a mixed state. But the entropy of the joint system was zero! Well, this is possible because someone you know has shown that conditional entropies can be negative:

Except when you begin to understand that this kumbaya of understanding may have nothing at all to do with the state of the quantum system! They may all sing the same tune, but the melody can be false. Like I said before: measurement devices can lie to you, and I’ll now proceed to show you that they must.

The pieces of the measurement device are correlated, all right. A quick look at the entropy Venn diagram will tell you as much:

Fig. 1: Venn diagram of the entropies in the measurement device made by the pieces A1 and A2.

Here, the entropy S is the logarithm of the number of states that the device can possibly take on. A simple example is a device that can take on only two states, in which case S=1 bit. You can also imagine a Venn diagram of a measurement device with more than two pieces. If it is more than five your imagination may become fuzzy. The main thing to remember when dealing with classical measurement devices is that each piece of the device is exactly like any other piece. Once you know the state of one part, you know the state of all other parts. The device is of “one mind”, not several.

But we know, of course, that the pieces by themselves are not really classical, they are quantum. How come they look classical?

Let’s look at the entire system from a quantum information-theoretic point of view, not just the measurement device. The Venn diagram in question, of a quantum system Q measured by a classical system A that has two pieces A1 and A2 is 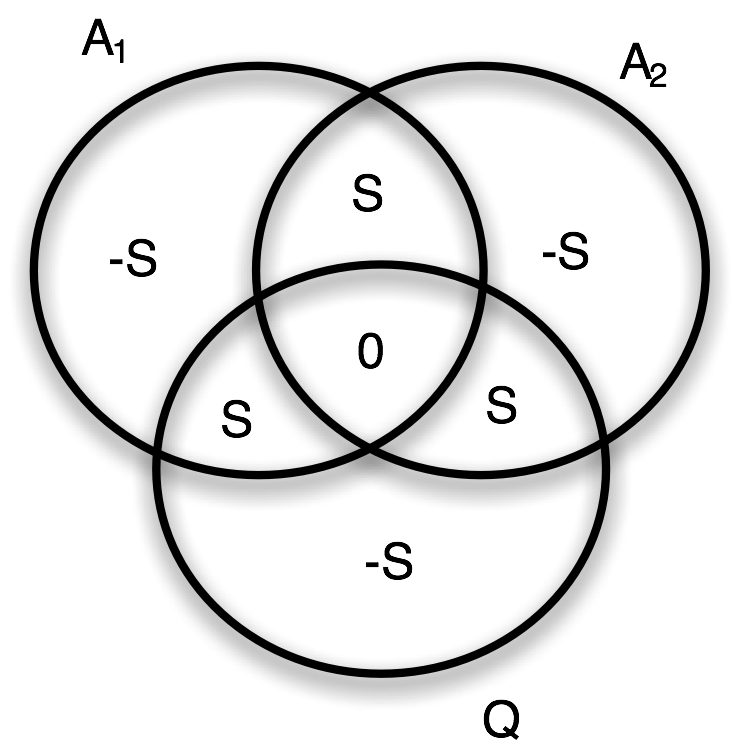 Fig. 2: Venn diagram of entropies for the full quantum measurement problem: including the quantum system A and two “pieces” of the measurement device A.

Now, that diagram looks a bit baffling, so let’s spend some time with it. There are a bunch of minus signs in there for conditional entropies, but they should not be baffling you, because you should be getting used to them by now. Remember, A is measuring Q. Let’s take a look at what the entropy Venn diagram between A and Q looks like:

That’s right, Q and A are perfectly entangled, because that is what the measurement operation does when you deal with quantum systems: it entangles. This diagram can be obtained in a straightforward manner from the joint diagram just above, simply by taking A to be the joint system A1A2. Then, the conditional entropy of A (given Q) is the sum of the three terms −S, S, and −S, the shared entropy is the sum of the three terms S, 0, and S, and so on. And, if you ignore Q (meaning you don’t look at it), then you get back the classically correlated diagram (0,S,0) for A1 and A2 you see in Fig. 1.

But how much does the measurement device A know about the quantum system?

From the entropy diagram above, the shared quantum entropy is 2S, twice as much as the classical device can have! That doesn’t seem to make any sense, and that is because the Venn diagram above has quantum entanglement 2S, which is not the same thing as classical information. Classical information is that which all the pieces of the measurement device agree upon. So let’s find out how much of that shared entropy is actually shared with quantum system.

That, my friends, is given by the center of the triple Venn diagram above (Fig. 2). And that entry happens to be zero!

“Oh, well”, you rumble, “that must be due to how you chose to construct this particular measurement!”

Actually, no. That big fat zero is generic, it will always be there in any tri-partite quantum entropy diagram where the joint system (system and measurement device combined) are fully known. It is a LAW.

“What law is that?”, you immediately question.

That law is nothing other than the law that prevents quantum cloning! The classical device cannot have any information about the quantum system, because as I said in a previous post, quantum measurement is actually impossible! What I just showed you is the mathematical proof of that statement.
“Hold on, hold on!”
What?

“Measurement reveals nothing about the quantum state? Ever?”

I can see you’re alarmed. But rest assured: it depends. If quantum system Q and classical measurement device A (composed of a zillion subsystems A1,….Azillion) are the only things there (meaning they form a pure state together), then yeah, you can’t know anything. This law is really a quite reasonable one: sometimes it is called the law of “monogamy of entanglement“.

Otherwise, that is, if a bunch of other systems exist so that, if you trace over them the state and the measurement device are mixed, then you can learn something from your measurement.

“Back up there for a sec. Monogamy what?”

Monogamy of entanglement? That’s just a law that says that if one system is fully entangled with another (meaning their entropy diagram looks like Fig. 3), then they can’t share that entanglement in the same intimate manner with a third party. Hence the big fat zero in the center of the Venn diagram in Fig. 2. If you think just a little about it, it will occur to you that if you could clone quantum states, then entanglement would not have to be monogamous at all.

“A second is all it takes?”

“Oh, right, because if you’re entangled with one system, and then if you could make a clone…”

Go on, you’re on the right track!

“…then I could take a partner of a fully entangled pair, clone it, and then transform its partner into a new state (because if you clone the state you got to take its partner with it) so that the cloned state is entangled with the new state. Voilà, no more monogamy.”

OK you, get back to your seat. You get an A.

But keep in mind: if the joint system QA does not have exactly zero entropy, it is just a little bit classical, for reasons I discussed earlier in this series. Indeed, the whole concept of “environment-induced superselection” (or einselection) advocated by the quantum theorist Wojciech Zurek hinges precisely on such additional systems that interact with QA (the “environment”), and that are being ignored (“traced over”). They “classicize” the quantum system, and allow you to extract some information about it.

I do realize that “classicize” is not a word. Or at least, not a word usually used in this context.  Not until I gave it a new meaning, right?

With this, dear patient reader, I must end this particular post, as I have exceeded the length limit of single blog posts (a limit that I clearly have not bothered with in any of my previous posts). I know you are waiting for Schrödinger’s cat. I’ll give you that, along with your run-of-the-mill beam splitter, as well as the not-so-run-of-the-mill quantum eraser, in Part 6.

“Quantum eraser? Is that some sort of super hero, or are you telling me that you can reverse a quantum measurement?”

Oh, the quantum eraser is real. The super hero, however, is Marlan Scully, and you’ll learn all about it in Part 6.