Many studies over the years have found that aerobic exercise improves cognitive performance. The following are just a sample of those published in the last 12 months:

“Mind racing: The influence of exercise on long-term memory consolidation“, published in Memory, found that aerobic exercise improved the learning of procedures or written text whether the subjects exercised before or after encoding.

“Effects of an acute bout of exercise on memory in 6th grade children“, which appeared in Pediatric Exercise Science, found that after short intense exercise children were better able to learn a list of words and recall items on the list after a brief delay.

(By contrast “Exercise, Sedentary Pastimes, and Cognitive Performance in Healthy Older Adults” in the American Journal of Alzheimer’s Disease and Other Dementias found that sedentary past times like watching television were associated with declines in cognitive performance.)

Studies on the effects of exercise compare the performance of exercisers with non-exercisers. This methodology leaves any positive findings open to the charge that they might be a mere placebo effect. In other words, the exercising subjects might perform better on tests simply because they expect to. The standard approach to avoiding the placebo effect is to blind subjects, so they do not know whether they are receiving the intervention. This is plainly not possible in the case of exercise. So these studies cannot directly address the placebo claim.

A new study “Is the Effect of Aerobic Exercise on Cognition a Placebo Effect?” in PLOS1 counters this line of argument in a clever way. The study asked participants whether they expected to perform better after regimens of aerobic exercise or simple stretching on three tasks. Overall a similar proportion expected to improve after aerobic and non-aerobic exercise on all three (top). Moreover, among those who expected to improve, the degree of improvement anticipated was statistically equivalent (bottom). 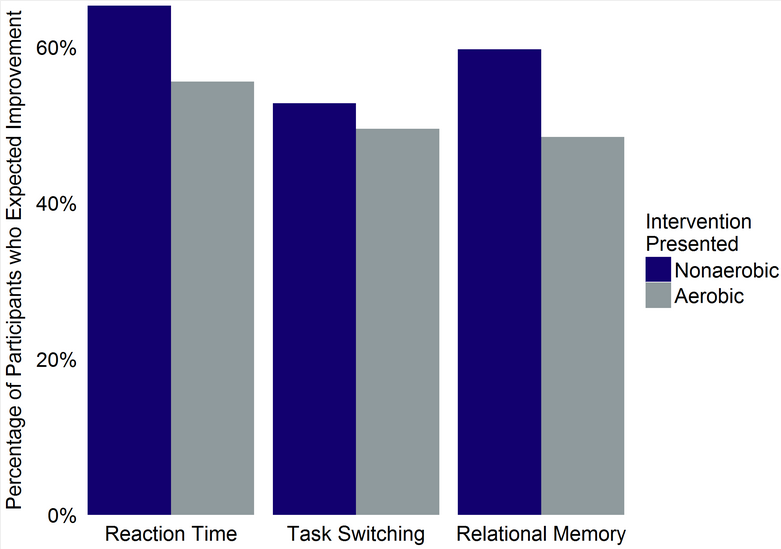 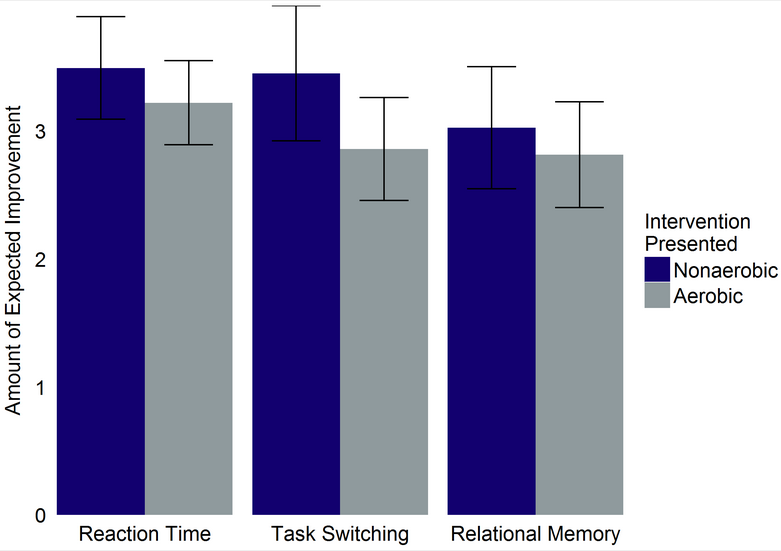 Believed improvement amount as a function of intervention group and task type for all participants.

Given that the subjects had equivalent expectations about the effects of the interventions, these expectations cannot be used to explain observed differences in cognitive performance after aerobic exercise. So, the study gives us reason to believe that improvements in cognitive performance after aerobic exercise are caused by exercise.