As I’ve researched female students on the historical campus this past semester, I keep finding that humor and resiliency are recurring themes in their scrapbooks and journals. Interestingly, it seems that the mechanism of humor may have been used to deflect contentious attitudes about the female presence on a campus that had been historically male-oriented until the university began systematically admitting women in 1896 (female students were allowed on campus as early as 1870, but lack of academic programs and boarding quelled enrollment numbers).

Of course, it should come as no shock that female students have always been funny, creative, engaged, and productive in college life at MSU, but I think that sometimes we gloss over the past with a broad brush, believing that women only studied certain subjects, moved about in certain areas, and kept to certain codes. Not so!

The records kept by the Women’s Student Council from 1917-1934 show many infractions by women who must have been determined to buck some of the traditional standards that applied to them and not to male students. Interestingly, the first order of business called at the first Women’s Student Council meeting was a request by the female senior students to be afforded the same privileges as the male students on campus. It appears that these women understood the university process, and formed their council in response to growing enrollment numbers and desires to have more active voices on campus. Just one month after formation of the council, there is a record detailing a combined meeting of the women’s and men’s councils along with notes about the university president calling meetings to order. 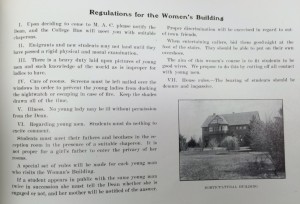 Clearly the council was laying down roots and had the clout to be taken seriously on campus, approximately twenty years after women began enrolling en masse. Rules, proposed and accepted by the council in 1919 demonstrate that was a clear emphasis on honor, conduct, and morality that was directly tied to how women should behave around men; females were given rules regarding calling hours and were expressly not allowed to walk off campus with a male student. 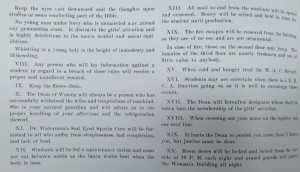 It’s hard to conceptualize these rules today, but I believe that female students subverted some of this university and cultural authority by creating humorous takes on their situations. A females literary club, the Feronian Society, listed these tongue in cheek rules for women on campus in the 1905 Gluck Auf manuscript: