The September issue of Scientific American is about human evolution. It includes articles by Frans de Waal, Gary Stix, John Hawks, and others. And this one by Ian Tattersall, paleoanthropologist at the American Museum of Natural History. His research is on hominins and lemurs.

In Brief
A new theory credits a combination of cultural advances and unpredictable climate change for the exceptionally fast rate of evolution in early humans.
Climate change repeatedly led to fragmentation of hominin populations, creating small groups in which genetic and cultural novelties were rapidly cemented, accelerating speciation.
Our own species, the anatomically distinctive Homo sapiens, was born out of such an event in Africa around 200,000 years ago.
About 100,000 years later an African isolate of our species acquired the ability to use symbols. It was almost certainly this unique symbolic cognition that made it possible to eliminate all hominin competition in little time.

Tattersall argues that human evolution has been unusually rapid in the last 7 million years, with many new hominin groups arising (and going extinct) and our lineage undergoing a lot of adaptive changes (tool use, brain size, anatomical modifications). Sharing cultural know-how is thought to have been under selection, steadily giving rise to humans. He then says this:

But this sort of refinement, one generation at a time, would not have been fast enough to radically reshape the human line in seven million years.

Why not? This is an assertion that Tattersall makes without any given justification. It may be so, but I don’t think anyone can know this. 7 million years is maybe about 350,000 generations. That’s an awful lot. If you start out with a brain that weighs just 40 grams and increase its size by one thousandth of a percent per generation for 350,000 generations, you would end up with a brain the size of humans (1,324 grams). I am not saying this is how it happened, as the fossil data suggest a doubling in between 1 million years ago and 200,000 years ago, for example. Just saying that small modifications can lead to big changes on long time-scales.

Tattersall then discusses the causes of this increase in brain size, saying that the traditional explanation of gene-culture evolution, which posits a “positive feedback between innovation in the biological and cultural spheres,” is wrong. The interaction between genes that enabled them to use tools and new inventions of tool use and sharing those inventions lead to a rapid increase in the size of brains, the thinking goes. However, Tattersall then has this to say:

A little thought, however, suggests that there must have been more to it than that. One problem with this scenario is that it assumes that the pressures of natural selection—stresses to which the species were adapting—remained consistent over long periods. But in fact, Homo evolved during a period of Ice Ages, when the ice caps periodically advanced to what is now New York City and northern England in the Northern Hemisphere, and the tropical zone experienced periods of extreme aridity. Amid such environmental instabilities, no consistent directional selection pressures could have existed. [Emphasis added]

Really? So because there are periodic fluctuations in climate there can’t be a consistent directional selection pressure on brain size? That makes it sound like a colder climate pushes the size in one direction, a warmer climate pushes brain size in the opposite direction. That makes no sense to me. Rather, the environmental instabilities could all select for human ingenuity and intelligence no matter what direction the environmental changes were in. If his choice of words had not made him sound so dead-certain, and instead have made this new view more suggestive than so assured, I would not really have objected. I also don’t know what actually happened, but asserting that “no consistent directional selection pressures could have existed” seems like overreaching. Tattersall continues with what I think is not an argument against directional selection at all:

The more we learn about these climatic oscillations, the more we realize just how unstable the ancient environments of our ancestors must have been. Cores drilled in the ice caps and in seafloor muds reveal that the swings between warmer and dramatically colder conditions became increasingly pronounced after about 1.4 million years ago. The result was that in any one location, resident hominin populations would have needed to react frequently to abruptly changing conditions.

Then there is this picture. 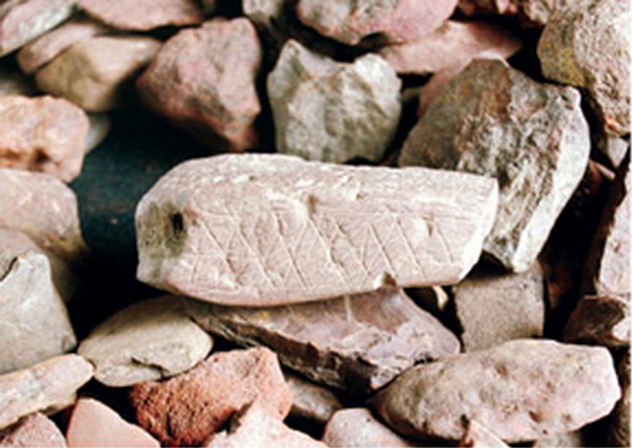 This is a stone with engravings dated to 77,000 years ago.

Most notably, evidence of distinctively modern symbolic cognition emerged rather suddenly and only very late indeed. The earliest overtly symbolic objects—two smoothed ocher plaques with geometric engraving—show up at Blombos Cave in South Africa about 77,000 years ago, significantly after anatomically recognizable H. sapiens had entered the scene (some 200,000 years ago) [see box above]. Because the patterns involved are highly regular, researchers feel confident that they are not random but encode information. Such sudden breakthroughs are not the mark of steady intellectual advancement, generation by generation. [Emphasis added]

What kind of encoding are we talking about? In kindergarten I doodled something much akin to this – regular parallel and crossing lines. I wasn’t conveying any information. And yet this symbolic encoding is exactly what Tattersall proposes is the one thing that gave our lineage an edge over other hominins.

When the dust settled, we stood alone, the serendipitous beneficiaries of cognitive advances, cultural innovation and climate changes that allowed us to eliminate or outlast all hominin competition throughout the Old World in an astonishingly short time. Our competitive edge was almost certainly conferred by our acquisition of our unique mode of symbolic thought, which allows us to scheme and plan in unprecedented ways. Interestingly, this development seems to have occurred within the tenure of our species H. sapiens, evidently spurred by a cultural stimulus, quite plausibly the invention of language, which is the ultimate symbolic activity.

It’s not that I don’t believe symbolic thought played a role. It’s that I don’t believe there is enough evidence that this is the case. Almost certainly this is pure speculation, and we cannot be even close to certain that what eliminated all hominin competition was ability to scheme and plan. Another hypothesis is that they were unable to cope with climate change.

Evidently, then, we have to look away from processes occurring within individual lineages to explain the rapid change among Ice Age hominins. Yet the same elements implicated in the gene-culture coevolution story—environmental pressures and material culture—may still have been in play. They simply operated rather differently from how the traditional portrayal suggests. To understand how these factors may have interacted to trigger evolutionary change, we must first recognize that a population needs to be small if it is to incorporate any substantial innovation, genetic or cultural. Large, dense populations simply have too much genetic inertia to be nudged consistently in any direction. Small, isolated populations, on the other hand, routinely differentiate.

No. Just no. Populations do not need to be small to incorporate new genetic or cultural changes. Genetic inertia (= genetic homeostasis) is the maintenance of genetic variability within a population. But we know that even though random changes have a small effect on large populations, smaller changes in fitness can be discerned by the selective agents (the environmental causes of selection) in large populations. Genetic drift can indeed nudge a small population in one direction or other, but that direction is then random with respect to what is adaptive. Rather, in large populations trait changes that are adaptive (conferring a benefit in terms of survival and reproductive success) can actually become established in a large population. For example,  the current human population is very large, and there is no problem sharing and establishing drastic cultural changes.

On top of that, when the population is large there is more genetic (or cultural) variation, as there is a constant (average) supply of mutations (or inventions) per individual. The more people there are the higher the chance is that someone will have a mutation for increased brain-size or that someone will invent something new and useful for survival. And even though those changes will take longer to propagate and establish in large population, the chance that they will be lost is also larger in a small population. This is basic population genetics theory.

Let me be clear here: I do not think it unlikely that symbolism, tool use, large brains, and small populations were not important drivers of human evolution. I do. I am just a controversialist. My pet hypothesis is that freeing the hands from locomotion led to an arms race between tool use and increased brain size, and my suspicion is that this is a general phenomenon that should be observable in other lineages (like on other planets). Evolving intelligence in seven easy steps: Become bilateral, obtain a head, use four limbs for locomotion, stand up, co-opt front-legs for tool use, get bigger brains, build a radio telescope. [Part of this is discussed in this io9 article about why aliens may look like humans.]

Seeing our amazing species as an evolutionary accident, though, contains a profound lesson. For if we were not shaped by evolution to be something specific—fitted to our environment and tailored to a purpose—then we have free will in a way that other species do not. We can indeed make choices about the ways in which we behave. And this means, of course, that we must accept responsibility for those choices.

Look, it’s not that I disagree that we should take care of the planet, but I would like to make an appeal for a modicum of scientific rigor here. Rigorously, this last paragraph doesn’t hold water, and evolution almost certainly does not have anything to say about free will. – See more at: http://pleiotropy.fieldofscience.com/2014/12/how-to-evolve-intelligence-in-7-easy.html#sthash.NVsHLBnW.dpuf