In this post, I will be sharing two articles that both relate to what could be considered works of art from the ocean involving small, unassuming creatures. Corals and sponges can have very interesting and eye-catching structures, but most people tend to think of them as static and unmoving. A PhD student from Australia named Daniel Stoupin created an amazing video to show us that these organisms are actually very active.  He used macro- and time-lapse photography to speed up their movement, and the results are beautiful and fascinating.  Some remind me of flowers blooming and swaying, or volcanic craters bubbling with lava.  Check it out here:http://earthweareone.com/this-hypnotizing-macro-timelapse-of-exotic-corals-will-take-your-breath-away/

Diatoms are tiny phytoplankton that have cell walls made of silica.  They are well-known for having a huge diversity of shapes and patterns – in fact, there are over 100,000 species, so many look vastly different from each other.  They are not limited to the oceans – they also live in freshwater, damp surfaces, and in soil.  It turns out that in the Victorian era, scientists that looked at diatoms under microscopes liked to arrange them in different interesting patterns, which became an art form known as diatom arrangement. The only person still known to practice this professionally (and make money from it) is a biologist from the UK named Klaus Kemp.  He had to learn how to create the arrangements from scratch because Victorian diatomists had not recorded their techniques.  Matthew Kilip created a short documentary on how Kemp creates these intricate and beautiful arrangements. 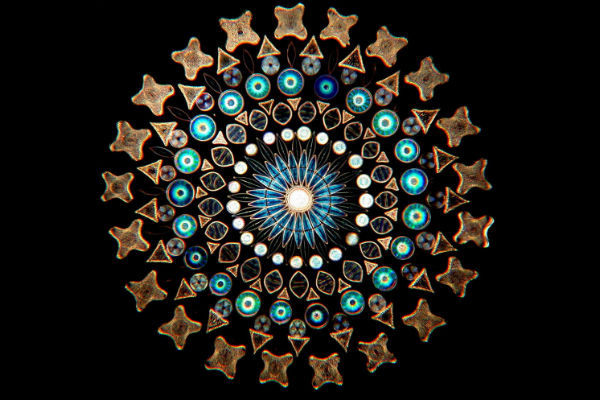