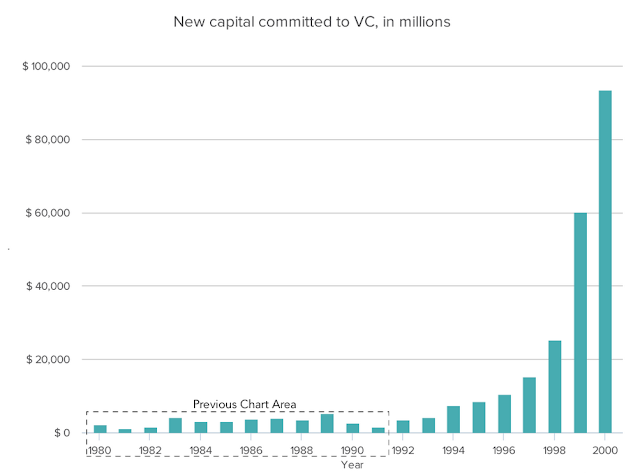 Via Dominic Cummings (@odysseanproject), this long discussion of the history of venture capital, which emphasizes the now largely forgotten 1980s. VC in most parts of the developed world, even large parts of the US, resembles the distant past of the above chart. There is a big gap between Silicon Valley and the rest.

Each type of risk has a different effect on VC returns. Technical risk is horrible for returns, so VCs do not take technical risk. There are a handful of examples of high technical risk companies that had great returns–Genentech43, for example–but they are few44. Today, VCs wait until there is a working prototype before they fund, but successful VCs have always waited until the technical risk was mitigated. Apple Computer, for example, did not have technical risk: the technology worked before the company was funded.

Market risk, on the other hand, is directly correlated to VC returns. When Apple was funded no one had any way of knowing how many people would buy a personal computer; the ultimate size of the market was analytically unknowable. DEC, Intel, Google, etc. all went into markets that they helped create. High market risk is associated with the best VC investments of all time. In the late ’70s/early ’80s and again in the mid to late ’90s VCs were comfortable funding companies with mind-boggling market risk, and they got amazing returns in exchange. In the mid to late ’80s they were scared and funded companies with low market risk instead, and returns were horrible.

Today is like the 1980s. There are a plethora of me-too companies, companies with a new angle on a well-understood market, and companies founded with the hopes of being acquired before they need to bring on many customers. VCs are insisting on market validation before investing, and are putting money into sectors that have already seen big exits (a sign of a market that has already emerged.)

Saying VCs used to take high technical risk and now take high market risk is both an overly optimistic view of the past–the mythical golden age of heroic VCs championing the development of new technologies–and an overly optimistic view of the present–gutsy VCs funding radical innovations that create entirely new markets. Neither of these things is true. VCs have never funded technical risk and they are not now funding market risk45. The VC community is purposely avoiding risk because we think we can make good returns without taking it. The lesson of the 1980s is that no matter how appealing this fantasy is, it’s still a fantasy.