We’ve begun another semester, and it never fails to see how interested students can be in the behavioral dynamics of sex. To start this semester, we’re looking at a few case studies from primary literature on mate guarding.

In short, my students might say that mate guarding is ‘stalking’ or ‘blocking’ other mates from screwing around with your partner. They wouldn’t be wrong, as generally, there are tons of strategies partners can use to be sure they are the only one to ‘do the deed’ with their partner. My students, astute as they are, picked up on this as being a behavior males typically do to protect females, but they were somewhat surprised to find out that mating with multiple males (a.k.a. ‘side pieces’) behind the back of a social partner (a.k.a. ‘hubby’ or ‘main man’) can have advantages for females, ranging from increased fertility to increased genetic diversity (and thereby survival) of offspring. These outside-the-social-partnership matings are called extra-pair copulations (EPC’s), which may result in extra-pair fertilizations (EPFs’) and cuckolding.

Where’s Maury when you need him?

You are NOT the father. Nope. From knowyourmeme.com

We then examined the conflict between males, who want to be the only daddy (but often to several females), and females, who often profit from several dads. This brought up questions on reproductive investment, and how changes in mate availability might influence male and female behavior. As one student put it, “Well, if he is the ONLY guy around, better to have a mate than not. He just needs to get off my back”. True words indeed, as overzealous guarding by male ducks has been known to kill females. Guys, if you’re listening, back off, particularly when there isn’t a threat. 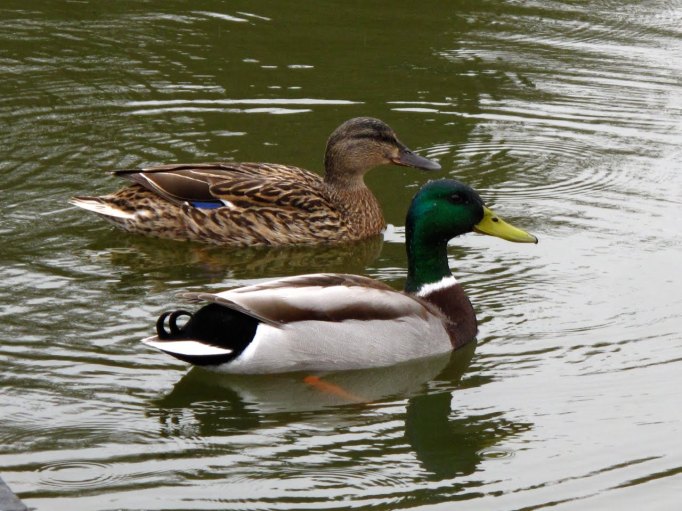 She’s mine. ALLLL mine. Quack. From therattlingcrow.blogspot.com

In the end, the strategies used in nature sparked more questions as to how species evolve and change through sexual conflict and sexual selection. The students began to hypothesize and design experiments to do in and around campus to see what the levels of mate guarding are among guy friends, and what factors (whether long-distance, length of the relationship, or ‘hotness’ of the partner) makes a difference to the level of mate guarding observed.

I’m hoping they will share their data, but I won’t be too upset if they’re guarded about it :)

Emily Weigel (@Choosy_Female) is Ph.D. candidate in the Department of Zoology and in the Ecology, Evolutionary Biology, and Behavior Program at Michigan State University. Originally from Atlanta, Georgia, she earned her Bachelor’s degree in Biology with a focus on interdisciplinary research from the Georgia Institute of Technology. At MSU, Weigel conducts research in the lab of Dr. Jenny Boughman and is affiliated with the BEACON Center for the Study of Evolution in Action. Her dissertation research focuses on how female choice and investment interact with male mating strategies. Additionally, Weigel’s education research asks how and why a background in genetics affects student performance in evolutionary biology. When not researching, Weigel enjoys playing soccer, surfing Netflix, and promoting STEM in the community.