This semester Kate Frederick, the Campus Archaeologist, and I are working on a joint paper that explores how pre-historic Indigenous people used the landscape we currently know as campus. This project was inspired by Kate’s interest and knowledge about the 5000 year old prehistoric site on campus and my interest in incorporating multiple voices in the cultural heritage of MSU. We wanted to explore if the occupants of the prehistoric site organized their settlement in similar ways to how campus is currently laid out. For example, how did pre-historic people use what we understand as “the Sacred Space” or how did they use the river or old stream? Ultimately, we wish to assess changes and continuities to the landscape and incorporate that in how we understand the full history of our campus. We wish to contribute these findings to the conversations about the significance of preserving the Sacred Space and acknowledging Indigenous influences to our Spartan heritage.

In order to accomplish this task we began to gather archival and archaeological data on past Native American presence on present day campus. My first step was to contact the MI State Historical Preservation Office (SHPO) in the Michigan Library and Historical Center. The SHPO office then introduced my to the Royce Map collection for MI. At this point, I had never heard of them, so I had to do some digging to see what they were and how they may be useful to understand land use patterns pre-Campus. I started with a simple Google search that led me to the Library of Congress and the National Parks Service. Here is what they had to say. 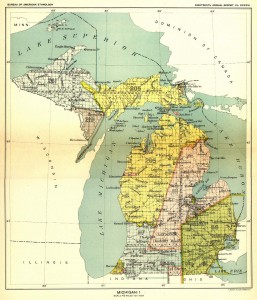 Royce Maps, are named after Charles Royce, an 19th century researcher who set out to collect the information about land cessions of American Indian Nations from the year 1784 through 1894. His final report was completed in the 1890s and included the treaty and legislative information for the release of land across the country as well as maps designating boundaries of Native American tribes. The treaty and legislative information included dates of cession, Native Tribal affiliations, boundaries, as well as historical notes about circumstances and descriptions of the cessions. There are maps for all of the relevant States and the reports are digitized. Also, these reports are apart of the public domain so they are free and accessible to the public.

While these maps are rather late for our particular project goals, they may be able to help us to determine natural boundaries deemed significant by past peoples. For instance, the use of certain waterways as boundaries may have been a prominent feature for pre-historic Indigenous groups as well. Therefore the maps may point us in the direction of potential organizing strategies based on the environment. (see Map 1. Michigan: Indian Land Cessions in the United States, 1784-1894 United States Serial Set, Number 4015)

At first glance, I noticed some other aspects that may be relevant for historical archaeology in general. For instance they may be useful to understand the different strategies of land cessions used during the first 100 years of the US. Also, when coupled with more recent data, the maps may reveal shifting geo-social boundaries among Native Americans, particularly for those who stayed within the ceded territories.

I also see these maps as a source for African Diaspora archaeology as the additional information reveals patterns of internal dispersal of enslaved Africans. For example, the accompanying documentation describes how planters and others moved as a result of the cessions. Descriptions of which planters moved to which region, at times accompanied by hundreds of enslaved Africans, can show the transient nature of enslaved populations even once they arrived in the US and how this affected their identities over time.

All in all, these maps and reports seem to be a good resource for understanding 19th century land exchanges and mobility. While this is my first exposure to them, I am interested if you ever used them? Did you find them useful? I would love to hear more!

For more information visit these sites: