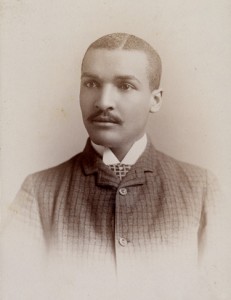 As February is Black History Month, it seems fitting to write a post about the contributions of African Americans to the study of archaeology. John Wesley Gilbert is generally regarded as the first African American archaeologist. Gilbert was born into slavery in Georgia on July 6, 1864. After the Civil War and the abolition of slavery, he completed his primary and secondary education as well as earning work as a farm hand. In 1884 he was accepted to Paine College, where he studied for two years before transferring to Brown University in 1886 after the president of Paine offered to fund the transfer. Gilbert had a particular interest in ancient languages, and from 1890-1891 was the first African American to study at the American School of Classics in Athens, where his focus was Ancient Greek. Participating in archaeological excavations throughout Greece, he discovered Eretria’s gates and walls and ultimately helped develop a map of the site.

These experiences led Gilbert to pursue a Master’s degree in archaeology, where his thesis focused on the villages at Attica. In 1891, Gilbert completed his thesis and became the first African American to receive a Master’s from Brown. Upon graduating, Gilbert accepted a position at his former institution, Paine College, as a professor of Greek Language. Throughout the remainder of the 1800s Gilbert taught courses at Paine and eventually entered into ministry. In 1913, he was appointed president of Miles College in Birmingham, a position he held for one year. Throughout the early 20th century, Gilbert focused much of his time on improving the status of African Americans, especially regarding quality and access to education, criticizing the use of textbooks written by and for a white audience. Demanding a review of the education system, Gilbert sought reforms that would allow young black Americans to “write and to discover their own worthiness”, thereby carving a space from which they could actively contribute to the broader American tradition with their own perspectives.

In 2003 Dr. Anna Agbe-Davies, a historical archaeologist and professor at the University of North Carolina gave an interview with Archaeology Magazine regarding the participation of African Americans in archaeology. When asked why African Americans are not better represented in archaeology, Dr. Agbe-Davies explained that the answer is quite complex. Although it may make sense that talented members of marginalized groups such as racial minorities seek fields that provide better financial opportunities than academia, she cites that black recipients of graduate degrees do not generally pursue careers in high-paying jobs. However, she explains that many have contributed greatly to academic fields like political science and sociology. In Dr. Agbe-Davies’ opinion, the lack of black archaeologists is due more to the “perceived social impact of a field…”

In 2011 the Society of Black Archaeologists was created specifically to address the treatment of African material culture, and to raise interest in archaeology by encouraging those of African descent to enter the field. When asked why she became an archaeologist, Dr. Agbe-Davies explained that her work allows her to see how people in the past used artifacts, either with the purpose of living together or constructing barriers. Her last statement is particularly insightful, and something I believe most, if not all archaeologists consider on some level: “Those who can see the legacy of the past in the present are better equipped to challenge the status quo”.

This is how we keep the Dream alive.

Link for the Society of Black Archaeologists: http://www.societyofblackarchaeologists.com/