I frequently see questions on forums, in blog comments, or in my in-box that suggest the person asking the question is either unfamiliar with the geometry of a linear program, unsure of the significance of it, or just not connecting their question to the geometry. This post is just the starting point for addressing some of those questions. (I dislike reading or writing long posts, so I’m “chunking” my answer, and this is the first chunk.)

Ideally, the feasible region of a linear program (henceforth “LP”) is a convex polytope, a geometric object that is convex, closed, bounded, and has a finite number of flat sides (intersecting at vertices or extreme points). Figure 1 shows a two dimensional example. The shaded area is the feasible region; the dots are the vertices. 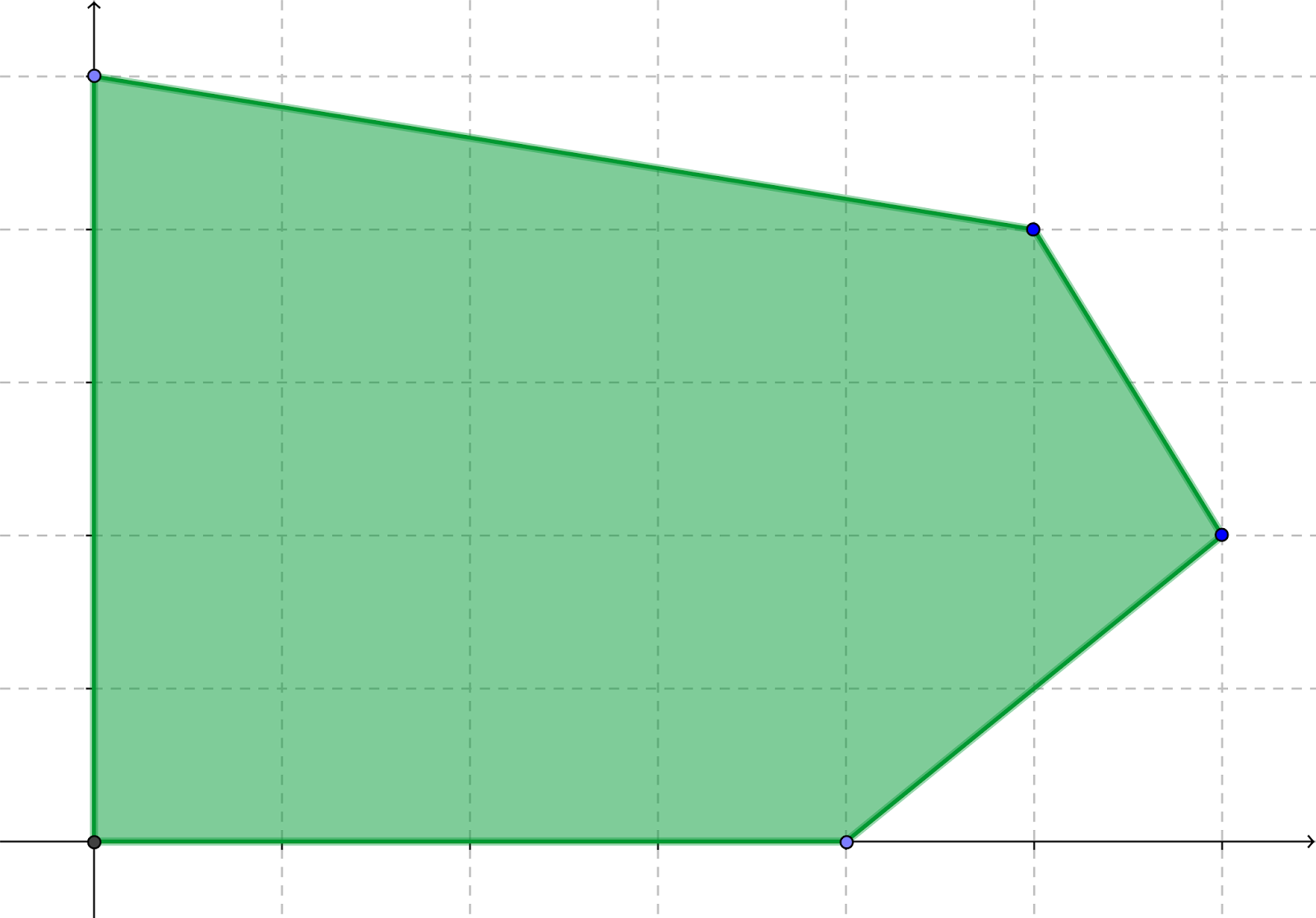 To see why that is important, consider the following candidate for world’s most trivial LP:

Its solution is, shockingly, \(x=0\). Now suppose we try to use a strict inequality in the lone constraint:

The lower bound of the objective function is again 0, but it is never attained, since x=0 is not a feasible solution. This is a consequence of the feasible region not being closed. Technically, while the objective function \((f(x)=x) \) has an infimum over the feasible region, it does not have a minimum. While trivial, this is a useful example of why we never use strict inequalities (>, <) in a mathematical program. 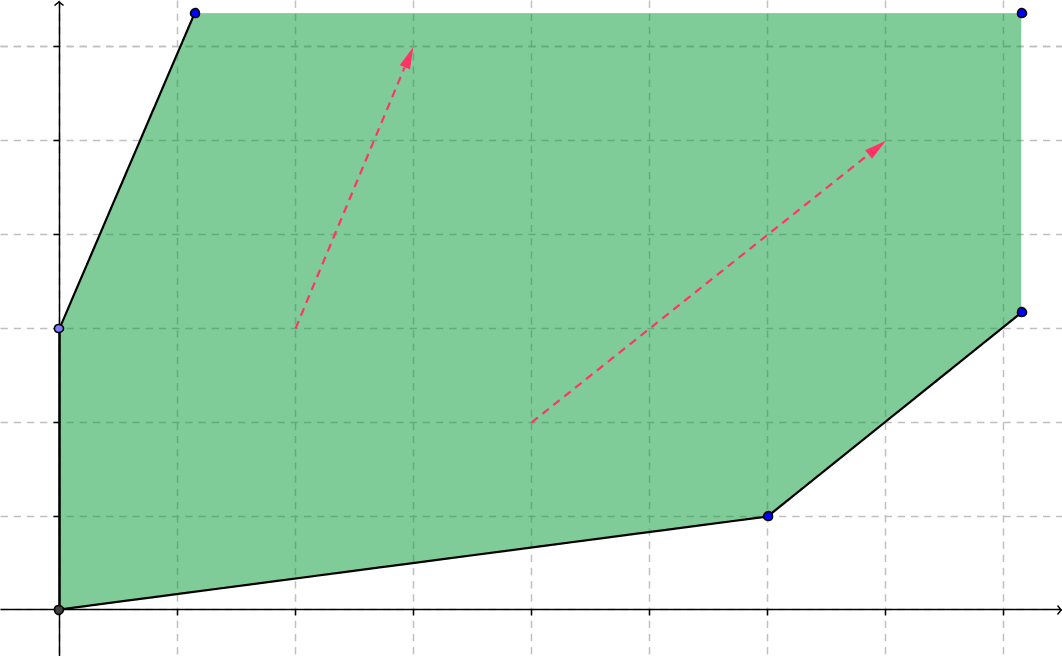 Again, we have a finite number of flat sides (the dark line segments) intersecting in vertices (the dots), and again the region is convex and closed. The arrows indicate recession directions, directions in which we can continue forever without leaving the polyhedron. (Any direction between those two is also a recession direction.) The presence of recession directions makes the question of whether the (continuous) objective function attains a maximum or minimum a bit trickier:

Finally, a word about the role of convexity. Consider the feasible region in Figure 3, which is a polytope but is not convex. 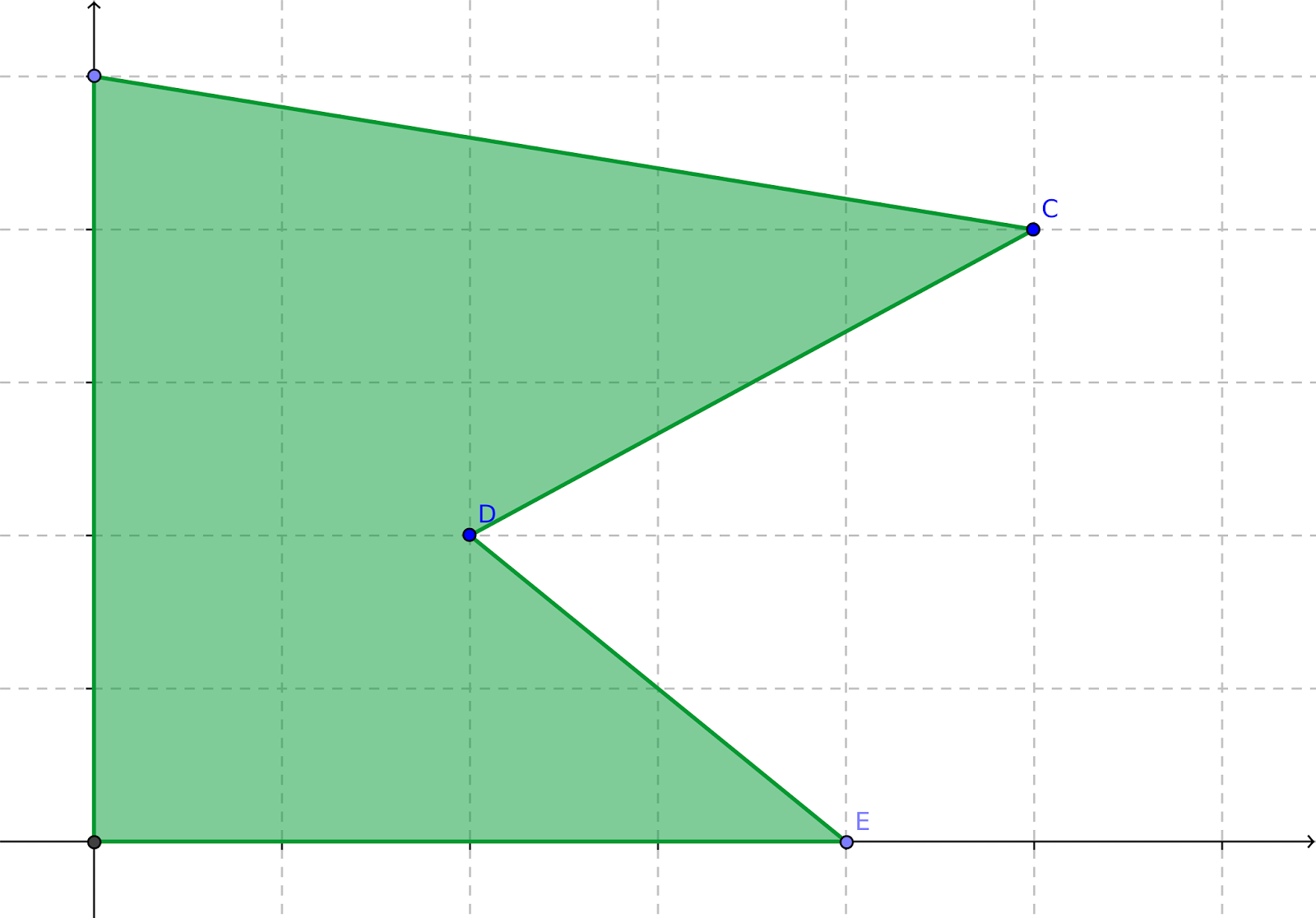 Suppose that we want to find the point furthest to the right (maximize \(x\), assuming that the horizontal axis represents \(x\) and the vertical axis represents a second variable \(y\)). The optimal solution is clearly at point C. Suppose further that we currently find ourselves at point E, which is a local optimum but not a global one. For any algorithm to get from E to C, it has to move in a direction that decreases \(x\) (making the objective function worse than at E, at least in the short run). That is a consequence of the fact that any line segment from E in the direction of C initially leaves the feasible region, which in turn follows from the lack of convexity. Most optimization algorithms (including the simplex algorithm) are not “smart” enough to do this; they tend to be myopic, moving only in directions that immediately improve the objective function. LPs are as tractable as they are in large part because their feasible regions are guaranteed to be convex.