This semester I have been working on analyzing the materials found near the Administration building on campus. This is an interesting assemblage because we have such a large range of materials. We have whiteware, porcelain, stoneware, yellow-ware, glass of all types and metal. Within the ceramics, we even have a wide range of decoration techniques including hand-painting, transfer print, flow blue, decals, gilding, edging and more. Given that the assemblage itself isn’t very large, it is an impressive range of artifacts that may be able to reveal some of MSU’s secrets. Here is a part of the analysis of the decorations and how it might help us better date this collection. 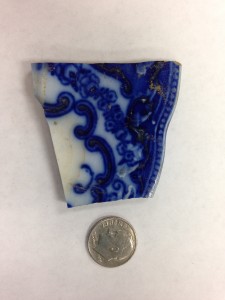 Flow Blue is a style of pattern found on white refined earthenware that originated during the 1820s in Staffordshire, England. The name “Flow Blue” was given to this pattern because of the way that the blue glaze blurs during the firing process. The pattern was very popular in America, but it only began being produced in the states in 1875. The pattern of the Flow Blue ceramics changes with popularity over time, and due to this we can more accurately date its use. During the 1830s, romantic landscapes were the most popular, and after 1850, the Willow pattern is the most common. After the 1870s, Japanese landscapes and styles gained popularity, and floral patterns were popularity from the 1860s to the early 20th century.

The pattern we have here is a floral flow blue pattern with a lightly scalloped edge. It was likely a plate or shallow bowl based on the curvature. Sadly we only have one small fragment of the piece so it is difficult to identify the specific pattern, and there is no maker’s mark to help determine manufacturer. Based on patterning, this piece likely dates between 1870 and 1920. 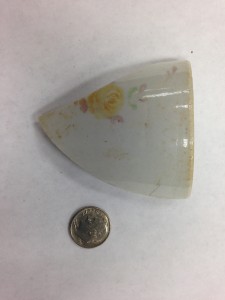 Decals were first introduced onto ceramics in 1890 as an easy and colorful form of decoration. It remained popular throughout the 1930s and continues to be used today. The decal is made up of three layers: the color or image which comprises the decorative design, a clear protective layer, and the backing paper on which the design is printed on by using lithography. Unlike Flow Blue techniques, decals have multiple bright colors and crisp lines between them. Americans were unable to produce their own decals until the 1930s, so they relied on imported ceramics or imported decals, and were unable to procure many before the 1900s.

The floral decoration this this ceramic sherd is a clear decal. Not only does it have crisp clear lines and colors, but if you rub your finger lightly over the image you can feel the edges of the decal. Given the availability and popularity of decals in the states, this piece likely dates between 1890 and 1930. 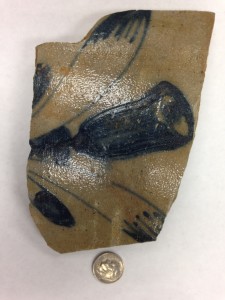 Stoneware crocks are a popular item for household use during the 19th century in North America, and can still be easily found in antique shops around the country. Stoneware pottery is easy to make in the states, can stand up to daily life and abuse, and isn’t porous like earthenwares. This specific piece can easily be identified by its salt-glaze; a glossy, translucent and orange peel like texture formed by throwing salt into the kiln during the firing process. In between firings, cobalt oxide would be applied to the pot to form bright blue decorations in a variety of hand-drawn shapes. Decorations range from flowers to animals, sprigs of leaves to quotations, name of the owners to birds.

This particular piece appears to either be some kind of flower- a calla lily or tulip perhaps, or if looked at from another angle, could be a bell with ribbon. Since these pieces were used over a long time period and decorations were personal rather than changing with fashion, it is difficult to assign this piece a date. The best we can say is that it was likely used during the 19th century and may have been kept beyond that date.