For the past several months, CAP fellow Amy Michael and I have been preparing a presentation for the UMass Amherst Cultural Landscapes and Heritage Values conference 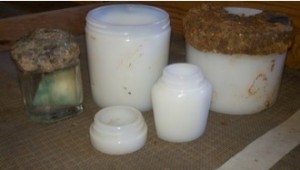 about gendered landscapes on MSU’s campus. What is a gendered landscape, you ask? A landscape can be considered “gendered” if there are discrete areas where accessibility is restricted between women and men. The purpose of our presentation is to determine whether or not we can predict which spaces on campus were used and maintained specifically by women using archaeological material recovered during CAP excavations. In addition to physical artifacts like shoes, buttons, and perfume bottles, we have utilized archival materials such as photographs, journals, and scrapbooks created by female students and preserved at MSU’s University Archives.

It is difficult to accurately identify gendered space based solely on material evidence. This is due mostly to the fact that the campus itself has changed considerably over time. That is, artifacts that may be associated with a gendered space are not necessarily recovered from those areas restricted to gendered use. To date, that vast majority of archaeological evidence for gender has been recovered from trash pits and shovel test sites. Because these assemblages are comprised of discarded materials, it is impossible to determine where they came from and therefore, impossible to predict which artifacts could be associated with a specific space on campus. 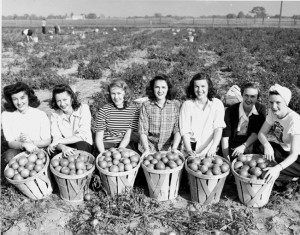 Archival evidence has allowed us to determine which areas of campus were frequented by women such as Morrill Hall. Morrill Hall was originally used as a women’s dormitory, as well as holding classes and a gymnasium. Photographic evidence and student journals have informed us that other areas, such as the Victory Gardens and the Red Cedar River were commonly used as meeting places for female students. Artifact evidence from these areas is lacking, however, due to the demolition of Morrill Hall, cleaning of the landscape around the Victory Gardens, and natural processes such as erosion along the banks of the Red Cedar River. 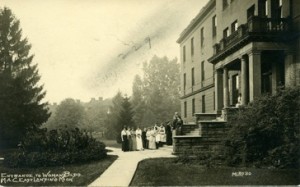 One issue we seek to address is to determine how the overlapping or intrusion of female spaces into areas traditionally reserved for male students affected interactions between women and men on campus. What were the reactions to these changing landscapes? Further, we seek to understand whether female students largely remained in those areas reserved specifically for them, or if there were alternative opportunities for wider access to campus (even in the face of university or social restrictions). Finally, we hope to identify and understand which types of material evidence, if any, recovered by Campus Archaeology can be considered gendered.