This is the title of a talk written by John Dewey given at the celebration of his 80th birthday held in New York on October 20, 1939. The context of course was America climbing out of the Great Depression and on the edge of entering a war unraveling in Europe.

As I am coming to the end of the recent 500pp. intellectual biography of Dewey, The Education of John Dewey by Jay Martin,  I was stirred by the mention and purported focus of this speech, which was delivered by a friend. Enough so that I tracked it down on the internet this morning. You could read the four page speech here and I highly recommend it. 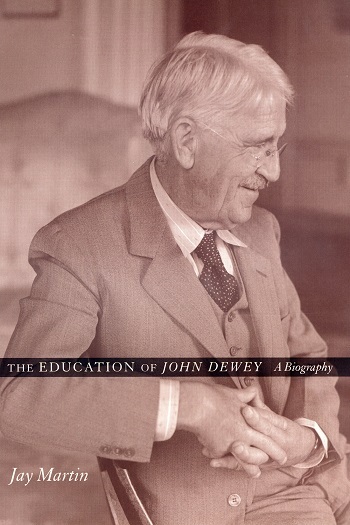 Remember Dewey has been considered one of America’s greatest philosophers. His long-time emphasis  on democracy and education are clearly in full view in this piece. He was not an armchair philosopher, although he could hold his own with any of his contemporaries. He was involved with the founding of the American Civil Liberties Union, American Association of University professors, and the National Association for the advancement of Colored People.

Born just before the Civil War in 1859, he was to live and be active until his death in 1952, almost a century. His long view provides a rare and deep look at what democracy was and could be. In the spirit of this blog that attempts to provide a window into “possibilities”, Dewey believed in the possibility of a deeper democracy and the evolution of human society through education.

A few excerpts from this talk may perhaps whet your appetite to read the full piece. What is clear to this reader, is that his words from three-quarters of a century ago are at least as timely and as necessary to be considered and reflected on today as they were then.

At the present time [1939] the frontier is moral not physical. The period of free lands that seemed boundless in extent has vanished. Unused resources are now human rather than material. They are found in the waste of grown men and women who are without the chance to work, and in the young men and young women who find doors closed where there was once opportunity. The crisis that one hundred and fifty years ago called out social and political inventiveness is with us in a form which puts a heavier demand on human creativeness.
At all events this is what I mean when I say that we now have to re-create by deliberate and determined endeavor the kind of democracy which in its origin one hundred and fifty years ago was largely the product of a fortunate combination of men and circumstances. We have lived for a long time upon the heritage that came to us from the happy conjunction of men and events in an earlier day. The present state of the world is more than a reminder that we have now to put forth every energy of our own to prove worthy of our heritage. It is a challenge to do for the critical and complex conditions of today what the men of an earlier day did for simpler conditions.

If I emphasize that the task can be accomplished only by inventive effort and creative activity, it is in part because the depth of the present crisis is due in considerable part to the fact that for a long period we acted as if our democracy were something that perpetuated itself automatically; as if our ancestors had succeeded in setting up a machine that solved the problem of perpetual motion in politics. We acted as if democracy were something that took place mainly at Washington and Albany – or some other state capital – under the impetus of what happened when men and women went to the polls once a year or so-which is a some-what extreme way of saying that we have had the habit of thinking of democracy as a king of political mechanism that will work as long as citizens were reasonably faithful in performing political duties…

…Democracy as a personal, an individual, way of life involves nothing fundamentally new. But when applied it puts a new practical meaning in old ideas. Put into effect it signifies that powerful present enemies of democracy can be successfully met only by the creation of personal attitudes in individual human beings; that we must get over our tendency to think that its defense can be found in any external means whatever, whether military or civil, if they are separated from individual attitudes so deep-seated as to constitute personal character.

…I am inclined to believe that the heart and final guarantee of democracy is in free gatherings of neighbors on the street corner to discuss back and forth what is read in uncensored news of the day, and in gatherings of friends in the living rooms of houses and apartments to converse freely with one another. Intolerance, abuse, calling of names because of differences of opinion about religion or politics or business, as well as because of differences of race, color, wealth or degree of culture are treason to the democratic way of life.

First published in John Dewey and the Promise of America,
Progressive Education Booklet No. 14 (Columbus,
Ohio: American Education Press, 1939), from an address read by Horace M. Kallen at the dinner in honor of Dewey in New York City on 20 October 1939; reprinted in The Later Works,Vol. 14.
Found at: http://www.beloit.edu/~pbk/dewey.html
Tweet
The following two tabs change content below.